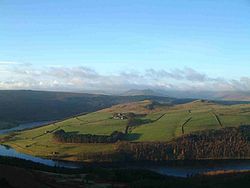 Crook Hill seen from Whinstone Lee Tor on Derwent Edge, Lose Hill and Mam Tor are in the distance.

Crook Hill is a small hill in the Peak District National Park in the English county of Derbyshire. It is located five kilometres north east of Castleton.

The hill is situated above the A57 Snake Pass road between Sheffield and Manchester as it passes Ladybower Reservoir. Crook Hill is regarded as an outlier of Kinder Scout although the two are separated by the long western arm of Ladybower Reservoir. The hill has twin summits, the highest of which reaches a modest height of 382 metres while the secondary top (sometimes referred to as Ladycrook Hill, although this name does not appear on Ordnance Survey maps)[citation needed] attains an altitude of 374 metres. Geologically, the hill consists of Kinder Scout Grit which is a kind of Sandstone.[1] Both the hill’s summits give excellent views of the surrounding countryside with Ladybower Reservoir, Derwent Edge and Win Hill being the main attractions. Between the two summits there is some evidence of an ancient megalithic standing stone circle. The circle originally consisted of five stones around a surviving mound of which only two still remain upright.[2]

Crook Hill is normally climbed from the Derwent valley road just as it leaves the A57: a bridleway leaves the small car park at grid reference SK190871 and climbs steeply and muddily up to Crookhill Farm, a working sheep farm owned by the National Trust which also offers accommodation to tourists. Once the farm is passed, a stile is climbed onto the open sheep pasture and it is then a straight-forward walk to the two twin summits which are actually on private land although there are no access problems.