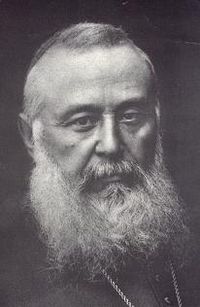 Charles Martial Lavigerie, founder of the religious Society of the White Fathers

The missionary society known as "White Fathers" (Pères Blancs in French), after their dress, is a Roman Catholic Society of Apostolic Life founded in 1868 by the first Archbishop of Algiers, later Cardinal Lavigerie, as the Missionaries of Our Lady of Africa of Algeria, and is also now known as the Society of the Missionaries of Africa. Members of the society use the post-nominal initials M. Afr.

The famine of 1867 left a large number of Arab orphans, and the education and Christian instruction of these children was the occasion of the founding of the society; but from its inception the founder had in mind the conversion of the Arabs and the peoples of Central Africa. Missionary posts were established in Kabylie and in the Sahara. In 1876 and in 1881 two caravans from South Algeria and R'dames, intending to open missions in Sudan, were massacred by their guides. In 1878 ten missionaries left Algiers to establish posts at Lakes Victoria, Nyanza and Tanganyika. These now form the present Archdioceses of Kampala, Gitega, Tabora, and the dioceses of Kigoma, Lilongwe, and Kalemie-Kirungu. In 1894 the mission of French Sudan (now Mali) was founded, now the Archdiocese of Bamako.

The missions of the Sahara are grouped in a prefecture Apostolic. In 1880, at the request of the Holy See, the White Fathers established at Jerusalem a Greek-Melkite seminary for the formation of clergy of the Melkite Catholic Church. The society is composed of missionary priests and coadjutor brothers. The members are bound by an oath engaging them to labour for the conversion of Africa according to the constitutions of their society. The missionaries are not, strictly speaking, a religious order, and may retain their own property; but they may expend it in the society only at the direction of the superiors. One of the chief points in the rule is in regard to community life in the missions, each house being obliged to contain no fewer than three members. At the head of the society is a superior-general, elected every six years by the chapter. He resides at Maison-Carree near Algiers. Those desiring to become priests are admitted to the novitiate after their philosophical studies, and one year of general theology. The three last years are spent at the scholasticate of Carthage in Tunis. The society admits persons of all nationalities. Recruiting houses are found in Quebec, Belgium, Luxembourg, Holland, Germany, and France, in which are received those not yet ready for the novitiate.

The habit of the missionaries resembles the white robes of the Algerian Arabs and consists of a cassock or gandoura, and a mantle or burnous. A rosary and cross are worn around the neck in imitation of the mesbaha of the marabouts.

The society depends directly on the Congregation for the Evangelization of Peoples. The White Fathers succeeded in establishing small missions among the Kabyle Berbers, there being at present nine hundred and sixty-two Christians; but the regions bordering on the Great Lakes and Sudan show the best results. The number of neophytes in all the vicariates (as of June 1909) was 135,000; the number preparing for baptism 151,480. A test of four years is imposed on those desiring to be baptized. To religious instruction the missionaries add lessons in reading and writing, and teach also, in special classes, the tongue of the European nation governing the country, which was mostly French in these aerias. The brothers train the young people for trades and agriculture. The number of boys in the schools (June, 1909) was 22,281.

In January 2006, the society numbered; 9 bishops, 1,498 priests, 156 brothers; 16 clerics with perpetual oath, and 5 associates. There were 354 students preparing to enter the society.

Cypress Grove House, home of the White Fathers in Ireland

It has been noted by several authors (e.g. Philip Jenkins' The Future of Christendom) that the growth of the Church in Africa is so dynamic that it may represent the future of Catholicism. In contrast to the United States and Western Europe, vocations to the priestshood and the religious life are on the increase, moreover the average age of priests and religious declines each year, the number of religious communities, parishes and dioceses is increasing each year.[citation needed]

The Missionaries of Africa are turning over to the African clergy the care of those Churches where the Gospel has been heard and are devoting themselves to those who have not heard the Gospel message.

Christian Development of the Laity

Notwithstanding the increase in African vocations, a very large percentage of African Christians cannot celebrate the Eucharist every Sunday and feast day. In these areas the Church is led by lay leaders who gather the people to pray. They effectively run the Church in their villages. The education and support of these lay leaders is a priority for the Missionaries of Africa and the entire Church in Africa. Also a priority is the deepening of the Faith among the educated and elite classes in Africa.[citation needed]