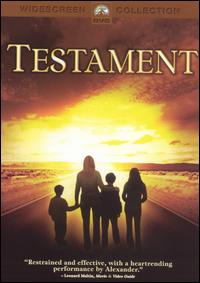 "Testament" is a 1983 directed by and starring . Originally produced for television's "" series, it was given a theatrical release instead (although PBS did subsequently air it a year later). Coincidentally, , the film's distributor, is now also the distributor for product.

The film tells the story of how one small town near slowly falls apart after a nuclear war destroys outside civilization.

Based on "The Last Testament" by Carol Amen, the film script was by John Sacret Young, who would later create the television series "". Jane Alexander was nominated for the for her performance.

The movie follows the lives of the Wetherly family – husband Tom (), wife Carol (), and children Brad (), Mary Liz (), and Scottie (), who live in the fictional an town of Hamlin, California. The town is a pleasant, well-to-do community within commuting distance to San Francisco, where Tom works.

On one sunny day, Carol, who is a housewife and stay-at-home mother, listens to an answering machine message from Tom telling her he's on his way for dinner, as Scottie watches "" (another PBS program). The show is suddenly replaced by snow as the signal is lost, and teenage son Brad hits the television, thinking it to be the cause of the problem. But suddenly a comes on to announce the true cause:

"This is San Francisco. We have lost our New York signal. Radar sources confirm the explosion of nuclear devices, there in New York, and up and down the East Coast. Ladies and gentlemen, this is real. This is ..."

The anchorman is then cut off by the hum. The announcer states that the is interrupting the program and asks people to stay off their phones. As the speaker introduces the (who is never seen), the phone rings but goes dead just as Carol answers it. The flash of a nuclear detonation is then seen through the window, and Carol huddles with her children on the living room floor as the town's air raid sirens sound.

Hamlin survives unscathed because apparently the town is far enough away from San Francisco to avoid heat and blast damage. The movie never sets up any background to explain the attack; none of the characters speak of any national or international events prior to the attack.

That night, scared residents meet at the home of Henry Abhart (), an elderly ham radio operator who has made contact with survivors elsewhere. He tells Carol, who has relatives in , that he has been unable to reach any station east of , and another operator said an errant bomb hit because trees and rocks are falling from the sky.

Despite Abhart's best efforts, neither the cause of the attack nor the responsible parties are ever identified. Rumors from other radio operators range from a Soviet preemptive strike to .

A school play about the was in rehearsal before catastrophe hit, and, desperate to recapture some normalcy and to divert the children's attention from a reality too horrible to contemplate, the town decides to go on with the show. In the earlier rehearsal scenes, life was normal, the future shone brightly in the children's faces. Now, as the parents watch the performance, they see no future for these beautiful innocents.

Although Hamlin escapes any bomb damage, the town experiences significant from fallout. Residents start dealing with the loss of municipal services and shortages of food and gasoline, and eventually the loss of loved ones to radiation sickness. As the movie progresses, wood for caskets is instead used for funeral pyres as the dead accumulate faster than they can be buried.

Scottie succumbs first, and is buried in the back yard, but Carol screams at the Catholic priest () who starts the funeral that she won't bury Scottie without his favorite . Several scenes later, Carol is seen sewing bed sheets, which as the camera cuts to a wider view reveals is a for her daughter, Mary Liz.

Although people die throughout the movie, the movie hints that many are children. One young couple, Phil and Cathy Pitkin ( and ), leave town after losing their infant.

In one particularly heartbreaking scene, Carol listens to Tom's voice on the one last time before she removes its batteries for other uses.

Brad is forced into an early adulthood, from helping his mother to taking over radio duty for Henry Abhart, who also sickens and dies from radiation sickness. The family essentially adopts a boy named Hiroshi when his father, Mike, who runs the local gas station, dies. Before the war, Tom would take Hiroshi fishing with the other Wetherly kids.

Carol, Brad and Hiroshi attempt by sitting in the family station wagon with the garage door closed (), but Carol cannot bring herself to do it. The movie ends with the three sitting by candlelight for a birthday, but the cake is a graham cracker. Hiroshi presents Carol with Scottie's teddy bear, but does not say where he found it. When Brad asks his mother what they should wish for, she answers, "that we remember it all ... the good and the awful." She blows out the candle, and the movie cuts to an old silent film of a surprise birthday party for Tom. He blows out the candles on his cake as the movie ends.