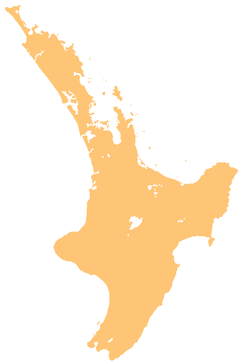 Hastings
Locations of Napier & Hastings on the North Island

The Napier-Hastings Urban Area is a New Zealand urban area that covers the twin cities of Napier and Hastings. It is the fifth largest urban area in the country with a population of over 128,600. This is closely followed by Tauranga (116,000), and Dunedin (114,900).

While the two cities remain separated by 10km of rural land, there is sufficient economic and social integration between the cities for Statistics New Zealand to aggregate them into a single unit. However, like the urban areas of Auckland, Hamilton and Wellington, the Napier-Hastings urban area is subdivided into urban zones. Both zones have a population of around 60,000. The urban area contains around three quarters of the population of the entire Hawke's Bay.

Amalgamation is currently a major issue for Napier and Hastings residents, mainly due to local body elections. Both cities had previously had smaller amalgamations (Napier absorbed Taradale, Hastings absorbed Havelock North), and even a referendum on a joint Hastings and Napier in 1999. This referendum resulted in 75% 'no' vote from Napier residents, and a 64% 'yes' vote from Hastings residents. Many say the referendum was called too early and many Napier residents were still bitter about the closing of Napier Hospital in 1998 and making Hastings Hospital the only public hospital in the region. The momentum is growing though as the majority of the residents see the benefit of a stronger unity of being 'officially' considered a single entity that would be larger than Tauranga and Dunedin. The plan for the new council is to also absorb the Wairoa and Central Hawkes Bay councils to make a super regional council of 150,000 people.

Part of recognition of New Zealand's 5th largest population centre is being labelled that way. Many residents have bought forth renaming the city to reflect this to the rest of the nation instead of referring to the cities by their current separate names. Names proposed include:

Although the Napier Urban Zone has a smaller population than Hastings Urban Zone, Napier is traditionally seen as the capital of the Hawke's Bay. This is partly historical as Napier was the seat of the provincial government of the 'Hawkes Bay Province'. The continued perception of Napier being larger is partly because Hastings' population is divided between Hastings proper and its satellite towns of Flaxmere and Havelock North (separated from the main urban core by small rural tracts of land). This was originally the case with Napier and Taradale but was subject to intense development of residential suburbs to spread slowly south towards Taradale and Greenmeadows (17,000 pop).

Napier also hosts the regions only port (the far majority of export coming from Hastings' industry and food processing), the regions only domestic airport, the region's High Court, the local polytechnic college, and the Hawkes Bay Regional Council Headquarters. Napier, due to its more 'boutique' feel, attracts a larger concentration of national chain stores compared to Hastings, which would be unusual for a city of over 70,000 if not so closely located.

Hastings Urban Zone is completely within Hastings District and includes Havelock North, Flaxmere, Clive and Haumoana. The Hastings District Council consists of almost half of the total population of Hawke's Bay, with 74,000 people. The main urban zone of Hastings however contains around 60,000 of this (Hastings Central at 30,000, Havelock North at 10,000, Flaxmere at 10,000, and various smaller settlements with in the immediate Hastings area, ie not including settlements and rural communities in the former Hawkes Bay County Council).