The term hill states means states in a hilly area. In particular it is used for two northern border regions of colonial British India.

During the Raj period, two groups of princely states in the Indian part of the colonial province of Punjab (after independence split in the republic's constituent states of Punjab (proper), Haryana and Himachal Pradesh) were included into British India later than most of the Mughal Empire, in the context of two wars and an uprising.

For its princely rulers the term Hill Rajas (not an actual title) has been coined. 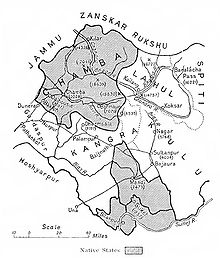 28 petty princely states (including feudatory princes and zaildars) in the promontories of the western Himalaya, known in full as the Simla Hill(s) States, mainly Hindu, a few Buddhist; the local languages are Hindu, Punjabi, Urdu and various Pahari dialects.

Three quarters of the about 4,800 square miles (12,000 km2) was the territory of the Raja (earlier Rana) of Bashahr, on both sides of the Sutlej river. Its direct tributaries were:

The other, all far smaller, princely states, including a few with some petty dependencies of their own, were further south, on Sutlej's left bank:

Remark that for various of the entities above the authentical title of the chief is missing- while some of the lowest ranking may have none, for the princes that can merely be due to insufficient sources available

They too were all to be joined as the modern Indian state Himachal Pradesh.

Nearby, some Hindu ?&sikh states, including:

The 12 Chiefs of the elaka (tribal province) of the Jaintia, a Khasi subtribe of the) Pantars = Syntengs tribes, are styled Dolloi, and the land is called after them in Khasi: KA RI KHADAR DOLLOI ‘Land of 12 Tribal Chiefs‘) - they are in Nartiang itself (see the Raja, uniquely also styled, as premier Chief: U Kongsong), and in Amwi, Jowai, Lakadong, Mynso, Nongbah, Nongjngi, Nongphyllut, Nongtallang, Raliang, Shangpung, Sutnga (see below; also cited as seat of a Syiem)

Above them is the only true princely ruler of the area, the Raja of Jaintiapur, actually his winter capital, now in Bangladesh, with his summer residence shifted from Sutnga (where the family started as Syiems) to Nartiang; also a palace in the commercial center Borghat.