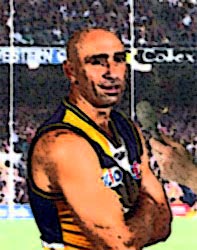 Matera is widely regarded as the finest wingman of his generation and one of the best wingmen of all time. His remarkable skills and ability to seemingly make something out of nothing made him one of the truly elite players of the 1990s. Matera is nicknamed 'Roo', dubbed so by team mate Chris Lewis due to his supposed like appearance. He wore the number 30 for the majority of his career with West Coast.

Hailing from the West Australian country town of , Matera was born of an Italian father. He has 7 siblings (Wally, Frank, Mike, Gino, Phil, Gerard and Carmillo), two of which were his older brother , and younger brother , who both played football at the elite level. Matera played soccer as a youngster and was influenced by the success of Wally in playing .

Matera was recruited from South Fremantle in the WAFL with the 4th selection the in the 1989 National draft and made his debut in 1990 for West Coast. Playing just 5 games in his debut season for the Eagles, Matera broke through as a star youngster in 1991, finishing 4th in the Brownlow medal and earning honors. Matera followed up with an excellent 1992, unlucky to miss AA honors once more but capped off the season with an outstanding finals series.

Peter Matera permanently etched his name into footy folklore with his outstanding performance in the 1992 Grand Final. The West Coast Eagles captured their first premiership on the back of Matera's excellent 5 goal effort from the Wing. The image of Matera 'setting sail for home' is considered by many to be the definitive moment in West Coast history. Matera collected the Norm Smith Medal for his best on ground performance.

Matera continued to establish himself as one of the games legitimate stars and most dangerous players throughout the mid 1990s. His outstanding goal sense and reading of the play made Matera a true game breaker. Selected as an All-Australian again in 1993 and 94, Matera also was something of a surprise runner up in the 1994 count. Recording an outstanding 28 votes (including 4 straight best of ground performances) Peter finished just 2 votes shy of winner . This remains the highest ever recorded amount of votes to not win the prestigious medal (excluding the short lived vote changes in 1976/77). Although Matera would not receive this honor in his career, he was often a fixture at the top of the count throughout his career. Peter Matera was also a key member of West Coast's 2nd premiership team in 1994 - while he did not repeat his 1992 heroics, it was later revealed he played the Grand Final under much duress due to a stress fracture in his leg.

With his trademark speed on the decline, 1996 saw Peter Matera reinvent himself as a half back flank with great success. This part of his career is often overshadowed by his outstanding years as a wingman but Matera made a fine defender and once again enjoyed All Australian status in 1996 and 97. Matera was named on a wing in West Coast's team of the decade in 1996.

1996 also saw Matera joined at West Coast by his younger brother Phillip. A fine player in his own right, Phillip was a speedy forward pocket who emerged from his brother's shadow later in his career to be regarded as one of the better goal sneaks of his time. Affectionately known as 'Fido', Phil Matera retired after the 2005 season playing 179 games and kicking 389 goals for West Coast.

After 4 top 5 finishes in the strong West Coast team of the 1990s, Matera won his first award in 1997. Finishing 2 votes clear of fellow Eagles' Champion . Despite only winning the award once, Matera's consistency throughout the 1990s elevates his status amongst West Coast greats.

The most controversial moment of Peter Matera's career came in late 1997 when he shocked the football world by declaring his intentions to leave the West Coast Eagles and join the via the preseason draft for the 1998 season. Citing a desire to play more at the , Matera's announcement triggered major public outcry in and saw many of his long time Eagles team mates, including Captain visit Matera's home (which was staked out by the media). Days after news of Matera's defection broke, Peter did a back flip, agreeing to stay on at the West Coast Eagles. While he remained in the blue and gold for the rest of his career, many believed his form slump in 1998 was a result of the extreme pressure he was placed under as a result of his decision to originally leave the club.

As is common amongst the majority of footballers, Matera's form declined once he reached his 30s. Most of his premiership team mates retired around him leaving Matera one of only a handful of experienced Eagles left by the turn of the century - Matera was named a vice captain of the club in 1999, holding this position for 3 seasons. The teams fortunes took a turn for the worse in 2000 and 2001, missing the finals for the first time since 1989. Matera, while still finishing top 10 in the Club Champion award was not the outstanding performer he was in his prime. 2002 saw the return to the club of legendary Eagles Captain , this time in the role of senior coach. Worsfold's return saw the side return to the finals and saw Matera, aged 33, regain some fine form and it appeared he may play on in 2003. To some surprise and disappointment, late in the preseason of 2003 Peter Matera drew the curtain on his illustrious career, succumbing to a persistent thigh injury which had rendered him unable to reach peak fitness.

Peter Matera played 253 games for the and kicked 218 goals over 13 seasons. He also played 60 games for South Fremantle and represented Western Australia in state football on 5 occasions. 'Roo' will be remembered as a true Champion of the game and possibly the greatest ever West Coast Eagle to date.

In August 2005, Peter Matera was named on the wing of the . Matera said of this honor -

"Stephen Michael was my idol as a kid, and we used to hear all about how good 'Polly' Farmer was so to be recognised with them is an honor."

After leaving the football world following his retirement, Matera dabbled in coaching in South Western WA before signalling his intentions to return to the game in a larger capacity. Despite being linked by some to the vacant Assistant coaching position at West Coast, Matera has taken on an assistant coaching and mentoring role at the in the WAFL for the 2006 season.

On June 22nd 2006, Matera became the first ever career West Coast Eagle to be inducted into the . Considered one of the highest honours in Australian Football, Matera was pleased to receive the recognition -

"To be inducted in the highest level of football and accolades as in the Hall of Fame is one of those things that just caps off my career," Matera said. "This more or less finishes my career on a high."