The Shan States were the princely states that ruled large areas of today's Burma (Myanmar), Yunnan Province in China, Laos and Thailand from the late 13th century until mid-20th century. The term "Shan States" was first used during the British colonial period as a geopolitical designation for certain areas of Burma (officially, the Federated Shan States, consisted of today's Shan State and Kayah State). In some cases, the Siamese Shan States was used to refer to Lan Na (northern Thailand) and Chinese Shan States to the Shan regions in southern Yunnan such as Xishuangbanna.

The first founding of Shan states inside the present day boundaries of Burma began during period of Pagan Kingdom in the Shan Hills and Kachin Hills and accelerated after the fall of Pagan Kingdom to the Mongols in 1287. The Shans, who came down with the Mongols, stayed and quickly came to dominate much of northern to eastern arc of Burma—from northern Chin State and northwestern Sagaing Region to the present day Shan Hills. The newly founded Shan States were multi-ethnic states that included a substantial number of other ethnic minorities like the Chin, Palaung, Pa-O, Kachin and Burmans. The most powerful Shan states were Mohnyin (Mong Yang) and Mogaung (Mong Kawng) in present-day Kachin State, followed by Theinni (Hsenwi), Thibaw (Hsipaw), Momeik (Mong Mit) and Kyaingtong (Keng Tung) in present-day northern Shan State.[1]

The Shan States were a dominant force in the politics of Upper Burma throughout 13th to 16th centuries. Strongest Shan States, Mogaung, Mohnyin and Theinni, constantly raided Upper Burma. Mogaung ended the kingdoms of Sagaing and Pinya in 1364. The Mohnyin-led Confederation of Shan States captured the Ava Kingdom in 1527 and ruled Upper Burma until 1555.

Nonetheless, Shan States were too fragmented to resist the encroachment of bigger neighbors. In the north, Ming China annexed today's Yunnan in the 1380s, stamping out final Shan resistance by the 1440s. In the south, Burma captured all the Shan States that would become known as Burmese Shan States in 1557. Though Shan States came under the suzerainty of Irrawaddy valley-based Burmese kingdoms from then on, the Shan saophas (chiefs) retained a large degree of autonomy.

The first founding of Shan states inside the present day boundaries of Burma began during period of Pagan Dynasty. The first major Shan State was founded in 1215 at Mogaung, followed by Mone in 1223. These were part of the larger Tai migration that founded the Ahom Kingdom in 1229 and the Sukhothai Kingdom in 1253.[2] The Shan migration accelerated after the Mongols overran Pagan in 1287. The Shans, who came down with the Mongols, stayed and quickly came to dominate much of northern to eastern arc of Burma—from northwestern Sagaing Division to the present day Shan Hills. The newly founded Shan States were multi-ethnic states that included a substantial number of other ethnic minorities like the Chin, Palaung, Pa-O, Kachin and Burmans.

The following is a list of major Shan States. 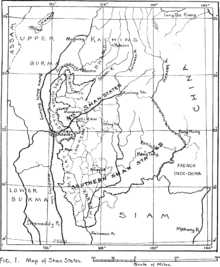 The enlarged Confederation extended its authority down to Prome (Pyay) in 1533 by defeating their erstwhile ally Prome Kingdom because Sawlon felt that Prome did not provide sufficient help in their war against Ava. After the Prome war, Sawlon was assassinated by his own ministers, creating a leadership vacuum. Although Sawlon's son Thohanbwa naturally tried to assume the leadership of the Confederation, he was never fully acknowledged as the first among equals by other saophas.

An incoherent confederation neglected to intervene in the first four years of Toungoo–Hanthawaddy War (1535–1541) in Lower Burma. They did not appreciate the gravity of the situation until 1539 when Toungoo defeated Hanthawaddy, and turned against its vassal Prome. The saophas finally banded together and sent in a force to relieve Prome in 1539. However, the combined force was unsuccessful in holding Prome against another Toungoo attack in 1542.

In 1543, the Burmese ministers assassinated Thohanbwa and placed Hkonmaing, the saopha of Thibaw, on the Ava throne. Mohnyin leaders, led by Sithu Kyawhtin, felt that the Ava throne was theirs. But in light of the Toungoo threat, Mohnyin leaders grudgingly agreed to Hkonmaing's leadership. The Confederation launched a major invasion of Lower Burma in 1543 but its forces were driven back. By 1544, Toungoo forces had occupied up to Pagan. The confederation would not attempt another invasion. After Hkonmaing died in 1546, his son Mobye Narapati, the saopha of Mobye, became king of Ava. The confederation's bickering resumed in full force. Sithu Kyawhtin set up a rival fiefdom in Sagaing across the river from Ava and finally drove out Mobye Narapati in 1552.

The weakened Confederation proved no match for Bayinnaung's Toungoo forces. Bayinnaung captured Ava in 1555 and conquered all of Shan States in a series of military campaigns from 1556 to 1557.