John Byrom or John Byrom of Kersal or John Byrom of Manchester FRS (29 February 1692 – 26 September 1763) was an English poet and inventor of a revolutionary system of shorthand. He is also remembered as the writer of the lyrics of Anglican hymn Christians Awake, salute the happy morn.

John Byrom was descended from an old genteel Lancashire family. A Ralph Byrom came to Manchester from Lowton in 1485, and became a prosperous wool merchant. His son Adam acquired property in Salford, Darcy Lever, Bolton and Ardwick (though his wealth did not prevent his mentally ill daughter from being accused of witchcraft). Edward Byrom helped to foil a Royalist plot to seize Manchester in 1642.

Byrom was born at what is now The Old Wellington Inn (part of the Old Shambles), Manchester, in 1692, (The property was then used as an office for market tolls, with accommodation on the upper floors.) The Wellington Inn is now a major tourist attraction, and his birth is commemorated by a plaque in the bar area. However, some sources claim that he was born at Kersal Cell in Lower Kersal in the township of Broughton, near Salford just outside Manchester. According to Bailey[1] he was one of the tallest men in the kingdom.

His privileged background enabled him to obtain an excellent education, including The King's School, Chester, Merchant Taylors' School, London. He studied at Trinity College, Cambridge, becoming a fellow there in 1714, and subsequently travelled abroad and studied medicine at Montpellier in France.[2] 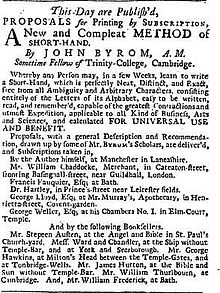 Newspaper advertisement for Byrom's shorthand system from the Daily Gazetteer, 1741

Byrom invented a system of shorthand,[3] and having perfected this, he returned to England in 1716. Some of the inhabitants of Manchester tried to persuade him to set up a medical practice in the town, but he decided that his abilities were insufficient to pursue a medical career and resolved to teach his shorthand system instead. Shortly after coming into his family inheritance in 1740, Byrom patented his "New Universal Shorthand". This system of shorthand was taught officially at both Oxford and Cambridge Universities and was used by the clerk in the House of Lords.

On June 16, 1742, His Majesty George II secured to John Byrom, M.A., the sole right of publishing for a certain term of years (21) the art and method of shorthand invented by him.

His system of shorthand was posthumously published as "The Universal English Shorthand" which, although superseded in the nineteenth Century, marked a significant development in the history of shorthand.[3] It was used by John (1703–1791) and Charles Wesley (1707–1788), founders of Methodism, who recorded their self-examinations in coded diaries[4]

The ancestral home of the Byrom Family is Byrom Hall at Slag Lane in Lowton, (the lane facing the hall is called Byrom Lane). He lived here from time to time, but seems to have largely resided in a town house in Manchester and at Kersal Cell.

Byrom had several children, but his favourite was his daughter Dorothy, known as Dolly. In December 1745, after a romp with Dolly, he promised to write her something for Christmas; it was to be written especially for her, and no one else. The delighted Dolly reminded her father of his promise each day as Christmas grew nearer. On Christmas morning, when she ran down to breakfast, she found several presents awaiting her. Among them was an envelope addressed to her in her father's handwriting. It was the first thing she opened, and to her great delight, it proved to be a Christmas carol entitled "Christians awake! Salute the happy morn". The original manuscript is headed "Christmas Day for Dolly", and it was first published in Harrop's Manchester Mercury in 1746.

Although Byrom is probably best remembered for this Christmas Carol, he was regarded by his contemporaries as a poet and a literary man. Most of his poems, the best-known of which is My spirit longeth for Thee, were religious in tone. He is also remembered for his epigrams, and, above all, his coinage of the phrase Tweedledum and Tweedledee (in connection with a dispute about the merits of two composers).

A man of mystery

Byrom did not lead an ordinary provincial life. He was a member of the Royal Society while Sir Isaac Newton was president, and moved in some very influential social and intellectual circles in the capital and elsewhere. Modern research has revealed him to be something of a man of mystery. In the first place there is the question of his political views. It was once thought that he was a closet Jacobite, but it is now suggested that he may have acted as a double agent, the 'Queen's Chameleon'. When the Young Pretender briefly occupied Manchester in 1745, he certainly did his best to lie low. His views might be summed up in the verse that he composed, in the form of a toast.

God bless the King! (I mean our faith's defender!)
God bless! (No harm in blessing) the Pretender.
But who Pretender is, and who is King,
God bless us all! That's quite another thing!

Byrom died in 1763 and is buried in the Jesus Chapel, Manchester Cathedral, Manchester, England. His papers, though preserved for some time after his death, were mysteriously destroyed in the nineteenth century. A few surviving items have suggested that he may have belonged to an early proto-masonic society, similar to the Gentleman's Club of Spalding, and pursued occult interests. His library of books and manuscripts was donated to Chetham's Library by his descendant Eleanora Atherton in 1870.[5]