Methanethiol (also known as methyl mercaptan) is a colorless gas with a smell like rotten cabbage. It is a natural substance found in the blood and brain of humans and other animal as well as plant tissues. It is disposed of through animal feces. It occurs naturally in certain foods, such as some nuts and cheese. It is also one of the main chemicals responsible for bad breath and the smell of flatus. The chemical formula for methanethiol is CH3SH; it is classified as a thiol. It is sometimes abbreviated as MeSH.

Methanethiol is released from decaying organic matter in marshes and is present in the natural gas of certain regions, in coal tar, and in some crude oils.

In surface seawater, methanethiol is the primary breakdown product of the algal metabolite dimethylsulfoniopropionate (DMSP). Marine bacteria appear to obtain most of their protein sulfur by the breakdown of DMSP and incorporation of methanethiol, despite the fact that methanethiol is present in seawater at much lower concentrations than sulfate (~0.3 nM vs. 28 mM). Bacteria in oxic and anoxic environments can also convert methanethiol to dimethyl sulfide (DMS), although most DMS in surface seawater is produced by a separate pathway. Both DMS and methanethiol can be used by certain microbes as substrates for methanogenesis in some anaerobic soils.

Methanethiol is a weak acid, with a pKa of ~10.4. This acidic property makes it reactive with dissolved metals in aqueous solutions. The environmental chemistry of these interactions in seawater or fresh water environments such as lakes has yet to be fully investigated.

The United States material safety data sheet (MSDS) lists methanethiol as a colorless, flammable gas with an extremely strong and repulsive smell. At very high concentrations it is highly toxic and affects the central nervous system. Its penetrating odor provides warning at dangerous concentrations. An odor threshold of 0.002 ppm has been reported. The United States OSHA Ceiling Limit is listed as 10 ppm. 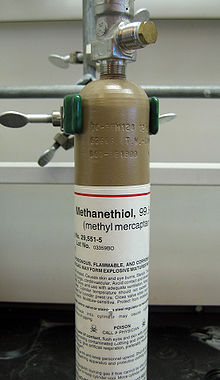 Methanethiol is mainly used to produce methionine, which is used as a dietary component in poultry and animal feed. Methanethiol is also used in the plastics industry and as a precursor in the manufacture of pesticides. It is also released as a decay product of wood in pulp mills. Due to the extremely low odor threshold of thiols in general, they may be added to otherwise odorless gases such as natural gas, enabling people to detect leaks by smell. It is also used by the mining industry, where it is injected into fresh-air intakes of a mine to warn miners of any emergencies that require evacuation.

On December 26, 2005, dozens of people at a St. Petersburg, Russia Maksidom home supplies store became ill when gas suspected to be methanethiol was released.[1] The store had received letters threatening to disrupt business during the Christmas season. Three other stores belonging to the same chain found boxes with glass containers and timers that also might have been rigged to release the gas.

In 2004, an exhausted methanethiol canister used by a natural gas distributor was being returned to a supplier for refilling. The canister sprang a leak while in transit at a road deliveries company in Sesto San Giovanni, a town just north of Milan, Italy. Gas was carried by winds across the eastern half of the city of Milan, causing residents as far as 12 kilometers from the canister to make thousands of calls that overwhelmed emergency services for four hours, and risked hiding actual gas leaks.

On November 12, 2009, an out-of-state natural gas supplier injected too much methanethiol into the local supply lines. The resulting odor alarmed many thousands of customers, who called emergency services to report what they thought were leaks.

Methanethiol is a byproduct produced by the metabolism of asparagus.[2] The ability to produce methanethiol in urine after eating asparagus was once thought to be a genetic trait. However recent research suggests that the peculiar odor is in fact produced by all humans after consuming asparagus, while the ability to detect it (methanethiol being one of many components in "asparagus pee") is in fact the genetic trait.[3] The chemical components responsible for the change in the odor of urine show as soon as 15 minutes after eating asparagus.[4]