Christ's Hospital railway station is near Horsham, West Sussex. It was opened in 1902 by the London, Brighton and South Coast Railway (LBSCR) and was intended primarily to serve Christ's Hospital, a large independent school which had moved to the area in that year. It now also serves the rural area to the west of Horsham. In order to alight from the train here, one must travel in the first seven carriages as the station has a short platform.

Opened originally as "Christ's Hospital West Horsham"[1], the station was until the mid-1960s an important junction with, in addition to the existing link to Arundel via Pulborough, connections to Guildford via Cranleigh and Brighton via Shoreham.

The belief that the school's arrival would generate substantial passenger traffic, and that the growing town of Horsham would expand westwards, led the LBSCR to invest £30,000 into constructing a magnificent station building with a goods yard and facilities. Previously there had been no station at this point, only a small wooden platform which was used by a local dairy to ferry milk to London; this platform had fallen into disuse upon the bankruptcy of the dairy.

The magnificent red brick station, reflecting the LBSCR's aspirations for the area, was constructed using bricks supplied by the nearby Southwater Brickworks. Five through tracks were laid which served seven facing platforms. Three platforms were set aside to the Cranleigh Line and two other platforms served passengers on the Steyning Line and Arun Valley Line - allowing trains travelling from London via Horsham the option of routes to Pulborough, Shoreham or Guildford and beyond. A single loop on the down line serving two facing platforms was installed to deal with the large number of pupils expected (the school had 835 pupils) and the van trains carrying their luggage, as well as holiday specials. The school governors subsidised the costs of construction.[2]

In the event, the LBSCR's expectation of an income from the station to match the size of its premises would be defeated by two developments. Firstly, Christ's Hospital school has only ever accommodated boarders - the LBSCR did not consider this when building the station. Secondly, the anticipated residential development in the area did not materialise. This was not helped by the fact that the school had purchased much of the land around the junction, effectively ending any hopes for housing in the area. The LBSCR was therefore left with a white elephant: the capacity and stature of the station being vastly out of proportion with its status as a useful rural interchange, rather than an important railway junction serving much of West Sussex.[2][3]

Dwindling passenger numbers resulted in the station losing much of its usefulness in the 1960s, when the Steyning Line and Cranleigh Line closed as a consequence of the Beeching Axe. For a time the station itself was under threat of closure, but survived following a public outcry and the presentation of a petition with 3,046 signatures to the Queen. 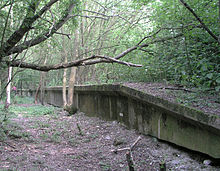 The disused Cranleigh Line platforms in 2006

The station bears little resemblance today to the grand Edwardian structure erected by the LBSCR. In 1972 British Rail reduced it to a size more suited to its existing traffic, demolishing the station building and reducing the number of platforms from seven to two[4]. The platforms used for the Cranleigh Line (nos. 5, 6 and 7) were dismantled and fenced off. The down loop (plats 1 and 2) was filled in and the sidings have disappeared. The only platforms that remain in use are nos. 3 and 4 which are now respectively the downside and upside platforms, served by the double track line between Horsham and Billingshurst. The only original structures remaining are the subway and the platform 2 and 3 waiting room and toilet. The ticket office is now open from the first London bound train (Monday to Friday) which is about 0630, until 10:40 when the office shuts. There is also a 'Quick Ticket' machine allowing passengers to purchase tickets when the office is closed. In April 2009 Southern installed display screens allowing passengers to see when trains are due.

The typical Monday-Saturday off peak service is:

(When returning from London passengers should ensure they are in the rear part of the train.)

In the peak more of the trains stop here although not all of them.

On Sundays there is only 1 tph down the line and all of these stop at Christ's Hospital.