The cuisine of Karnataka includes many vegetarian and non-vegetarian cuisines. The varieties reflect influences from and to the food habits of many regions and communities from the three neighbouring South Indian states, as well as the state of Maharashtra to its north. Some typical dishes include Bisi bele bath, Jolada rotti, Chapati, Ragi rotti, Akki rotti, Saaru, Huli, Vangi Bath, Khara Bath, Kesari Bath, Davanagere Benne Dosa, Ragi mudde, and Uppittu. The famous Masala Dosa traces its origin to Udupi cuisine. Plain and Rave Idli, MysoreMasala Dosa and Maddur Vade are popular in South Karnataka. Coorg district is famous for spicy varieties of pork curries while coastal Karnataka boasts of many tasty seafood specialities. Among sweets, Mysore Pak, Holige, or, Obbattu, Dharwad pedha, Chiroti are well known.

Although the ingredients differ from one region to another, a typical Kannadiga Oota (Kannadiga meal) includes the following dishes in the order specified and is served on a banana leaf: Uppu(salt), Kosambari, Pickle, Palya, Gojju, Raita, Dessert (Yes, it is a tradition to start your meal with a dessert - Paaysa), Thovve, Chitranna, Rice and Ghee

After serving ghee to everyone, one may start the meal. This is done to ensure that everyone seated has been served all the dishes completely.

What follows next is a series of soup like dishes such as Saaru, Muddipalya, Majjige Huli or Kootu which is eaten with hot rice. Gojju or raita is served next; two or three desserts are served; fried dishes such as Aambode or Bonda are served next. The meal ends with a serving of curd rice.

It is believed that every meal is a wholesome meal containing essential components of a healthy meal such as proteins, carbohydrates and vitamins.

There is some diversity in core food habits of North and South Karnataka. While northern-style dishes have jola and rice as the primary cereals the south uses ragi and rice.

The North Karnataka cuisine can be primarily found in the northern districts of Karnataka, including Bidar, Kalburgi, Yadgir, Vijapura, Bagalakote, Belagaavi, Raayachooru, Dharwad, Davangere, Gadag, Haveri, Koppala and western and northern areas of Ballari. The cuisine is also considered a specialty in the cities of Southern Karnataka like Bengaluru and Mysuru, with several restaurants offering this cuisine to meet the growing demand. 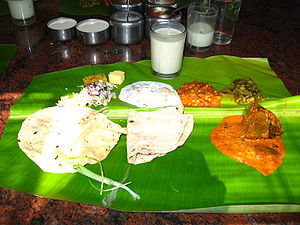 The following is the typical menu of a vegetarian Northern Karnataka meal :

The South Karnataka or old Mysore region also known as Bayaluseeme or the plains including the present-day Kolara, Bengalooru, Mysooru, Tumakooru, Mandya, Haasana, Chamarajanagara. Ragi and Rice are the most important staple grains, Jowar and bajra are also cultivated and consumed in the drier parts of the region. The first meal of the day is the breakfast which is quite substantial. Regular meals consists of Ragi mudde or steamed dumpling made from ragi flour, a curry to roll bits of the dumpling often called Saaru, Rice and Yogurt. Optional accompaniments include a salad called Kosambari, various Palyas (fried, boiled or sauteed spicy vegetables) and assorted pickles.

]-like leaves staples together into big circular discs. First accompaniments are served which includes variety of Palya, Kosambari, sweet-savory gojju, hot spicy chutney Pickles, bajji, bonda, vade, Papads. The first course alternated between sweets and rice preparation. The second course is a set of curries to be consumed with rice. It generally starts with Tovve, a mild lentil dish laced with ghee, Majjige Huli, vegetables simmered in a mild yogurt sauce, followed by Huli, lentils and vegetables spiced and tempered with ghee, mustard, asafoetida and curry leaves. This is followed by tili Saaru which is a thin lentil stock spiced and laced with ghee and curry leaves. The final course of the meal is rice and curd with pickles. Buttermilk is also served to be consumed at the end of the meal.

The Hilly district of Kodagu (Coorg) also has its own unique cuisine which includes spicy meat (Pandi (Pork) Curry, Chicken, Mutton), Kadumbutt(Round balls made up of rice), Paputt, Thaliyaputt. The spicy meat curries derives a tangy taste from Kokum Kachampuli.

Karnataka cuisine-common to all regions

Some common vegetarian dishes prepared on a regular basis are: 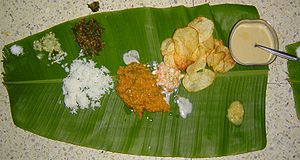 Lunch served on a plantain leaf 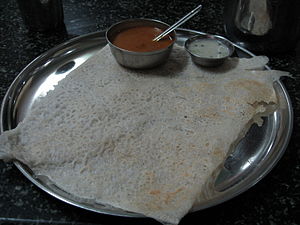 Neer Dose, an authentic dish of Karnataka served with chutney and sambhar

Palya or side dishes 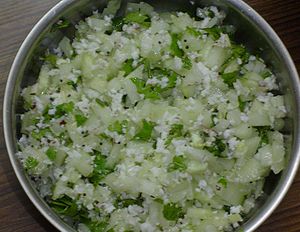 A salad prepared using simple ingredients such as lentils, green chillies and finely chopped coriander. The dish is generally finished with a tempering of mustard seeds and asafotida. Common variants include kosambari made with the above ingredients in addition to grated cucumber or carrot. 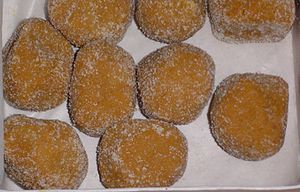 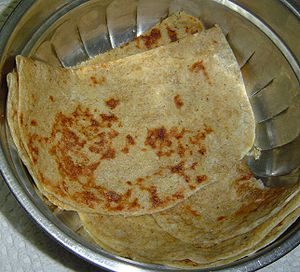 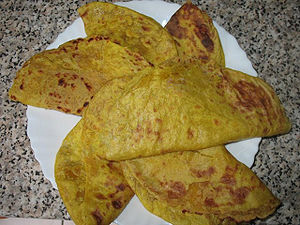 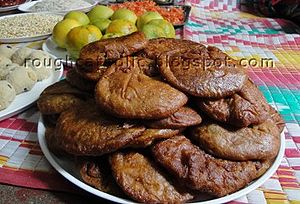 mandige - huge flat leavened pastry. It is quite a treat to watch chefs making large (>36 inches in diameter) pastries with bare hands and baking them on upturned clay pots over fire.

This is an ancient dish mentioned in a few inscriptions as the Sanskritised mandaka. For instance, a Western Chalukya inscription of A.D. 1121 mentions that Govinda-Dandadhipa, a famous general of Vikramaditya VI, is said to have made a provision for offering this dish as naivedya to Brahma, Vishnu and Maheshvara, at Pauthage.[1]

Pickles are usually raw seasoned vegetables and sea food, but there are cooked varieties as well called Bisi Uppinakayi (hot pickle). The seasoning varies from plain salt to spices like green chilli, red chilli powder, black pepper, whole and powdered mustard seeds, coriander seeds, etc. They significantly differ from North Indian pickles or achar in that considerably less oil is usually used in the pickles; salt is the main preservative.

Udupi cuisine takes its name from Udupi, a city on west coast of Karnataka. Udupi cuisine has its origin in Ashta mathas of Udupi founded by Shri Madhvacharya. Its core is a vast range of creative dishes emphasizing local vegetables and fruits.

The Malenadu of Karnataka can be culturally (on basis food culture) can be clearly divided as south malnad comprising Norhtern Somawarpete in Notrth Kodagu, Sakaleshapura, Mudigere, southern part of chickamagaluru taluk and western part of Belur and Alur taluks in Hassan. Central malnad consisting of chickamagalur, Koppa, malnad region of Shivmoga, and western ghat regions of Uttara Kannada. Even though Western ghat regions of Uttara knnada and Belagavi can be considered as Northern malnad the food culture of these regions is unaware to the rest of Malnad, may be due to inadequate communication with the other parts of malnad and Karnataka. Although many refer to the malenadu cuisine as an amalgam of Coorgi and Mangalorean cuisine, it has its own distinct style. And moreover Malenaadigaru(people hailing from Malnad) are considered to be natives to these part of Karnataka when compared with Coorgies( believed to be Greek soldires of Alexandar's era) and Bunts and Shetty's( Coastal, Mangalore, people who are claimed to be migrants, (Aarya's) from Northern India). So rather Malenaadu cuisine has traveled to the kitchens of Kodavas and Bunts would be a sensible line. The word "Malenaadu" means "land of mountain ranges". The cuisine is heavily influenced by the variety of fruits and vegetables available in the rich forests of western ghats. The ingredients like tender bamboo shoots, colocassia leaves, turmeric leaves, raw jackfruit are easily found in the Sahyadri ranges. Steaming is a favored the method of cooking in malenaadu. More often than not there is minimal use of oils in malenaadu cuisine.

Coconut is widely used in the mangalore cuisine. Traditional dishes include

The Navayath cuisine can be primarily found in the coastal districts of Karnataka, mainly in Uttara Kannada and Udupi. Rice, coconut, sea food, eggs, poultry, and mutton are widely used in the Navayath cuisine. Traditional dishes include