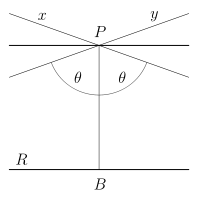 Lines through a given point P and asymptotic to line R. 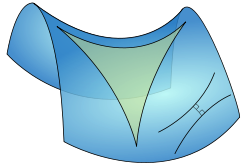 A triangle immersed in a saddle-shape plane (a hyperbolic paraboloid), as well as two diverging ultraparallel lines.

Because there is no precise hyperbolic analogue to Euclidean parallel lines, the hyperbolic use of parallel and related terms varies among writers. In this article, the two limiting lines are called asymptotic and lines sharing a common perpendicular are called ultraparallel; the simple word parallel may apply to both.

A characteristic property of hyperbolic geometry is that the angles of a triangle add to less than a straight angle. In the limit as the vertices go to infinity, there are even ideal hyperbolic triangles in which all three angles are 0°.

An interesting property of hyperbolic geometry follows from the occurrence of more than one line parallel to R through a point P, not on R: there are two classes of non-intersecting lines. Let B be the point on R such that the line PB is perpendicular to R. Consider the line x through P such that x does not intersect R, and the angle θ between PB and x counterclockwise from PB is as small as possible; i.e., any smaller angle will force the line to intersect R. This is called an asymptotic line in hyperbolic geometry. Symmetrically, the line y that forms the same angle θ between PB and itself but clockwise from PB will also be asymptotic. x and y are the only two lines asymptotic to R through P. All other lines through P not intersecting R, with angles greater than θ with PB, are called ultraparallel (or disjointly parallel) to R. Notice that since there are an infinite number of possible angles between θ and 90°, and each one will determine two lines through P and disjointly parallel to R, there exist an infinite number of ultraparallel lines.

Thus we have this modified form of the parallel postulate: In hyperbolic geometry, given any line R, and point P not on R, there are exactly two lines through P which are asymptotic to R, and infinitely many lines through P ultraparallel to R.

In Euclidean geometry, the "angle of parallelism" is a constant; that is, any distance

. As the distance gets shorter, Π(p) approaches 90°, whereas with increasing distance Π(p) approaches 0°. Thus, as distances get smaller, the hyperbolic plane behaves more and more like Euclidean geometry. Indeed, on small scales compared to

, where K is the (constant) Gaussian curvature of the plane, an observer would have a hard time determining whether the environment is Euclidean or hyperbolic.

, analogous to the radius of the sphere in spherical geometry. Using this unit of length a theorem in hyperbolic geometry can be stated which is analogous to the Pythagorean theorem. If a, b are the legs and c is the hypotenuse of a right triangle all measured in this unit then:

For more of these trigonometric relationships see hyperbolic triangles.

As in spherical geometry the only similar triangles are congruent triangles.

In hyperbolic geometry the circumference of a circle of radius r is greater than 2πr. It is in fact equal to

The area of the enclosed disk is

The surface area of a sphere is

The volume of the enclosed ball is

where the full n dimensional solid angle is

for the Gamma function.

The measure of the enclosed n ball is:

In the 18th century, Johann Heinrich Lambert introduced the hyperbolic functions and computed the area of a hyperbolic triangle.

The term "hyperbolic geometry" was introduced by Felix Klein in 1871.[4]

For more history, see article on non-Euclidean geometry, and the references Coxeter and Milnor.

Models of the hyperbolic plane 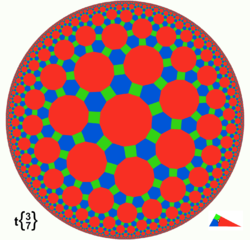 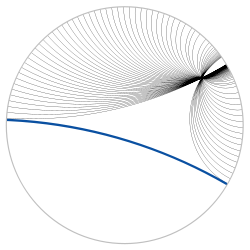 Lines through a given point and asymptotic to a given line, illustrated in the Poincaré disc model

Connection between the models 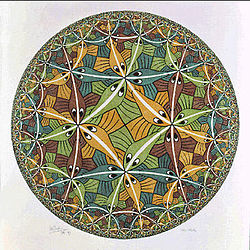 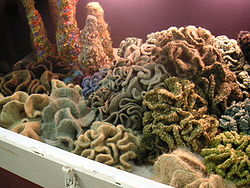 A collection of crocheted hyperbolic planes, in imitation of a coral reef, by the Institute For Figuring 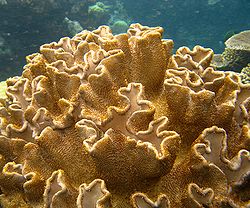 A coral with similar geometry on the Great Barrier Reef

M. C. Escher's famous prints Circle Limit III and Circle Limit IV illustrate the conformal disc model quite well. The white lines in III are not quite geodesics (they are hypercycles), but are quite close to them. It is also possible to see quite plainly the negative curvature of the hyperbolic plane, through its effect on the sum of angles in triangles and squares.

For example, in Circle Limit III every vertex belongs to three triangles and three squares. In the Euclidean plane, their angles would sum to 450°; i.e., a circle and a quarter. From this we see that the sum of angles of a triangle in the hyperbolic plane must be smaller than 180°. Another visible property is exponential growth. In Circle Limit III, for example, one can see that the number of fishes within a distance of n from the center rises exponentially. The fishes have equal hyperbolic area, so the area of a ball of radius n must rise exponentially in n.

There are several ways to physically realize a hyperbolic plane (or approximation thereof). A particularly well-known paper model based on the pseudosphere is due to William Thurston. The art of crochet has been used to demonstrate hyperbolic planes with the first being made by Daina Taimina,[6] whose book Crocheting Adventures with Hyperbolic Planes won the 2009 Bookseller/Diagram Prize for Oddest Title of the Year.[7] In 2000, Keith Henderson demonstrated a quick-to-make paper model dubbed the "hyperbolic soccerball". Instructions on how to make a hyperbolic quilt, designed by Helaman Ferguson,[8] has been made available by Jeff Weeks.[9]

Hyperbolic space of dimension n is a special case of a Riemannian symmetric space of noncompact type, as it is isomorphic to the quotient

The orthogonal group O(1,n) acts by norm-preserving transformations on Minkowski space R1,n, and it acts transitively on the two-sheet hyperboloid of norm 1 vectors. Timelike lines (i.e., those with positive-norm tangents) through the origin pass through antipodal points in the hyperboloid, so the space of such lines yields a model of hyperbolic n-space. The stabilizer of any particular line is isomorphic to the product of the orthogonal groups O(n) and O(1), where O(n) acts on the tangent space of a point in the hyperboloid, and O(1) reflects the line through the origin. Many of the elementary concepts in hyperbolic geometry can be described in linear algebraic terms: geodesic paths are described by intersections with planes through the origin, dihedral angles between hyperplanes can be described by inner products of normal vectors, and hyperbolic reflection groups can be given explicit matrix realizations.

In small dimensions, there are exceptional isomorphisms of Lie groups that yield additional ways to consider symmetries of hyperbolic spaces. For example, in dimension 2, the isomorphisms SO+(1,2) ≅ PSL(2,R) ≅ PSU(1,1) allow one to interpret the upper half plane model as the quotient SL(2,R)/SO(2) and the Poincaré disc model as the quotient SU(1,1)/U(1). In both cases, the symmetry groups act by fractional linear transformations, since both groups are the orientation-preserving stabilizers in PGL(2,C) of the respective subspaces of the Riemann sphere. The Cayley transformation not only takes one model of the hyperbolic plane to the other, but realizes the isomorphism of symmetry groups as conjugation in a larger group. In dimension 3, the fractional linear action of PGL(2,C) on the Riemann sphere is identified with the action on the conformal boundary of hyperbolic 3-space induced by the isomorphism O+(1,3) ≅ PGL(2,C). This allows one to study isometries of hyperbolic 3-space by considering spectral properties of representative complex matrices. For example, parabolic transformations are conjugate to rigid translations in the upper half-space model, and they are exactly those transformations that can be represented by unipotent upper triangular matrices.