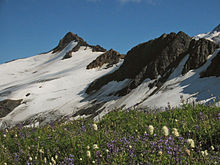 Bistort and lupine bloom on Cougar Divide with Hadley Peak behind.

Mount Baker Wilderness in northern Washington, USA, contains 117,528 acres (475.62 km2). Its eastern border is shared with the boundary of the North Cascades National Park for a distance of 40 miles (65 kilometers). The Wilderness extends from State Route 20 north to the Canadian border. On the west, it is bounded by the foothills of the Puget Sound lowlands. 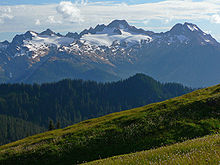 Almost entirely within Whatcom County, the wilderness lies on the western slopes of the Cascade Mountains. The three forks of the Nooksack River and the Baker River are the major drainages of the wilderness.

The terrain is rugged, with steep slopes and numerous ridges dissected by small intermittent or permanent drainages. Mount Baker, an active volcano, is one of the area's most distinctive features. The mountain periodically exhibits thermal activity. The most northern of Washington's volcanoes it stands at 10,778 feet (3,285 m). Other major mountains include:

The Wilderness is wholly contained within Mount Baker-Snoqualmie National Forest and is adjacent to the Mount Baker National Recreation Area.