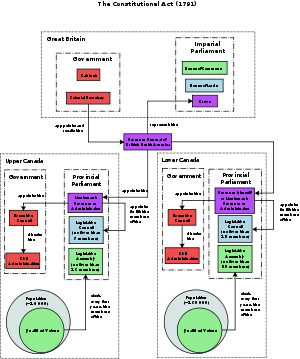 Hierarchy of power under the Constitutional Act of 1791.

The Constitutional Act of 1791, formally The Clergy Endowments (Canada) Act, 1791 (31 Geo. 3. c.31),[1] is an Act of the Parliament of Great Britain. (Long title: An Act to repeal certain Parts of an Act, passed in the fourteenth Year of his Majesty's Reign, intituled, An Act for making more effectual Provision for the Government of the Province of Quebec, in North America; and to make further Provision for the Government of the said Province.)

It reformed the government of the province of Quebec to accommodate the 10,000 English-speaking settlers, known as the United Empire Loyalists, who had arrived from the United States following the American Revolution. Quebec, with a population of 145,000 French speaking inhabitants, was divided in two when the Act took effect on December 26, 1791. The western half became Upper Canada (now southern Ontario) and the eastern half Lower Canada (now southern Quebec). The names Upper and Lower Canada were given according to their location on the St. Lawrence River. Upper Canada received English law and institutions, while Lower Canada retained French law and institutions, including seigneurial land tenure, and the privileges accorded to the Roman Catholic Church. Representative governments were established in both colonies with the creation of a legislative assembly; Quebec had not previously had representative government. Along with each assembly there was also an appointed upper house, the Legislative Council, created for wealthy landowners; within the Legislative Council was the Executive Council, acting as a cabinet for the governor. The Constitutional Act also tried to create an established church by creating clergy reserves, that is, grants of land reserved for the support of the Protestant clergy. 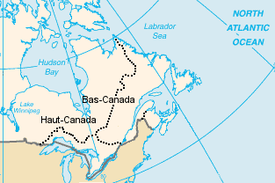 The constitutional act in full.

In practice, income from the rent or sale of these reserves, which constituted one-seventh of the territory of Upper and Lower Canada, went exclusively to the Church of England and, from 1824 on, the Church of Scotland. These reserves created many difficulties in later years, making economic development difficult and creating resentment against the Anglican church, the Family Compact, and the Château Clique. The act was problematic for both English speakers and French speakers; the French Canadians felt they might be overshadowed by English settlement and increased rights for Protestants, while the new English-speaking settlers felt the French Canadians still had too much power. However, both groups preferred the act and the institutions it created to the Quebec Act which it replaced. The act is often seen as a watershed in the development of French Canadian nationalism as it provided for a province (Lower Canada) that was seen by les Canadiens to be their own, separate from the Anglo Upper Canada. The disconnect between this French Canadian ideal of Lower Canada as a distinct, national homeland and the reality of the continued Anglo political and economic dominance of the province after 1791 led to discontent and a desire for reform among various segments of the Canadien populace. The French Canadian frustration at the nature of Lower Canadian political and economic life in "their" province eventually helped fuel the Lower Canada Rebellion of 1837-38.