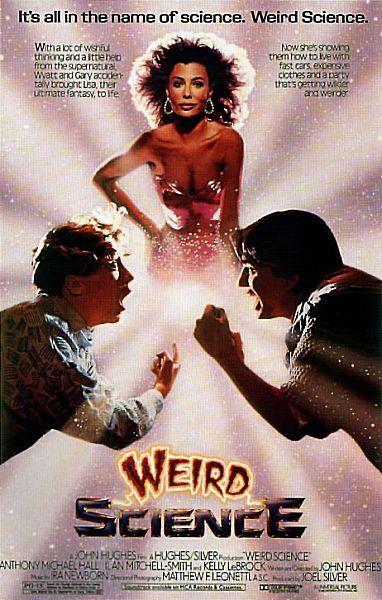 "Weird Science" (1985) is a 1980s written and directed by John Hughes and starring , and . The film's producer Joel Silver acquired film rights to the pre- 1950s magazine "Weird Science", from which the plot is developed as an expansion and modernization of the basic premise in Al Feldstein's story "Made of the Future" in the fifth issue. The title was written and performed by the American New Wave band .

Two s, Gary Wallace () and Wyatt Donnelly (), unpopular and unable to meet girls on their own, use Wyatt's computer to design the perfect woman. They feed various data (images mostly) into the computer. Lacking sufficient processing power, they hack into a US Government mainframe and use its power to create a computer simulation of "the perfect woman" in order to place her in "real life sexual situations" and see how she reacts. A bizarre electrical storm (à la "", their inspiration) follows, and they find themselves unable to shut the computer off.

Mysteriously, the result is "Lisa" (), a real-life woman (who emerges from a red fog in the bathroom). She is a sexed-up but kind-hearted "80's babe" with Einstein's IQ, 's attitude and inexplicable powers. Self-aware from the moment of her creation, Lisa sets about revealing their inner coolness, transforming Gary and Wyatt from nerds into men through a series of wacky and bizarre adventures. Using her magic powers, she takes them to a Blues Club, confronts Wyatt's domineering older brother Chet (), and throws a giant party at Wyatt's upscale home. In the end, the boys get no sex from their mentor, but are seemingly on the path to a relationship with two cute girls their own age.

The movie ends with a group of high school boys in gym class, talking and joking around as two somewhat nerdy boys, similar to how Gary and Wyatt were at the beginning are given the spotlight. Their gym instructor appears and turns out to be none other than Lisa herself. As the boys look on in stunned silence, the two aforementioned ones in particular, Lisa orders them to "drop and give me twenty". The boys all slap themselves on the head and collapse unconscious to the floor. Lisa smiles at the camera and winks.

* as Gary Wallace
* as Wyatt Donnelly
* as Lisa
* as Chet Donnelly
* as Deb
* as Hilly
* as Ian
* as Max
* Vernon Wells as Lord General
* as Al Wallace, Gary's dad
* as Lucy Wallace, Gary's mom
* as Henry Donnelly, Wyatt and Chet's grandfather
* as Carmen Donnelly, Wyatt and Chet's grandmother
* as Mutant Biker
* as Gymnast
* as Gymnast/Texas Syndicate Leader

* Anthony Michael Hall makes a reference to a girlfriend from Canada. His character "Brian" from "" (1985) also makes a reference to a fictional girlfriend from Canada.
* The Time Magazine from which Gary and Wyatt accidentally create a nuclear missile is the January 31, 1983 issue. [ [http://www.time.com/time/covers/0,16641,1101830131,00.html TIME Magazine Cover: Pershing II Missile - Jan. 31, 1983 - Missiles - Nuclear Weapons - Cold War - Weapons - Military ] ]
* Shermer, the fictional town in which many of John Hughes' movies are set, is derived from the name of a village (Shermerville) outside Chicago, Illinois. Northbrook, an affluent suburb, is the community used to represent Shermer in Hughes' films. Shermer Road can be found there.
* During the computer scene, when the two are gaining access to a better computer, a reference to "" is made; the show's intro is shown as computer generated images.
* Chet references The Terminator with the line "I'll be back." while searching for Wyatt. Bill Paxton appeared in the Terminator as well as starring in Aliens with Michael Biehn who starred in The Terminator.

The movie is rated at 53% on the movie review website . Despite mixed reviews, the film has become a cult classic and is one of the most well-known films of the John Hughes high school in the 80s genre.

A television show based on the film debuted in 1994 and ran for 88 episodes. Following the same basic plot as the movie it starred as Lisa, as Wyatt, as Gary, and as Chet.

5 "TESLA GIRLS"Performed by Orchestral Manoeuvres in the Dark (as OMD)Courtesy of Virgin Records, Ltd. / A&M Records

12 "WHY DON'T PRETTY GIRLS LOOK AT ME"Performed by Wild Man From WongaCourtesy of MCA Records, Inc.