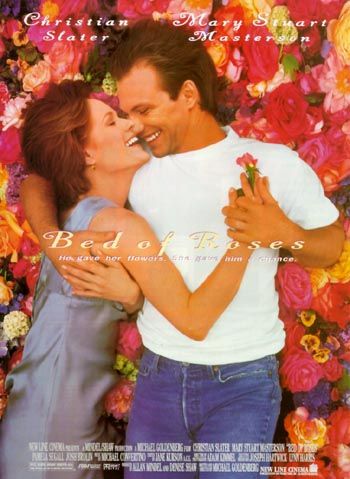 "Bed of Roses" is a that starred and . It was written and directed by .

Two lonely people learn to say it with flowers in this romantic drama. Lisa (Mary Stuart Masterson) is a business executive who has gotten used to being alone but doesn't like it very much. She was abandoned by her birth parents, and then spent most of her childhood being raised by Stanley (S.A. Griffin), a foster father who never really loves Lisa, after her adopted mother died. One day, Lisa gets word that Stanley has died; alone in her apartment, she breaks down and cries uncontrollably. Later the same day, Lisa gets an unexpected delivery of flowers from a secret admirer. Puzzled, Lisa presses the delivery man for information on who might have sent her the flowers, and he confesses -- he sent them himself. Lewis (Christian Slater) runs a flower shop and often takes long walks through the neighborhood, trying to lose his memories of his deceased wife and child. He saw Lisa crying in her window and hoped the roses would cheer her up. Before long, Lisa and Lewis begin dating, but both have some emotional issues to resolve before their story can have a happy ending. This film offers that you can find love.