Carbon tetrachloride, also known by many other names (the most notable being carbon tet in the cleaning industry, and a Halon or Freon in HVAC; see Table for others) is the organic compound with the formula CCl4. It was formerly widely used in fire extinguishers, as a precursor to refrigerants, and as a cleaning agent. It is a colourless liquid with a "sweet" smell that can be detected at low levels.

Both carbon tetrachloride and tetrachloromethane are acceptable names under IUPAC nomenclature.

Carbon tetrachloride was originally synthesised by the French chemist Henri Victor Regnault in 1839 by the reaction of chloroform with chlorine,[2] but now it is mainly produced from methane:

The production often utilizes by-products of other chlorination reactions, such as from the syntheses of dichloromethane and chloroform. Higher chlorocarbons are also subjected to "chlorinolysis:"

Prior to the 1950s, carbon tetrachloride was manufactured by the chlorination of carbon disulfide at 105 to 130 °C:[1]

In the carbon tetrachloride molecule, four chlorine atoms are positioned symmetrically as corners in a tetrahedral configuration joined to a central carbon atom by single covalent bonds. Because of this symmetrical geometry, CCl4 is non-polar. Methane gas has the same structure, making carbon tetrachloride a halomethane. As a solvent, it is well suited to dissolving other non-polar compounds, fats, and oils. It can also dissolve iodine. It is somewhat volatile, giving off vapors with a smell characteristic of other chlorinated solvents, somewhat similar to the tetrachloroethylene smell reminiscent of dry cleaners' shops. 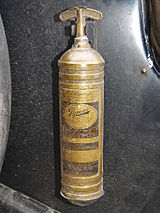 In the 20th century, carbon tetrachloride was widely used as a dry cleaning solvent, as a refrigerant, and in lava lamps.[5]

In 1910, The Pyrene Manufacturing Company of Delaware filed a patent for a using carbon tetrachloride to extinguish fires.[6] The liquid vaporized and extinguished the flames by inhibiting the chemical chain reaction of the combustion process (it was an early 20th-century presupposition that the fire suppression ability of carbon tetrachloride relied on oxygen removal.) In 1911, they patented a small, portable extinguisher that used the chemical.[7] This consisted of a brass bottle with an integrated handpump that was used to expel a jet of liquid toward the fire. As the container was unpressurized, it could be easily refilled after use.[8] Carbon tetrachloride was suitable for liquid and electrical fires and the extinguisers were often fitted to motor vehicles.

One specialty use of carbon tetrachloride was in Stamp collecting, to reveal Watermarks on postage stamps without damaging them. A small amount of the liquid was placed on the back of a stamp, sitting in a black glass or obsidian tray. The letters or design of the watermark could then be clearly seen.

However, once it became apparent that carbon tetrachloride exposure had severe adverse health effects, safer alternatives such as tetrachloroethylene were found for these applications, and its use in these roles declined from about 1940 onward. The fact that high temperatures cause it to react to produce phosgene made it especially hazardous when used against fires. This reaction also caused a rapid depletion of oxygen. Carbon tetrachloride persisted as a pesticide to kill insects in stored grain, but, in 1970, it was banned in consumer products in the United States.

Carbon tetrachloride is one of the most potent hepatotoxins (toxic to the liver), and is widely used in scientific research to evaluate hepatoprotective agents.[9][10]

Carbon tetrachloride has practically no flammability at lower temperatures. Under high temperatures in air, it forms poisonous phosgene.

Because it has no C-H bonds, carbon tetrachloride does not easily undergo free-radical reactions. Hence, it is a useful solvent for halogenations either by the elemental halogen or by a halogenation reagent such as N-bromosuccinimide (these conditions are known as Wohl-Ziegler Bromination).

In organic chemistry, carbon tetrachloride serves as a source of chlorine in the Appel reaction.

It is used as a solvent in synthetic chemistry research, but, because of its adverse health effects, it is no longer commonly used, and in general chemists try to replace it with other solvents.[9] It is sometimes useful as a solvent for infrared spectroscopy, because there are no significant absorption bands > 1600 cm−1. Because carbon tetrachloride does not have any hydrogen atoms, it was historically used in proton NMR spectroscopy. However, carbon tetrachloride is toxic, and its dissolving power is low.[11] Its use has been largely superseded by deuterated solvents. Use of carbon tetrachloride in determination of oil has been replaced by various other solvents, such as tetrachloroethylene.[9] 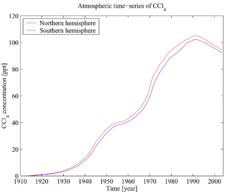 Exposure to high concentrations of carbon tetrachloride (including vapor) can affect the central nervous system, degenerate the liver[10] and kidneys[12] and may result (after prolonged exposure) in coma and even death.[13] Chronic exposure to carbon tetrachloride can cause liver[14][15] and kidney damage and could result in cancer.[16] More information can be found in Material safety data sheets.[17]

In 2008, a study of common cleaning products found the presence of carbon tetrachloride in "very high concentrations" (up to 101 mg m−3) as a result of manufacturers' mixing of surfactants or soap with sodium hypochlorite (bleach).[18]

Like many other volatile substances, carbon tetrachloride is prone to misuse by inhalation, due to its possible depressant and/or dissociative effect upon the central nervous system. Use of carbon tetrachloride in this manner presents serious health risks, and may result in toxic effects described above.

Carbon tetrachloride is also both ozone-depleting[19] and a greenhouse gas.[20] However, since 1992[21] its atmospheric concentrations have been in decline for the reasons described above (see also the atmospheric time-series figure). CCl4 has an atmospheric lifetime of 85 years.[22]