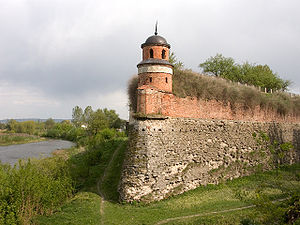 A tower of Dubno Fortress.

Dubno (Ukrainian: Дубно) is a city located on the Ikva River in the Rivne Oblast (province) of western Ukraine. Serving as the administrative center of Dubno Raion (district), the city itself is also designated as a separate raion within the oblast. It was home to the Cold War facility Dubno air base. The current estimated population is around 37,690 (as of 2005).

First mentioned in a chronicle of 1099, when it was in possession of Yaroslav the Wise's grandson David of Brest, Dubno was even a seat of local princes for a short period of time. In the early 14th century it was annexed by Poland with the rest of Halych-Volynia. Later, it became a notable royal stronghold guarding that country's eastern border.

Granted city rights in 1498, the town attracted many foreign settlers, most notably Jewish and Armenian. As such, it became the seat of one of the oldest and most vibrant Jewish communes in Central Europe. Since 14th century owned by the mighty Ostrogski family, who built the Dubno Castle during the times of Vasyl Ostrozhsky. Between 1489 and 1506 the castle was significantly expanded by Konstanty Ostrogski, who made it a modern fortress, one of the strongest in the area.

With the death of Janusz Ostrogski in 1619, the last of his kin, the area was inherited by his brother-in-law Aleksander Zasławski of the cadet branch of the Ostrogski family. About that time it was again modernized to stand up to the standards of renaissance warfare and modernization of artillery. Finally, in 1753 it was sold to the Lubomirskis following the Treaty of Zdołbunów.

In the 1780s the castle underwent yet another modernization and was rebuilt as a residential manor, mostly losing its fortified character. By that time, the town was the largest settlement of the Volhynian Voivodeship and arguably the most notable centre of the area. Annexed by Imperial Russia in 1795 during the Partitions of Poland, the town initially flourished as the szlachta register was moved there from Lwów. However, after the third partition it was moved to Kiev and the town lost its importance, gradually falling into neglect. In 1870 it was declared a Fortified Town, which imposed serious limitations on settlement and housing construction, further limiting the development. However, it remained a notable centre of commerce, most notably because of numerous Czech settlements around the town, that gave it the nickname of the brewery of Volhynia. 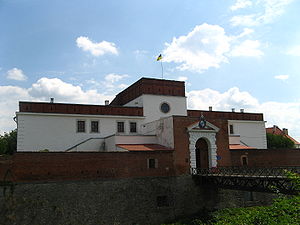 The castle was ruined in 1915 during the World War I. Retaken by Poland in 1918 and finally granted to that state in the Peace of Riga, it was a seat of a powiat and a notable military garrison of the KOP. In 1935 a large prison was started to be built, the third biggest in Poland at that time. Between 1932 and 1939 the castle was being rebuilt in its original form, but the works were stopped by the outbreak of World War II. Occupied by the Soviet Union in the effect of the Molotov-Ribbentrop Pact of 1939, it was subject to harsh policies of the NKVD. The uncompleted prison was taken over by the NKVD in December 1939 and was used for political prisoners of all parts of Soviet-annexed Poland. Between 1500 and 3000 prisoners were being kept there in harsh conditions, with new inmates arriving after the previous ones were successively transported to Gulag and other Soviet prisons. In 1940 most of the local Poles were arrested and resettled to various Soviet Gulags and prisons throughout the USSR. In 1941, following the outbreak of Soviet-German War, on June 24 and June 25, 1941, approximately 550 prisoners of the Dubno prison were executed by the withdrawing NKVD while only 8 of them survived. About that time in the vicinity of the town (and around Lutsk and Brody) a large tank battle was fought. In the Battle of Brody (1941) the German 1st Panzer Group under Ewald von Kleist managed to break the counter-attack by Soviet 9th and 19th Mechanized Corps, and 8th Mechanized Corps. 8 th Corps Tank Group take Dubno and held him 5 days before is turn back by stronger German forces' (under Konstantin Rokossovski, Nikolay Feklenko and D.I Rybjasev, Commander of 8th Corps Tank group was brigade commisar N.K. Popel, respectively).

Soon afterwards the town was occupied by Germany. In 1942 a large ghetto was created there. Most of the local Jews (roughly 12,000, that is 59% of pre-war inhabitants of the town) were killed in The Holocaust. Most were shot at mass executions by the SS Einsatzgruppe outside town. A detailed description of the mass murder was given by Hermann Friedrich Graebe at the Nuremberg trials. A young German officer of the German Infanterieregiment 9, Axel von dem Bussche witnessed the executions and reacted by joining the resistance movement against Hitler. After the war the town was given to Soviet Ukraine.

Town in the government of Volhynia, Russia. According to the census of 1897 it had a population of 13,785, including 5,608 Jews. The chief sources of income for the latter are in trading and industrial occupations. There are 902 artisans, 147 day-laborers, 27 factory and workshop employees, and 6 families cultivate 90 deciatines of land. The town has a Jewish hospital, but no educational institutions except several ḥadarim. The earliest date given in connection with the Jews of Dubno is the beginning of the 17th century. In [1650] there were in Dubno 47 Jewish and 141 Christian taxable households.

Dubno is perhaps best known within the Jewish world as the long-time home of Jacob ben Wolf Kranz, known as the Dubner Maggid.

Dubno is twinned with:

This article incorporates text from the 1901–1906 Jewish Encyclopedia, a publication now in the public domain. ([1])