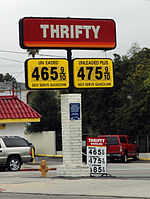 Example of psychological pricing at a gas station

Psychological pricing or price ending is a marketing practice based on the theory that certain prices have a psychological impact. The retail prices are often expressed as "odd prices": a little less than a round number, e.g. $19.99 or £2.98. The theory is this drives demand greater than would be expected if consumers were perfectly rational. Psychological pricing is one cause of price points.

According to a 1997 study published in the Marketing Bulletin, approximately 60% of prices in advertising material ended in the digit 9, 30% ended in the digit 5, 7% ended in the digit 0 and the remaining seven digits combined accounted for only slightly over 3% of prices evaluated.[1] In the UK, before the withdrawal of the halfpenny coin in 1984, prices often ended in 991⁄2. This is still seen today in gasoline (petrol) pricing ending in 9⁄10 of the local currency's smallest denomination; for example in the US the price of a gallon of gasoline almost always ends in US$0.009 (e.g. US$3.289).

In a traditional cash transaction, fractional pricing imposes tangible costs on the vendor (printing fractional prices), the cashier (producing awkward change) and the customer (stowing the change). These factors have become less relevant with the increased use of checks, credit and debit cards and other forms of currency-free exchange; also, the addition of sales tax makes the pre-tax price less relevant to the amount of change (although in Europe the sales tax is generally included in the shelf price).

The psychological pricing theory is based on one or more of the following hypotheses:

The theory of psychological pricing is controversial. Some studies show that buyers, even young children, have a very sophisticated understanding of true cost and relative value and that, to the limits of the accuracy of the test, they behave rationally. Other researchers claim that this ignores the non-rational nature of the phenomenon and that acceptance of the theory requires belief in a subconscious level of thought processes, a belief that economic models tend to deny or ignore. Research using results from modern scanner data is mixed.

Now that many customers are used to odd pricing, some restaurants and high-end retailers such as Nordstrom psychologically-price in even numbers in an attempt to reinforce their brand image of quality and sophistication.

Kaushik Basu used game theory in 1997 to argue that rational consumers value their own time and effort at calculation. Such consumers process the price from left to right and tend to mentally replace the last two digits of the price with an estimate of the mean "cent component" of all goods in the marketplace. In a sufficiently large marketplace, this implies that any individual seller can charge the largest possible "cent component" (99¢) without significantly affecting the average of cent components and without changing customer behavior.[2]

The euro introduction in 2002, with its various exchange rates, distorted existing nominal price patterns while at the same time retaining real prices. A European wide study (el Sehity, Hoelzl and Kirchler, 2005) investigated consumer price digits before and after the euro introduction for price adjustments. The research showed a clear trend towards psychological pricing after the transition. Further, Benford's Law as a benchmark for the investigation of price digits was successfully introduced into the context of pricing. The importance of this benchmark for detecting irregularities in prices was demonstrated and with it a clear trend towards psychological pricing after the nominal shock of the euro introduction.[3]

Another phenomenon noted by economists is that a price point for a product (such as $4.99) remains stable for a long period of time, with companies slowly reducing the quantity of product in the package until consumers begin to notice. At this time the price will increase marginally (to $5.05) and then within an exceptionally short time will increase to the next price point ($5.99, for example).[4]

Research has also found psychological pricing relevant for the study of politics and public policy.[5] For instance, a study of Danish municipal income taxes found evidence of "odd taxation" as tax rates with a nine-ending were found to be over-represented compared to other end-decimals.[6]

Exactly how psychological pricing came into common use is not clear, though it is known the practice arose during the late 19th century. One source speculates it originated in a newspaper pricing competition. Melville E. Stone founded the Chicago Daily News in 1875, intending to price it at one cent to compete with the nickel papers of the day. The story claims that pennies were not common currency at the time, and so Stone colluded with advertisers to set whole dollar prices a cent lower—thus guaranteeing that customers would receive ample pennies in change.[7]

Others have suggested that fractional pricing was first adopted as a control on employee theft. For cash transactions with a round price, there is a chance that a dishonest cashier will pocket the bill rather than record the sale. For cash transactions with an odd price, the cashier must make change for the customer. This generally means opening the cash register which creates a record of the sale in the register and reduces the risk of the cashier stealing from the store owner.[citation needed]

In the former Czechoslovakia, people called this pricing "baťovská cena" ("Baťa's price"), referring to Tomáš Baťa, a Czech manufacturer of footwear. He began to widely use this practice in 1920.[8]

Price ending has also been used by retailers to highlight sale or clearance items for administrative purposes. A retailer might end all regular prices in 95 and all sale price in 50. This makes it easy for a buyer to identify which items are discounted when looking at a report.[citation needed]

In its 2005 United Kingdom general election manifesto, the Official Monster Raving Loony Party proposed the introduction of a 99-pence coin to "save on change".[9]

Wal-Mart, a major retailer, makes use of .98 price endings as opposed to .99 endings.

A recent trend in some monetary systems is to eliminate the smallest denomination coin (typically 0.01 of the local currency). The total cost of purchased items is then rounded up/down to, for example, the nearest 0.05. This may have an effect on future "odd-number" pricing to maximize the rounding advantage for vendors by favoring 98 and 99 endings (rounded up) over 96 and 97 ending (rounded down) especially at small retail outlets where single item purchases are more common. Australia is a good example of this practice where 5 cents has been the smallest denomination coin since 1992, but pricing at .98/.99 on items under several hundred dollars is still almost universally applied (e.g.: $1.99 – $299.99) while goods on sale often price at .94 and its variations.