Conflans-Sainte-Honorine is a commune in the Yvelines department in the Île-de-France region in north-central France. It is located in the north-western suburbs of Paris 24.2 km (15.0 mi) from the center. 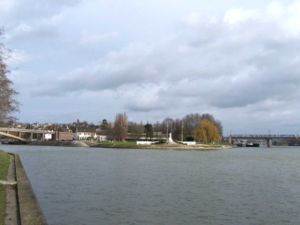 The commune was originally named for its geographic position at the confluence of the Seine and Oise rivers. The village was given the addition "Sainte Honorine" in the 13th century after the female Saint Honorina, whose relics had been stored there since 876.

Partly on account of its strategic position, Conflans-Sainte-Honorine is considered the capital of the French inland waterways, and the right bank of the River Seine is still lined with barges (although these are now used mainly as houseboats). Every year in June, the town celebrates the "Pardon national de la batellerie" in remembrance of its former importance to inland shipping.

It is also served by Conflans – Fin d'Oise station which is an interchange station on Paris RER line A and on the Transilien Paris – Saint-Lazare suburban rail line.