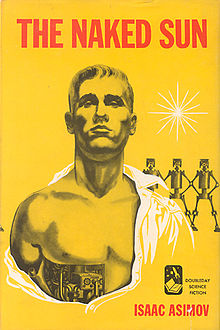 This character appears on the cover of the novel The Naked Sun.

R. Daneel Olivaw is a fictional robot created by Isaac Asimov. The "R" initial in his name stands for "robot," a naming convention in Asimov's future society. Olivaw appears in Asimov's Robot/Foundation Series, most notably in the novels The Caves of Steel, The Naked Sun, The Robots of Dawn, Robots and Empire, Prelude to Foundation, Forward the Foundation, Foundation and Earth. Since he also appears in all of the books of the Second Foundation Trilogy, Daneel is the most commonly appearing Asimov character. He was constructed immediately prior to the age of the Settlers, and lived at least until the formation of Galaxia, thus spanning the entire history of the First Empire.

Olivaw is a Robot built by Roj Nemennuh Sarton and Han Fastolfe, who are Spacer roboticists from the planet Aurora, in the year 5020 AD.[1] Although designed and built by Auroran roboticists, Olivaw was constructed on Earth. He is the first humanoid, or "humaniform," robot ever constructed and is virtually indistinguishable from a human being. This "undercover" attribute enables him to help earth-policeman Elijah Baley solve crimes. Olivaw and Baley first meet while Baley is investigating the murder of his co-creator Sarton in Spacetown. Olivaw is physically a perfect likeness of Dr. Sarton.

Olivaw has a broad, high-cheekboned face and short bronze hair lying flatly backward and without a parting. He wears clothes and, in The Caves of Steel, cannot be told apart from a human unless he is seen in a situation where he refuses to violate the Three Laws of Robotics, and even in this case is indistinguishable from a particularly altruistic person. In this novel, Daneel is also capable of conducting cerebroanalysis on humans as he meets them. Cerebroanalysis is the fictional analog of modern technology such as fMRI allowing empiricial verification of mental states, thus enabling Daneel to "read" the emotional content of a human's thoughts. This ability is somewhat similar to the telepathic abilities possessed by R. Giskard Reventlov, although Daneel lacks Giskard's ability to also influence human emotion and thought. Daneel's cerebroanalysis capabilities are absent in The Naked Sun, The Robots of Dawn and Robots and Empire. In Robots and Empire, however, Daneel ultimately gains Giskard's telepathic abilities.

Olivaw is introduced in the book The Caves of Steel where he is tasked to assist Elijah Baley in the investigation of the murder of his creator, Roj Nemennuh Sarton. The book shows Earth's prejudice against robots, explaining why a humanoid robot was assigned on the case.

Baley met Olivaw again in The Naked Sun, where he is sent to the Spacer planet Solaria to investigate the murder of Rikainne Delmarre, the husband of Gladia Delmarre. The Solarians are not informed of Olivaw's robotic nature, as an Auroran show of superiority in the creation of robots. It is shown that Olivaw learns from Baley's methods of investigation in both books, which leads to him playing a larger role in the Naked Sun.

Baley and Olivaw's last case together is one on Aurora, in The Robots of Dawn, where the victim of the murder is a humanoid robot, Jander, who is physically an exact likeness of R. Daneel Olivaw. The victim, Jander, was regarded by Gladia Delmarre as her husband due to their publicly unknown sexual relationship.

Baley's and Olivaw's friendship grows with each novel, thus leading to Olivaw being the only robot to ever set foot on a Settler world when Elijah Baley specifically asks to see him on his deathbed. Baley sends Olivaw away immediately before dying, as witnessing his death would harm Olivaw due to the First Law of Robotics. Baley's words to reassure Olivaw about his death, explaining to him that he is a "mere thread in the vast tapestry of humanity" assists Olivaw in developing the Zeroth Law of Robotics.

In Robots and Empire, where Asimov finally links the Robot Series with the Empire Series, Giskard and Olivaw often discuss the limitations of the Laws of Robotics, a process lengthened by the fact that their positronic pathways prevent thought along these lines, thus often leading to a temporary loss in the ability to talk or move. By the end of the book, when Daneel has formulated the Zeroth Law of Robotics ("A robot may not harm humanity, or through inaction, allow humanity to come to harm"), Giskard is the first robot to act according to this new law. However, the act of causing harm to a human being in violation of the First Law proves destructive for Giskard, due to the uncertainty of whether or not his actions benefit humanity in the long run. Before deactivating completely, Giskard transfers his powers of being able to read and influence minds to Olivaw, whose closer tie to humanity allows him to slowly adapt to the new law without any risk of destruction.

Together Daneel and Giskard imagine the science of "psychohistory" or laws of humanics, that would enable them to execute the "Zeroth Law" in a quantitative sense. Thousands of years later this would be developed into practical application by Hari Seldon.

For that time onward, Olivaw manipulates the galaxy with the help of his many robot allies. Hari Seldon's wife Dors Venabili is the only one of Olivaw's humanoid robot allies to be shown in the books. He sets up both the Galactic Empire and Gaia in order to create a society that does not need robots. Under the guise of Eto Demerzel, he becomes the first minister to galactic Emperor Cleon I and Stannell VI.

When Hari Seldon first comes to Trantor, Olivaw, under the guise of reporter Chetter Hummin (a play on the words "cheater" and "human"), convinces Hari that the Galactic Empire is dying and that psychohistory must be developed into a practical science in order to save it. As Hummin, he convinces Seldon that Cleon's first minister Eto Demerzel is pursuing him and that it is imperative for Hari to escape and to try making psychohistory practical. He introduces Hari to Dors Venabili, who becomes Hari's friend, protector, and future wife. At the end of Seldon's "Flight" it is revealed that Hummin and Demerzel are actually the same person, and are both false identities of Olivaw. Demerzel appears again briefly in the epilogue to Forward the Foundation, which says he was one of the many in attendance at Hari Seldon's funeral.

Olivaw appears once more in Foundation and Earth, where Golan Trevize and Janov Pelorat from the Foundation eventually find the radioactive Earth, and Daneel's base on the Moon, and learn about his paternalistic manipulations, including the settlement of Alpha Centauri, the creation of Gaia, and psychohistory.

Based on an independent timeline, Olivaw was 19,230 years old during the events of Foundation and Earth. Olivaw is the longest-living Asimov character, as well as the longest living humanoid robot in that universe (being the 1st humanoid robot created). He is theoretically immortal, because he is a robot. However, his parts need replacing, including his brain, and he eventually has to use a biological brain, as his own becomes more complex each time he replaces it. Daneel mentions that the more complex his brains become, the more fragile they are. At the end of the book, he intends on fusing his brain with that of a Solarian, as it has reached the point where an upgrade is no longer possible. Daneel's original brain had lasted 10,000 years, approximately half his lifetime. In contrast, his final brain, which was thousands of times more advanced than his first, showed signs of shutting down after only 600 years.

Isaac Asimov said that the reason Olivaw appeared so often in his books was that his readers and publishers begged it of him.

In the 1964 British television adaptation of The Caves of Steel (an episode of the BBC2 series Story Parade), R. Daneel Olivaw was played by John Carson (actor). The script was adapted by Terry Nation.

In the 1969 British television adaptation of The Naked Sun (an episode of the BBC2 series Out of the Unknown), Olivaw was played by David Collings.

In the 1989 BBC Radio 4 adaptation of The Caves of Steel, Olivaw was played by Sam Dastor.