HSV is a television station in Melbourne. It is part of the Seven Network, one of the three main commercial television networks in Australia, and its first and oldest station, having been launched in time for the 1956 Summer Olympic Games in Melbourne.

The station began test transmissions in July 1956, and became the first 7 station in Australia and the first in Melbourne to commenced broadcasting on 4 November,[2] soon after the Commonwealth Government started issuing television licenses. In the opening ceremony, Eric Pearce declared :

"We dedicate this station to the full service of the community. To Australian life - the happy families in the homes - we promise to serve you faithfully and well".

HSV-7 and rival station GTV-9 were formed in time to broadcast the Melbourne Olympics, while Sydney stations TCN-9 and ATN-7 in Sydney relayed the Melbourne coverage. HSV-7 was originally owned by The Herald and Weekly Times Ltd, owners of The Herald and The Sun (now merged as the Herald Sun). These papers gave rise to the call sign HSV (the 'V' stands for Victoria, as is the normal protocol for commercial television call signs to have the third letter indicate the state where the station is licensed, although for publicity purposes HSV was said to stand for Herald Sun Vision) 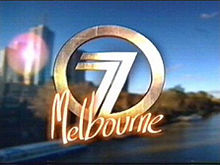 In March 1960, the station converted an old cinema in Fitzroy into the southern hemisphere's first fully remote studio, fully equipped with RCA TRT video tape recorders, cameras and vision mixing equipment, as well as major stage and artist areas and audience seating. It was connected back to the station's main Dorcas Street studios by multiple microwave links. The studios were opened with a major live show featuring Bob Crosby and his band and Jimmy Edwards, amongst others.

The station began to identify as Channel Seven in the late 1960s, and since the early 1970s has used the national Seven Network logos, and has followed the network's on-air presentation and programming. In 1979, Fairfax bought a substantial share of HSV-7 after many failed bids for the entire station[citation needed]. In December 1986 the station was purchased in its entirety by Rupert Murdoch's News Limited. In February 1987 HSV-7 was sold back to Fairfax, along with Brisbane station BTQ-7. As a result of the payback, HSV's unique faces-sports program World of Sport, newsreader Mal Walden and its Hello Melbourne campaign, Australia's contribution to the Hello News campaigns (which by then had spread to Seven's Adelaide and Perth stations, to Tasmania through TasTV and to Queensland through Darling Downs Television 10-4-5a)-were all pulled out. Walden later moved to Ten (ATV-10) as a result of this.

In late 1987, the government introduced cross-media ownership laws which forced Fairfax to choose between its print and broadcast operations. It chose print, and HSV-7 was sold to Christopher Skase's Qintex, which already owned Seven stations in Sydney, Adelaide and Perth[citation needed]. In 1990 Qintex was sent into damage control after Skase escaped extradition proceedings, and the Seven Network became a discreet company. Entrepreneur Kerry Stokes bought the network in 1995. In November 2011, the station celebrated 55 years on air in Melbourne.

Broadcast Centre Melbourne, centre of programming operations for the entire Seven Network and the headquarters for Seven Melbourne.

Seven Melbourne's main production studios, Dorcas Street Studios, is located in South Melbourne. Until March 2002, the studios were home to production for news, current affairs and sport, when they were moved to the new headquarters in the Docklands. Dorcas Street Studios which are now owned by Global Television (Australia) along with Docklands Studios Melbourne are now home to all Melbourne-based entertainment, drama and reality programmes. As part of a joint venture with Seven Melbourne in 2007, the network sold a 50% share of the Dorcas Street site, handing over management to Global Television (Australia). Consequently, a number of shows from other networks, such as Network Ten's Rove, have been produced there, alongside Seven Network shows such as Dancing with the Stars (Australian TV series) and regular game show Deal or No Deal. The Docklands Studios Melbourne are also becoming home to many Melbourne production shows such as Australia's Got Talent, Iron Chef Australia, and the filming of the new Melbourne drama Winners and Losers.

The new facilities, known as Broadcast Centre Melbourne or BCM, are adjoined to the former Seven-owned Etihad Stadium. On 11 March 2002, the first Seven News Melbourne bulletin, fronted by Peter Mitchell, was broadcast from these offices for the first time. It was also the same night in which the nine remaining contestants from the third season of The Mole participated in a special episode of The Weakest Link for a chance to add $100,000 to the prize kitty (they only achieve $14,100, which stands as the lowest amount ever won on the show, however on The Mole this figure is rounded up to $15,000). The offices are used as the transmission control centre for Seven's owned-and-operated stations in Melbourne, Sydney, Brisbane, Adelaide, Perth and regional areas of Queensland. Approximately 200 full-time employees work in the building, with an additional 100 hired as casual or part-time. BCM experienced a major power failure which resulted in a total blackout across the whole Seven Network, as well as all regional affiliates, during the programme Blue Heelers in April 2005.

Seven Melbourne is also the official broadcaster for these major events in Melbourne.

Seven News Melbourne is presented from Broadcast Centre Melbourne by Peter Mitchell on weeknights and Jennifer Keyte at weekends. Weeknight sport and weather are presented by Sandy Roberts and David Brown, with Tim Watson presenting on weekends.

Current weeknight presenter Peter Mitchell held the role of weekend presenter for Seven Nightly News between 1987 and 2000 when he replaced the short-lived presenting duo of David Johnston and Anne Fulwood. Jennifer Keyte was appointed as main weeknight presenter in 1990, becoming Australia's first solo female primetime commercial news presenter.[citation needed] In a network reshuffle in 1996, Keyte terminated her employment after the Seven Network attempted to pair her with David Johnston, who went to present solo for three years.[citation needed] She returned in 2003, assuming the role as weekend presenter, succeeding Jennifer Adams.