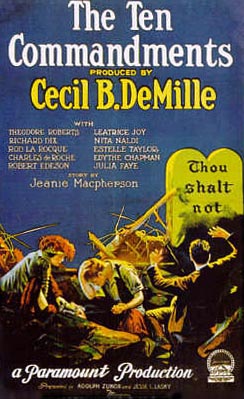 "The Ten Commandments" is a 1923 epic directed by , starring as , as , as Miriam the sister of Moses, and James Neill as Aaron, the brother of Moses. The cast also included notable silent film actors , , , , and . It was a grand spectacle of early Hollywood filmmaking, running 136 minutes, with the Exodus scenes photographed in early . While the first half of the film tells the biblical story, the second half is a morality parable set in modern times. The movie was released by .

A rare telecast of this film showed that the original Technicolor footage had faded and could only be appreciated if the viewer increased the color intensity of the monitor. Film historians have noted that early Technicolor prints deteriorated more rapidly than black and white prints due to the effect of the chemicals on the silver nitrate base of film stock. Preservationists have used digital processes to restore the color in some of the surviving two-strip Technicolor prints, most notably in Universal's 1930 film "".

Despite its epic scale, the Moses story only takes up about the first half of the film. After that, the story changes to a modern setting involving the commandments. Two brothers make opposite decisions, one to follow his mother's teaching of the ten commandments and become a poor carpenter, and the other to break every one of them and rise to the top. The film shows his unchecked immorality to be momentarily gainful, but ultimately disastrous.

A thoughtful contrast is made between the carpenter brother and his mother. The mother reads the story of Moses and emphasizes strict obedience and fear of God. The carpenter, however, reads from the New Testament story of Jesus' healing of lepers. His emphasis is on a loving and forgiving God. The film also shows the mother's strict lawful morality to be flawed in comparison to her son's version.

The Exodus scenes were filmed at , (near ), which is now an archaeological site. The film location was originally chosen because its immense sand dunes provided a superficial resemblance to the Egyptian desert. After the filming was complete, the massive sets — which included four 35-foot tall Pharaoh statues, 21 sphinxes, and gates reaching a height of 110 feet, which were built by a small army of 1,600 workers — were dynamited and buried in the sand. However the burial location at Nipomo Dunes is exposed to relentless northwesterly gales year-round, and much of what was buried is now exposed to the elements, as the covering sand has been blown away. Portions of the modern story were filmed in . The cathedral building sequence was filmed at the then under construction Saints Peter and Paul Church on Filbert Street and the adjoining Washington Square. The parting of the Red Sea scene was shot in . [ [http://kastner.us/seal_beach_history.html Seal Beach History] ]

DeMille directed a second, expanded version of the biblical story in 1956. For the later version, DeMille dropped the modern-day storyline in favor of profiling more of Moses' early life. In 2006, the 1923 film was released on DVD as an extra feature on the 50th Anniversary DVD release of the 1956 film. In a commentary included with the 1923 film, it is stated that DeMille refilmed several sequences nearly shot-for-shot for the new version, and also had set pieces constructed for the later film that were near-duplicates of what he had used in 1923.