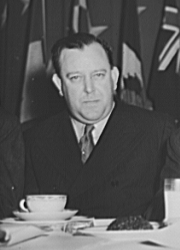 Lie was born in Kristiania on . His father Martin left the family to work as a carpenter in the while his mother Hulda ran a boarding house.fact|date=March 2008 Lie joined the Labour Party in 1911 and was named as the party's national secretary soon after receiving his law degree from the in 1919. He married Hjørdis Jørgensen in 1921; the couple had three daughters, Sissel, Guri, and Mette.

An early admirer of the in , Lie once met and gave permission for to settle in Norway after he was exiled from the . It has been rumored that Lie succumbed to 's wishes to have Trotsky placed under house arrest, though historians can neither confirm nor fully deny this. Lie later ordered Trotsky to leave Norway when Trotsky violated his promise to refrain from political activity.fact|date=March 2008

In 1940, when Norway was invaded by , Lie ordered all Norwegian ships to sail to Allied ports. In 1941 Lie was named as Foreign Minister of the Norwegian government-in-exile, and he remained in this position until 1946.

Lie led the Norwegian delegation to the conference in in 1946 and was a leader in drafting the provisions of the . He was the leader of the Norwegian delegation to the United Nations general assembly in 1946. On , , he was elected as the first Secretary General of the United Nations as a result of a compromise between the major powers, having only missed being elected President of the first General Assembly by a small margin. He gets much of the creditwho|date=March 2008 for securing the current site for the United Nations headquarters from , and establishing the offices there.

As Secretary General, Lie supported the foundations of and . He worked for the withdrawal of Soviet forces in and a ceasefire to fighting in . He attracted the ire of the Soviet Union when he helped gather support for the defense of after it was invaded in 1950 and later worked to end the Soviet boycott of UN meetings, though his involvement has only little to do with the eventual return of the Soviet Union to the UN. He was opposed to 's entry into the United Nations because of his opposition to the Franco government. He also sought to have the recognized by the United Nations after the Nationalist government was exiled to , arguing that the People's Republic was the only government which could fulfill the membership obligations in full.

In 1950, over objections from the Soviet Union, the UN General Assembly voted by 46 votes to 5 to extended Lie's term of office. The vote was a consequence of an impasse in the Security Council in which the US refused to accept any candidate but Lie while the Soviet Union refused to consider Lie due to his involvement in the . The Soviet Union subsequently refused to acknowledge Lie as Secretary General and, having been accused by of hiring "disloyal" Americansndash an allegation which he attributed to the pressing need for civil servants following the establishment of the UNndash Lie resigned on , .

After the United Nations

Lie remained active in Norwegian politics after his resignation from the UN. He was the County Governor of Oslo and Akershus, Chairman of the Board of Energy, Minister of Industry, and Minister of Trade and Shipping. He authored a number of books.

Though he never achieved widespread popularity, he earned a reputation as a pragmatic, determined politician.who|date=March 2008