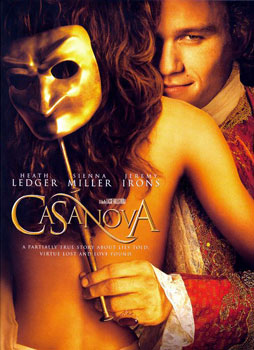 "Casanova" is a 2005 American directed by based on the life of .

The film opens with a young woman tearfully leaving her son to live with his grandmother. She promises to come back for her boy. Several years later, in , in , Casanova, portrayed by , is notorious for his success and with women, his adventures being represented in s around the city. The Doge, the ruler of the city, is sympathetic to Casanova, but cannot be too lenient to avoid trouble with the church. He warns Casanova that he must soon marry or he will be exiled from the city.

Casanova is in love with Francesca (), who writes illegal feminist books under the name of a man, Bernardo Guardi, and argues for women's right as Dr Giordano de Padua. However, her mother () pushes her to marry Paprizzio (), a corpulent rich man from Genoa, whom she has never seen. When Paprizzio arrives in Venice, Casanova lies to him and says that the hotel he booked is closed and he persuades him to stay at his house. Casanova also lies and says that his nom de plume is Bernardo Guardi. While Paprizzio, preparing to visit Francesca, stays at Casanova's house, Casanova visits Francesca, pretending to be Paprizzio.

During the , Casanova confesses his true identity to Francesca, which makes her angry. Casanova is arrested by the for crimes against sexual morality, such as and with a . However, he saves Francesca by pretending to be Bernardo Guardi, which impresses her very much. At his trial, Francesca reveals that it is in fact she who is Bernardo Guardi, and both are sentenced to death. Just as Casanova and Francesca are about to be hanged in the , they are saved by an announcement that the Pope gave amnesty to all prisoners who were to be executed on that day, as it was the Pope's birthday. It is later discovered that the "Cardinal" who gave the announcement was actually an impostor who happens to be Casanova's stepfather, wedded to his long-lost mother who came back for him just as she promised when Casanova was a child. As they all escape on Paprizzio's boat, Francesca's brother, Giovanni (), stays behind to continue Casanova's legendary womanizing ways.

Filming began on July 9 2004, and the finished film was released in the United States on September 3 2005. Visual effects for the film were produced by and . Period costumes were supplied by four different Italian costume houses: , , and , and shoes were manufactured by .

Despite being set in Venice, some scenes were filmed in , particularly the , the theater known for its intricate stage design.