Canadian Forces Base Cold Lake (IATA: YOD, ICAO: CYOD), commonly referred to as CFB Cold Lake, is a Canadian Forces Base located within the City of Cold Lake, Alberta. It is operated as an air force base by the Royal Canadian Air Force and is one of two bases in the country using the CF-18 Hornet fighter/interceptor. Its primary lodger unit is 4 Wing.

Civilian passenger service was available through the Medley passenger terminal on the periphery of the air base. The regularly scheduled air service between Calgary and the civilian terminal was cancelled in June 2011.[3] Unscheduled civilian air traffic is usually directed to the Cold Lake Regional Airport.

The facility is named Cold Lake/Group Captain R.W. McNair Airport. It is one of only three military aerodromes in Canada to be named after an individual, Valcartier (W/C J.H.L. (Joe) Lecomte) Heliport and Moose Jaw/Air Vice Marshal C.M. McEwen Airport being the others.

The airport is classified as an airport of entry by NAV CANADA and is staffed by the Canada Border Services Agency. The use of the airport by international flights is currently restricted to military aircraft and personnel only.[1]

Construction of what would become known as RCAF Station Cold Lake began in 1952 at the height of the Cold War after the site in Alberta's "Lakeland District" was chosen by the Royal Canadian Air Force for the country's premier air weapons training base. The chosen location was near the former Town of Grand Centre (now part of the City of Cold Lake), and was based on factors such as low population density, accessibility, weather, suitable terrain, and available land for air weapons training.

Personnel arrived at Cold Lake on March 31, 1954 with operations at RCAF Station Cold Lake beginning that day. The following year, the federal government signed an agreement with the provinces of Saskatchewan and Alberta for use of a tract of land measuring 180 km by 65 km covering an area of 11,700 square kilometres. This became known as the Cold Lake Air Weapons Range (CLAWR) and is the raison d'être for the location of the base.

Operations in the 1950s and early 1960s centered around training crews destined for the CF100 Canuck all weather interceptor which was in operational use in both Canada and Europe. From 1962, the arrival of the CF104 Starfighter resulted in a change of task, to the training pilots for Canada's NATO commitment in West Germany, which continued up until the arrival of the CF18 Hornet in 1982. From then until today, the base is the training focal point for this aircraft, in addition to operational squadrons being located here.

On February 1, 1968 the RCAF merged with the Royal Canadian Navy and Canadian Army to form the unified Canadian Forces. RCAF Station Cold Lake saw its name changed to CFB Cold Lake and became the responsibility of Air Defence Command. ADC and several other CF commands transformed in 1975 to become Air Command (AIRCOM).

During the 1980s, CFB Cold Lake was thrust into the international media spotlight when CLAWR was used as the target for testing of the newly-developed AGM-86 air launched cruise missiles by the USAF. These missiles were launched from strategic bombers over the Beaufort Sea and travelled down the Mackenzie River valley, closely following the terrain at elevations of several metres above ground level. The tests caused significant controversy among peace activists and local First Nations on the projected flight paths since the new untested weapons were considered a destabilizing force in the international arms race, potentially contributing to instability worldwide. The Federal Court of Canada ruled in favour of allowing the tests to proceed in 1983 and the Canada–United States Test and Evaluation Program or CANUSTEP agreement was subsequently signed between both nations, allowing for the cruise missile tests to use Canadian airspace in the Northwest Territories and Alberta en route to CLAWR.

In 2007 it was the setting for Jetstream, a TV series depicting eight pilots training under the 410 Tactical Fighter Training Squadron to fly a CF-18. 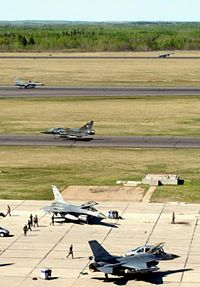 Cold Lake, with the ramp, taxiway A, runway 31R/13L and runway 31L/13R from front to back. The concrete object is the footing for the old ATC tower.

Today, CFB Cold Lake has the following units stationed at the facility:

In addition to its value as a training base, CFB Cold Lake's fighter/interceptor aircraft defend the western half of Canadian air space and together with aircraft from CFB Bagotville cover Canada's Arctic territory. They are operationally controlled by NORAD from CFB North Bay and Cheyenne Mountain Operations Centre in Colorado Springs. Cold Lake aircraft forward deploy to airfields throughout western and Arctic Canada as operational requirements dictate.

Cold Lake Cadet Summer Training Centre (CLCSTC) is located at 4 Wing Cold Lake, held annually from June to August. The primary goal at CLCSTC is the provision of a safe and challenging national summer training program. The Senior Leaders Course (SLC) moved to CFB Cold Lake in 1973.[6] From 1973 to 1987, SLC was the only course offered at Cold Lake until the Survival School (which hosts two courses: Survival Instructor and Introduction to Survival) relocated in 1988. At that time the two schools existed separately with two separate Commanding Officers. By 1989, the two united under one Commanding Officer and became Cold Lake Cadet Camp (CLCC).[6] In 1993, the camp added a third school, the Cadet Service Band, which ran for one year as both a Band and SLC but has now become solely a band program. It is these three schools that make up CLCSTC.[6] The entire Cold Lake Cadet Summer Training Centre has a staff of approximately 205 staff cadets, officers, civilian instructors, regular force, and civilian contract personnel, from all elements of the Cadet Program and from all regions of Canada.[6] The summer 2010 introduced an entirely new school to CLCSTC: The Fitness School which also implemented the first Basic Fitness and Sports Course to CLCSTC. The Basic Fitness and Sports is a three week course that encourages physical fitness and teaches cadets to be Fitness and Sports Advisors in their home Squadrons/Units/Corps. After the summer of 2010, the single, national, Senior Leaders Course will be discontinued in favour of the Leadership and Ceremonial Instructors Course to be offered in each region. The summer of 2011 introduced a new 6 week seniors course to the Fitness School; Fitness and Sports Instructor Course (FSIC). The new FSIC teaches cadets to be Fitness and Sports Instructors within their home Squadrons/Units/Corps.