A DNA-binding domain (DBD) is an independently folded protein domain that contains at least one motif that recognizes double- or single-stranded DNA. A DBD can recognize a specific DNA sequence (a recognition sequence) or have a general affinity to DNA.[1] Some DNA-binding domains may also include nucleic acids in their folded structure. 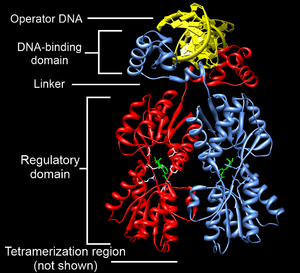 DNA-binding domains with functions involving DNA structure have biological roles in the replication, repair, storage, and modification of DNA, such as methylation.

Many proteins involved in the regulation of gene expression contain DNA-binding domains. For example, proteins that regulate transcription by binding DNA are called transcription factors. The final output of most cellular signaling cascades is gene regulation.

Many DNA-binding domains must recognize specific DNA sequences, such as DBDs of transcription factors that activate specific genes, or those of enzymes that modify DNA at specific sites, like restriction enzymes and telomerase. The hydrogen bonding pattern in the DNA major groove is less degenerate than that of the DNA minor groove, providing a more attractive site for sequence-specific DNA recognition.

Originally discovered in bacteria, the helix-turn-helix motif is commonly found in repressor proteins and is about 20 amino acids long. In eukaryotes, the homeodomain comprises 2 helices, one of which recognizes the DNA (aka recognition helix). They are common in proteins that regulate developmental processes (PROSITE HTH). 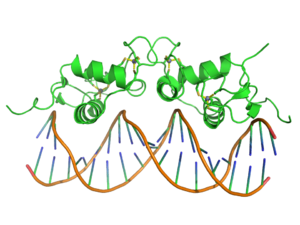 Crystallographic structure (PDB 1R4O) of a dimer of the zinc finger containing DBD of the glucocorticoid receptor (top) bound to DNA (bottom). Zinc atoms are represented by grey spheres and the coordinating cysteine sidechains are depicted as sticks.

The zinc finger This domain is generally between 23 and 28 amino acids long and is stabilized by coordinating Zinc ions with regularly spaced zinc-coordinating residues (either histidines or cysteines). The most common class of zinc finger (Cys2His2) coordinates a single zinc ion and consists of a recognition helix and a 2-strand beta-sheet.[3] In transcription factors these domains are often found in arrays (usually separated by short linker sequences) and adjacent fingers are spaced at 3 basepair intervals when bound to DNA.

The basic leucine zipper (bZIP) domain contains an alpha helix with a leucine at every 7th amino acid. If two such helices find one another, the leucines can interact as the teeth in a zipper, allowing dimerization of two proteins. When binding to the DNA, basic amino acid residues bind to the sugar-phosphate backbone while the helices sit in the major grooves. It regulates gene expression.

Consisting of about 110 amino acids, the winged helix (WH) domain has four helices and a two-strand beta-sheet.

The winged helix turn helix domain (wHTH) SCOP 46785 is typically 85-90 amino acids long. It is formed by a 3-helical bundle and a 4-strand beta-sheet (wing).

The Helix-loop-helix domain is found in some transcription factors and is characterized by two α helices connected by a loop. One helix is typically smaller and due to the flexibility of the loop, allows dimerization by folding and packing against another helix. The larger helix typically contains the DNA-binding regions.

HMG-box domains are found in high mobility group proteins which are involved in a variety of DNA-dependent processes like replication and transcription. The domain consists of three alpha helices separated by loops.

The immunoglobulin domain (IPR013783) consists of a beta-sheet structure with large connecting loops, which serve to recognize either DNA major grooves or antigens. Usually found in immunoglobulin proteins, they are also present in Stat proteins of the cytokine pathway. This is likely because the cytokine pathway evolved relatively recently and has made use of systems that were already functional, rather than creating its own.

The B3 DBD (IPR003340, SCOP 117343) is found exclusively in transcription factors from higher plants and restriction endonucleases EcoRII and BfiI and typically consists of 100-120 residues. It includes seven beta sheets and two alpha helices, which form a DNA-binding pseudobarrel protein fold.

TAL effectors are found in bacterial plant pathogens and are involved in regulating the genes of the host plant in order to facilitate bacterial virulence, proliferation, and dissemination.[4] They contain a central region of tandem 33-35 residue repeats and each repeat region encodes a single DNA base in the TALE's binding site.[5] [6]