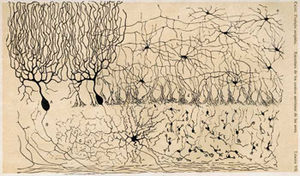 The neuron doctrine is a descriptive term for the fundamental concept that the nervous system is made up of discrete individual cells, a discovery due to decisive neuro-anatomical work of Santiago Ramon y Cajal and later presented, among others, by H. Waldeyer-Hartz.[1] The term neuron (also spelt neurone in English) was itself coined by Waldeyer as a way of identifying the cells in question. The neuron doctrine, as it became known, served to position neurons as special cases under the broader cell theory evolved some decades earlier. He appropriated the concept not from his own research but from the disparate observation of the histological work of Albert von Kölliker, Camillo Golgi, Franz Nissl, Santiago Ramón y Cajal, Auguste Forel and others.[2]

Theodor Schwann proposed in 1839 that the tissues of all organisms are composed of cells[citation needed]. Schwann was expanding on the proposal of his good friend Matthias Jakob Schleiden the previous year that all plant tissues were composed of cells. The nervous system stood as an exception. Although nerve cells had been described in tissue by numerous investigators including Jan Purkinje, Gabriel Valentin, and Robert Remak, the relationship between the nerve cells and other features such as dendrites and axons was not clear. The connections between the large cell bodies and smaller features could not be observed, and it was possible that "neurofibrils" would stand as an exception to cell theory as non-cellular components of living tissue. Technical limitations of microscopy and tissue preparation were largely responsible. Chromatic aberration, spherical aberration and the dependence on natural light all played a role in limiting microscope performance in the early 19th century. Tissue was typically lightly mashed in water and pressed between a glass slide and cover slip. There was also a limited number of dyes and fixatives available prior to the middle of the 19th century.

Elements of the Neuron Doctrine

Neuron Theory is an example of consilience where low level theories are absorbed into higher level theories that explain the base data as part of higher order structure. As a result the neuron doctrine has multiple elements, each of which were the subject of low level theories, debate, and primary data collection. Some of these elements are imposed by the necessity of cell theory that Waldeyer was trying to use to explain the direct observations, and other elements try to explain observations so that they are compatible with cell theory.

Neural units The brain is made up of individual units that contain specialized features such as dendrites, a cell body, and an axon.

Neurons are cells These individual units are cells as understood from other tissues in the body.

Specialization These units may differ in size, shape, and structure according to their location or functional specialization.

Nucleus is Key The nucleus is the trophic center for the cell. If the cell is divided only the portion containing the nucleus will survive.

Contact Nerve cells are connected by sites of contact and not cytoplasmic continuity. Waldeyer himself was neutral on this point, and strictly speaking the neuron doctrine does not depend upon this element. The heart is an example of excitable tissue where the cells connect via cytoplasmic continuity and yet is perfectly consistent with cell theory. This is true of other examples such as connections between horizontal cells of the retina, or the Mauthner cell synapse in goldfish.

Law of Dynamic Polarization Although the axon can conduct in both directions, in tissue there is a preferred direction for transmission from cell to cell.

Later elements that were not included by Waldeyer, but were added in the following decades.

Synapse A barrier to transmission exists at the site of contact between two neurons that may permit transmission.

Unity of Transmission If a contact is made between two cells, then that contact can be either excitatory or inhibitory, but will always be of the same type.

While the neuron doctrine is a central tenet of modern neuroscience, recent studies suggest that there are notable exceptions and important additions to our knowledge about how neurons function.

Electrical synapses are more common in the central nervous system than previously thought. Thus, rather than functioning as individual units, in some parts of the brain large ensembles of neurons may be active simultaneously to process neural information.[3] Electrical synapses are formed by gap junctions that allow molecules to directly pass between neurons, creating a cytoplasm-to-cytoplasm connection.