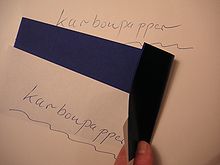 A copy made with carbon paper

Carbon copying, abbreviated cc or c.c., is the technique of using carbon paper to produce one or more copies simultaneously during the creation of paper documents. With the advent of email, the term has also come to refer to simultaneously sending copies of an electronic message to secondary recipients.

A sheet of carbon paper is placed between two sheets of paper and the pressure applied by the writing implement (pen, pencil, typewriter or impact printer) to the top sheet causes pigment from the carbon paper to make a similar mark on the copy. More than one copy can be made by stacking several sheets with carbon paper between each pair. Four or five copies is a practical limit. The top sheet is the original and each of the additional sheets is called a carbon copy.

The use of carbon copies declined with the advent of photocopying and electronic document creation and distribution (word processing). Carbon copies are still used in special applications, for example, in manual receipt books which have a multiple-use sheet of carbon paper supplied, in order that the user can keep an exact copy of each receipt issued, although even here carbonless copy paper is often used to the same effect.

It is still common for a business letter to include, at the end, a list of names preceded by the abbreviation "cc:", indicating that the named persons are to receive copies of the letter, even though carbon paper is no longer used to make the copies. (An alternative etymology is that "c:" was used for copy and "cc:" indicates the plural, just as "p." means page and "pp." means pages.)

The term "carbon copy" can be used in reference to anything that was a near duplicate of an original ("...and you want to turn him into a carbon copy of every fourth-rate conformist in this frightened land!", Heinlein, Stranger in a Strange Land).

Dot matrix and daisy wheel printers are also able to use carbon paper to produce multiple copies of a document in one pass, and most models feature adjustable impact power and head spacing to accommodate up to three copies plus the original printout. Usually, this feature is used in conjunction with continuous, prearranged perforated paper and carbon supplies for use with a tractor feeder, rather than with single sheets of paper, for example, when printing out commercial invoices or receipts.