The Nassoons have performed at a number of prominent venues, including the White House,[2] the US Open, and have also appeared on The Tonight Show with Jay Leno,[citation needed], The Early Show,[3] and Good Morning America.[4] 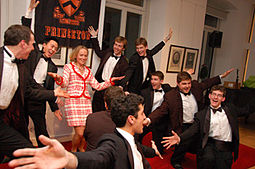 The Nassoons perform at the Holzhausenschlösschen Castle in Frankfurt, Germany during their Intersession Tour in January, 2008.

The Nassoons are an all-male group, and consist of ten to twenty members covering all class years, from freshmen to seniors. Auditions for prospective members are held at the beginning of both fall and spring semesters; however, only freshman and sophomores can join the group. Most musical arrangements are split into five-part harmonies (First Tenor, Second Tenor, Tenor-Baritone, Baritone, Bass), and most feature at least one soloist. The group rehearses four to six nights a week in the basement of 1901 Hall (Room 100), a room that was deeded to them by the University and which they have been singing in since 1949. They perform at University functions, as well as corporate events, dinner parties, country clubs, schools, and other engagements up and down the eastern seaboard during the academic year. They also officially tour three times a year to both domestic and international locales. 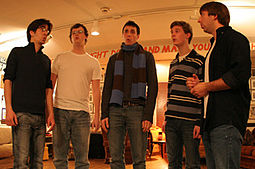 The group had its beginnings as part of the Princeton Glee Club in the late 1930s, rehearsing for small on-campus shows in the basement of Murray-Dodge Hall. The turning point for the yet-unnamed group came on a cool autumn evening in 1941. During the annual Princeton-Yale Glee Club concert on the weekend of the schools' annual football game in 1941, the seven men sang a short set in the middle of the program to a dishearteningly lukewarm reception. In a move of desperation, they decided to unveil an arrangement that the Glee Club director had explicitly asked them not to perform, fearing its bawdy five-part harmonies and scandalous lyrics would offend the sensibilities of the stodgy New Haven audience. But as the final chord rang out, the crowd broke into thunderous applause, and the group sang it again as an encore.[citation needed] That song, Perfidia, remains the alumni song of the Nassoons, and it ends their performances to this very day.

Within the Ivy League a cappella music tradition, the Princeton Nassoons are fourth in age, following The Whiffenpoofs (est. 1909), The Spizzwinks(?) (est. 1914), and The Yale Society of Orpheus and Bacchus (est. 1938), all of Yale University. It is the oldest such group at Princeton and an early performer in an Arch sing setting.[5] 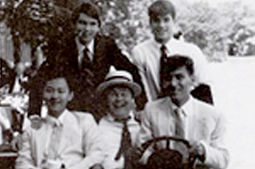 The birth of the Nassoons can be traced back to the late 1930's.

The late 1930s marked the birth of the Nassoons, and the 1940s saw the group's death and rebirth due to World War II. The original eight members came out of the Glee Club to introduce small-group a cappella singing to the Princeton campus. Their founding act initiated what has become, almost seventy years later, a bonafide singing group community and subculture which involves over a hundred undergraduates and innumerable fans.

The Nassoons' popularity was swift in coming. The turning point for the yet-unnamed group came on a cool autumn evening in 1941. During the annual Princeton-Yale Glee Club concert on the weekend of the schools' annual football game, the eight men sang a short set in the middle of the program to a dishearteningly lukewarm reception. In a move of desperation, they decided to unveil an arrangement that the Glee Club director had explicitly asked them not to perform, fearing its bawdy five-part harmonies and scandalous lyrics would offend the sensibilities of the stodgy New Haven audience. But as the final chord rang out, the crowd broke into thunderous applause, and the group sang it again as an encore. That song, Perfidia, remains the alumni song of the Nassoons, and it ends their performances to this very day.

A year after their debut at Yale, the Nassoons were singing in the presence of Ella Fitzgerald, and had performed in prominent venues, like New York's posh Rainbow Room. By the decade's close, the group had lent their voices to the music of such 40's luminaries as Lester Lanin and Gertrude Lawrence. In the early years the Daily Princetonian spent much ink chronicling the group, announcing new members, new officers, and the dates of the group's performances at upcoming social engagements. Though the Nassoons were still affiliated with the Glee Club, and performed when it sang on campus, the group was not held back from performing on their own. Monday through Friday they practiced at 1:00 in Murray-Dodge Hall, getting ready for the growing list of shows that year. By August 1942 they had sung all over the East Coast and the South, at beach clubs, hotels, prep schools, other colleges, and even army camps, not to mention the girl's schools, where they were always warmly received.

A glowing campus news write-up bragged that the group was rapidly replacing the "decadent, timeworn" Whiffenpoofs as the premier east coast singing group. "The Smiffenpoofs," it predicted, referring to the all-girl group at Smith College, "would soon become the 'Lassoons.'" The Nassoons certainly had enough songs in their repertoire to fill an entire program. They held a special spring concert on Friday, May 28, 1943, singing twenty-one songs on the steps of Blair Arch, foreshadowing what would become one of the long-standing traditions of campus life, an "Arch Sing".

In fall 1942 the Nassoons broadened their campus exposure by involving themselves with the Triangle Club. They performed in Time and Again while the sets were being changed behind the curtain, and also occasionally in the background during the bar and night club numbers. Among the songs they performed in the show were "Thank God They're Not Rationing You" and "As I Remember You."

But the celebrated life of the Nassoons came to an abrupt end in spring 1943, when, like many campus activities, the group disbanded because of World War II. Among their last achievements before disbanding was the release of their 1942 album of songs and their recording session with Gertrude Lawrence, a famed Broadway actress of the time, which was rebroadcast over the Armed Forces Network in 1943. As a symbol of their unity, the group wrote up a constitution, stating that the name "Nassoons" could not be used by any singing group on campus unless at least four of the old Nassoons came back to audition new members for the group.

In spring 1946, on the weekend of May 18, Nassoon alumni returned to campus, held auditions for new members, and revived the group after its three-year hiatus. During its first two years, the Nassoons were still connected to the Glee Club; but in September 1946, the Committee on Non-Athletic Organizations formally gave a charter to the Nassoons as an independent organization. The group, thereafter a "legal entity," was officially reborn. Practices were held in the basement of the Presbyterian Church on Nassau Street (not until 1949 did the group start using their permanent home, 100 1901 Hall).

Although also occupied with learning the old Nassoon songs, the postwar group concentrated its energy into the 1946 Triangle show, Clear the Track, the first show Triangle had performed since 1942's Time and Again. The Nassoons made their campus debut with the Glee Club on November 22, at Alexander Hall (tickets were 60 cents), and later that night sang at a dance held by the Daily Princetonian, sharing the stage with Les Brown and his orchestra (1946's "Top Recording Band of the Year").

In January 1947, the group announced their plans for a March 7 recording session to cut their first album in five years. They picked as their recording technician Mary Howard, who had a month earlier had been cited by Time magazine for being at "the top of her profession." The release date was set for April 1947, and the price of the three-disc "limited edition" album was $4.50. Advance orders were recommended. A barometer of the group's popularity was the February 1947 Daily Princetonian, which mentioned the Nassoons in two headlines and a third article, all on the same page. The album even had an eight-paragraph review in the May 1 issue of the Prince.

On November 14, 1947 the Nassoons sang with the Whiffenpoofs for the first time since the prewar disbanding. The two groups appeared together at the Prince-Tiger prom. The venue was the first held in the newly-completed Dillon Gym, and two thousand people were expected to attend. Through the efforts of Jim Buck '46, the two groups played their first touch football game together on the morning of the varsity football game, a tradition which continues annually, to this day.

By 1948 the group was holding weekly informal sings on Sunday afternoon in the Nassau Inn. Outside of performances were hour-and-a-half practice sessions, five times a week, when the group practiced their 35-40 song repertoire and taught the arrangements to new members. Membership for prospective Nassoons was not guaranteed. These "probational" members had to shine during their first year with the group, or else they would not be officially taken into the group, and asked to leave.

The Nassoons began recording their music as early as 1941, with a recording of The Nassoon Signature, and continued to produce LP albums from that point on, typically every two years. The group converted to the compact disc format in 1990. Albums typically contain 20-22 songs that reflect the group's current performance repertoire. All arrangements are Nassoon-specific; most are written by group members and the rest are written explicitly for the group. 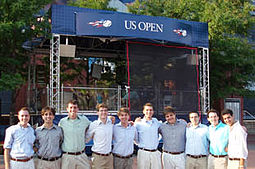 The Nassoons perform at the 2007 US Open in New York City. 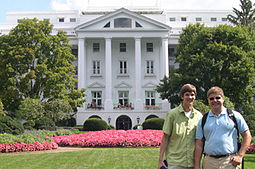 The Nassoons perform at the Greenbrier Resort in West Virginia every Labor Day Weekend. 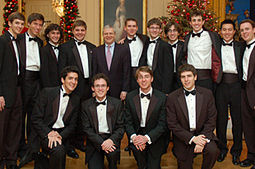 The Nassoons perform at the White House in December 2006. 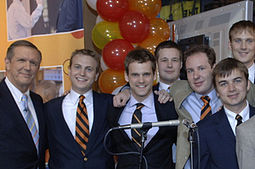 The Nassoons have a long history of domestic and international tours. The group typically tours every year during Fall Break (the last week of October), Intersession (the week between semesters, usually the last week of January), and Spring Break (varies). Recent international destinations have included Brazil, the Dominican Republic, the British Virgin Islands, Germany, Austria, Bermuda, Taiwan, Mexico, Jordan, Switzerland, and France. The Nassoons also have a long-running relationship with The Greenbrier Resort in West Virginia, where they travel each Labor Day weekend.

The Nassoons perform original arrangements and completely original pieces of all musical genres from the 1940s to today. Their arrangements include music from Cole Porter, The Beach Boys, Paul Simon, Billy Joel, 'N Sync, and Stevie Wonder. They also create and perform original music, some of which, such as 'Tigertown Blues' and 'Princeton is Free', has become signature music for the group. They record CDs every two years.