Candle making was developed independently in many countries throughout history. The earliest known candles were made from whale fat by the Chinese, during the Qin Dynasty (221–206 BC). In early China and Japan, tapers were made with wax from insects and seeds, wrapped in paper.[1] In India, wax from boiling cinnamon was used for temple candles.[1] During the 1st century AD, indigenous people of the Pacific Northwest fused oil from the eulachon, or "candlefish", for illumination.[1] 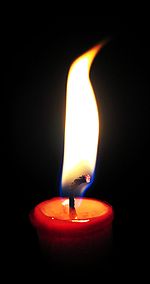 In parts of Europe, the Middle-East and Africa, where lamp oil made from olives was readily available, candle making remained unknown until the early middle-ages.

Qin Shi Huang (259–210 BC) was the first emperor of the Chinese Qin Dynasty (221–206 BC). His mausoleum, which was rediscovered in the 1990s, twenty-two miles east of Xi'an, contained candles made from whale fat.[2] The word zhú 燭 in Chinese originally meant torch and could have the Warring States Period (403–221 BC); some excavated bronzewares from that era feature a pricket thought to hold a candle.[3] The Han Dynasty (202 BC – 220 AD) Jizhupian dictionary of about 40 BC hints at candles being made of beeswax, while the Book of Jin (compiled in 648) covering the Jin Dynasty (265–420) makes a solid reference to the beeswax candle in regards to its use by the statesman Zhou Yi (d. 322).[3] An excavated earthenware bowl from the 4th century AD, located at the Luoyang Museum, has a hollowed socket where traces of wax were found.[3]

Wax from boiling cinnamon was used for temple candles in India.[1]

Generally these Chinese candles were molded in paper tubes, using rolled rice paper for the wick, and wax from an indigenous insect that was combined with seeds.

Japanese candles were made from wax extracted from tree nuts.

There is a fish called the eulachon or "candlefish", a type of smelt which is found from Oregon to Alaska. During the 1st century AD, indigenous people from this region used oil from this fish for illumination.[1] A simple candle could be made by putting the dried fish on a forked stick and then lighting it. The first candles to appear in Europe were made by nomadic tribes in the late Roman era, but are thought to have been in use much earlier in the colder climates of Northern Europe, where olive oil was scarce. These early candles were made from tallow, or animal fat. The tallow was put into the melting pot, then poured into molds made of bronze. A trough underneath would catch the excess wax and return it to the melting pot. For the wick, a cord, usually made from the pith of rushes, was suspended from a horizontal rod over the mold when the tallow was poured in. After the fall of the Roman Empire, when olive oil became increasingly scarce, and therefore expensive, the use of tallow candles spread across Western Europe. Later wax candles made from various plant extracts replaced tallow as the preferred source of illumination.

In Africa and the Middle East, candle-making remained relatively unknown due to the availability of olive oil for burning in lamps.

Yak butter was used for candles in Tibet[4]

Although candles could not be used to find a specific time they were instrumental in able to indicate passage of predetermined periods of time. For example the Anglo-Saxon king Alfred the Great (c. 849 - 899) used graduated candles, later known as candle-clocks. He used this candle to divide up his day into equal periods of study and prayer, royal duties, and rest. There were lines around the side to show the passing of each hour.[5] Later, 24-hour candles were invented based on the same concept.[6] During the Sung dynasty in China (960–1279) calibrated candles and sticks of incense measured time. The concept of this clock utilized six different threads with weights on the end. These were draped over an incense stick at regular intervals and as the incense burned, the threads simultaneously burned one by one and the weights dropped onto a sounding plate below. Sometimes the sticks of incense had varying scents so that hours were marked by a change in fragrance.

The first use of calibrated candles for time keeping in England was 870.

The candle clock was also used as a timer. A heavy nail inserted onto the candle at the indicated mark would fall down onto a hard surface after the wax surrounding the nail melted.[7]

Candles were also commonplace in many households scattered throughout Europe. In England and France candle making had become a guild graft by the 13th century. These candle makers (chandlers) went from house to house making candles from fats saved from the kitchen or sold their own candles from within their shops. 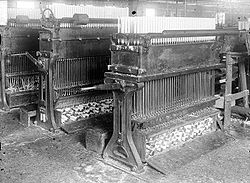 Candle moulding machine in Indonesia circa 1920

During the Middle Ages in Europe, the popularity of candles is shown by their use in Candlemas and on Saint Lucy festivities. Tallow, fat from cows or sheep, became the standard material used in candles in Europe. The Tallow Chandlers Company of London was formed in about 1300 in London, and in 1456 was granted a coat of arms. Dating from about 1330, the Wax Chandlers Company acquired its charter in 1484. By 1415, tallow candles were used in street lighting. The trade of the chandler is also recorded by the more picturesque name of "smeremongere", since they oversaw the manufacture of sauces, vinegar, soap and cheese. The unpleasant smell of tallow candles is due to the glycerine they contain. For churches and royal events, candles from beeswax were used, as the smell was usually less unpleasant. The smell of the manufacturing process was so unpleasant that it was banned by ordinance in several cities. The first candle mould comes from 15th century Paris[citation needed].

The first American colonists discovered that bayberries could be used to make candles, but the yield was very poor. Fifteen pounds of boiled bayberries would provide only one pound of wax.[8]

By the 18th century, the Chinese designed weights into the sides of candles; as such a candle melted, the weights fell off and made a noise as they landed in a bowl.

The growth of the whaling industry in the late 18th century brought about Spermaceti, oil that comes from sperm whale. This was the first major change in candle making since the Middle Ages. Spermaceti was a wax obtained by crystallizing the oil of a sperm whale. It became available in mass quantities. Like beeswax, the spermaceti wax did not elicit a repugnant odor when burned, and produced a significantly brighter light. It also was harder than either tallow or beeswax, so it wouldn't soften or bend in the summer heat. Historians note that the first "standard candles" were made from spermaceti wax. By 1800, a much cheaper alternative was discovered. Colza oil, derived from Brassica campestris, and a similar oil derived from rapeseed, yielded candles that produce clear, smokeless flames. The French chemists Michel Eugène Chevreul (1786–1889) and Joseph-Louis Gay-Lussac (1778–1850) patented stearin, in 1811. Like tallow, this was derived from animals, but had no glycerine content.

Joseph Sampson was granted a United States patent for a new method of candle making in 1790 (this was the second patent ever granted by the US).[9]

In 1834, Joseph Morgan began to industrialise the production of candles. He created a machine that allowed for continuous production of molded candles by using a cylinder with a moveable piston to eject candles as they solidified. This more efficient mechanized production produced about 1,500 candles per hour which allowed candles to become an easily affordable commodity for the masses.[10]

A chemist called Laurent distilled paraffin from schist in 1830. Another chemist, Dumas, obtained paraffin from coal-tar in 1835. Not until 1850 did paraffin become commercially viable, when James Young filed a patent to produce it from coal.[11] Paraffin could be used to make inexpensive candles of high quality. Paraffin was also processed by distilling residue left after crude petroleum was refined. It was a bluish-white wax, which was able to burn cleanly, and leave no unpleasant odor, something the predecessor could not achieve like the tallow candles. Although paraffin had a low melting point the discovery of stearic acid solved this problem. Stearic acid was hard and very durable which helped elevate the melting point of paraffin. It was being produced in mass quantity at the end of the 19th century. By this period, most candles being manufactured consisted of paraffin and stearic acid.

Despite advances in candle making, the candle industry was devastated soon after by the distillation of kerosene (a fuel used in lamps) and the 1879 invention of the Light bulb. From this point, candles became more of a decorative item.

In 1829, William Wilson of Price's Candles invested in 1,000 acres (4 km²) of coconut plantation in Sri Lanka.[12] His aim was to make candles from coconut oil.[13] Later he tried palm oil from palm trees. An accidental discovery swept all his ambitions aside when his brother George Wilson distilled the first petroleum oil in 1854. In 1919, Lever Brothers purchased Price's Candles and in 1922, a joint-owned company called "Candles Ltd" was created. By 1991, the last remaining owner of "Candles Ltd" was Shell Oil Company, who sold off the candle-making part of business.

A form of candle-clock was used in coal-mining until the 20th century.

Candles here are used to celebrate a birthday.

As candles started to wane as the major light source due to the introduction of the light bulb, they became a more decorative item. Candles were suddenly available in a broad array of sizes, shapes and colors, and consumer interest in scented candles began to escalate. During the 1990s, new types of candle waxes were being developed due to an unusually high demand for candles. In the U.S., agricultural chemists began to develop soybean wax which was a softer and slower burning wax than paraffin. On the other side of the globe, efforts were underway to develop palm wax for use in candles.