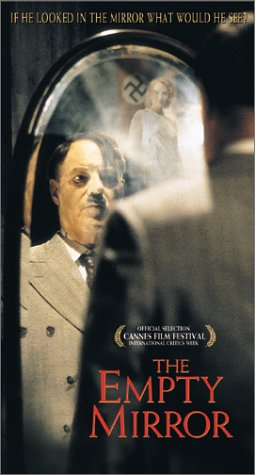 "The Empty Mirror" is a 1996 set in a world where and his cadre of closest followers survived the fall of . This speculative attempts to explore Hitler's mind as he converses with , , , and . It is a decidedly minimalist film set in a secret subterranean where Hitler spends endless hours watching films of his best years flicker over his for the new . Though he lost the war, Hitler still believes himself successful in becoming an immortal figure. His conversations add insight to his grand schemes, his obsession with blondes, and his moral justification for . At Freud's prompting, Hitler also looks into his own and fears. [ [http://movies2.nytimes.com/gst/movies/movie.html?v_id=136359 The Empty Mirror - Trailer - Cast - Showtimes - New York Times ] ]

While not cited in the movie or its credits, the movie is, for all intents and purposes, a dramatized version of Robert Waite's of Hitler, "" (1993, Da Capo Press). For example, the movie includes several psychological theories (Hitler's speculated fear of ) and his enjoyment of the artwork of , theories which only Waite has put forward.