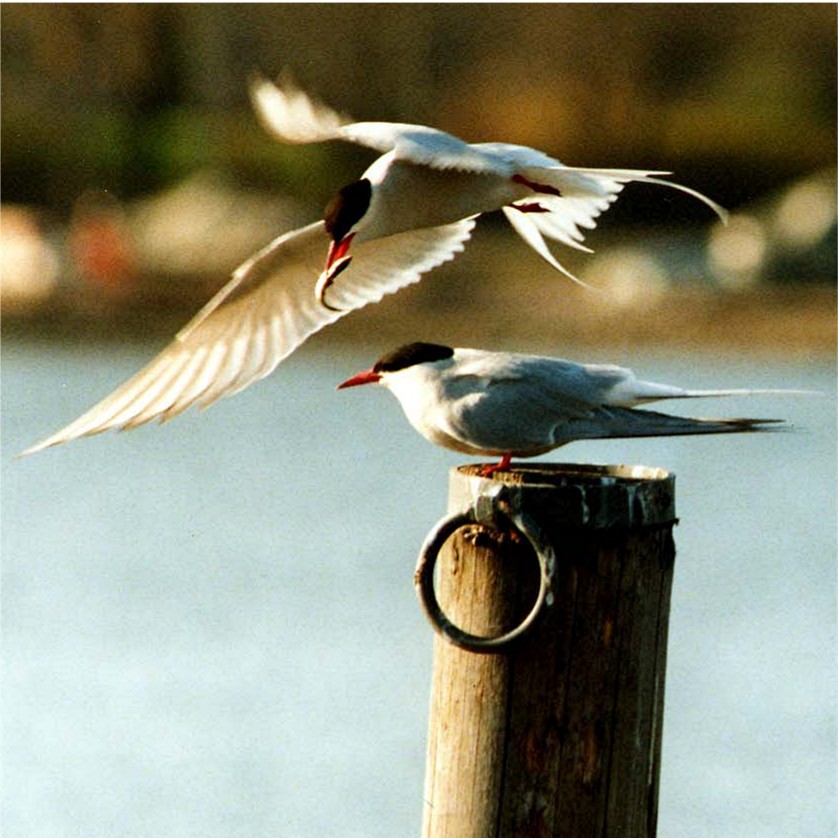 The Arctic Tern ("Sterna paradisaea") is a of the family . This has a distribution, breeding colonially in and sub-Arctic regions of , , and (as far south as Brittany and ). The is strongly migratory, seeing two summers each year as it migrates from its northern breeding grounds to the oceans around and back (about 24,000 miles) each year. This is the longest regular migration by any known animal. The arctic tern flies as well as glides through the air, performing almost all of its tasks in the air. The arctic tern lands once every one to three years (depending on their mating cycle) to nest at the northern shores of Antarctica; once they have finished nesting they take to the sky for another long southern migration.

Arctic Terns are medium-sized birds. They have a length of 33–39 centimetres (13–15 in) and a of 76–85 cm (26–30 in). They are mainly grey and white plumaged, with a red beak (as long as the head, straight, with pronounced ) and feet, white forehead, a black nape and crown (streaked white), and white cheeks. The grey mantle is 305 mm, and the scapulars are fringed brown, some tipped white. The upper wing is grey with a white leading edge, and the collar is completely white, as is the rump. The deeply forked tail is whitish, with grey outer webs. The hindcrown to the ear-coverts is black.

Arctic Terns are long-lived birds, with many reaching twenty years of age. They eat mainly fish and small marine s. The species is abundant, with an estimated one million individuals. While the trend in the number of individuals in the species as a whole is not known, exploitation in the past has reduced this bird's numbers in the southern reaches of its range.

The Arctic Tern is famous for its migration; it flies from its Arctic breeding grounds to the Antarctic and back again each year. This 19,000 km (12,000 mi) journey each way ensures that this bird sees two summers per year and more daylight than any other creature on the planet.

The adult is grey above, with a black nape and crown and white cheeks. The upperwings are pale grey, with the area near the wingtip being translucent. The tail is white, and the underparts pale grey. Both sexes are similar in appearance. The winter plumage is similar, but the crown is whiter and the bills are darker.

The species has a variety of calls; the two most common being the "alarm call", made when possible predators (such as humans or other s) enter the colonies, and the "advertising call". The advertising call is social in nature, made when returning to the colony and during aggressive encounters between individuals. It is unique to each individual tern and as such it serves a similar role to the of s, identifying individuals. Eight other calls have been described, from "begging calls" made by females during mating to "attack calls" made while swooping at intruders.

Arctic Terns mate for life, and in most cases, return to the same colony each year.

Both sexes agree on a site for a nest, and both will defend the site. During this time, the male continues to feed the female. Mating occurs shortly after this. Breeding takes place in colonies on coasts, islands and occasionally inland on tundra near water. It often forms mixed flocks with the Common Tern. It lays from one to three eggs per clutch, most often two.

It is one of the most aggressive terns, fiercely defensive of its nest and young. It will attack humans and large predators, usually striking the top or back of the head. Although it is too small to cause serious injury, it is still capable of drawing blood.

The nest is usually a depression in the ground, which may or may not be lined with bits of grass or similar materials. The eggs are mottled and camouflaged.

When hatched, the chicks are downy. Neither nor , the chicks begin to move around and explore their surroundings within one to three days after hatching.

Arctic Terns are long-lived birds that spend considerable time raising only a few young, and are thus said to be K-selected.

The diet of the Arctic Tern varies depending on location and time, but is usually carnivorous. In most cases, it eats small or marine .

Arctic Terns sometimes dip down to the surface of the water to catch prey close to the surface. They may also chase insects in the air when breeding.

While nesting, Arctic Terns are vulnerable to predation by cats and other animals.

Arctic Terns are considered threatened or species of concern in certain states. They are also among the species to which the "Agreement on the Conservation of African-Eurasian Migratory Waterbirds" applies.

At the southern part of their range, the Arctic Tern has been declining in numbers. Much of this is due to shortages of food. However, most of these birds' range is extremely remote, with no apparent trend in the species as a whole.

Birdlife International has considered the species to be at lower risk since 1988, believing that there are approximately one million individuals around the world.

The Arctic Tern has appeared on the of several countries and dependent territories. Territories include the , , and . Countries include , , , and .

They camouflage their eggs to protect them. They live in groups called colonies.