Infobox Film
name = Cause for Alarm! 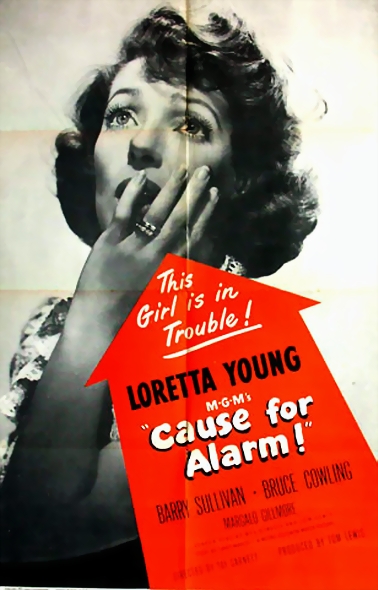 "Cause for Alarm!" (1951) is a "" suspense film directed by ("The Postman Always Rings Twice"), written by Mel Dinelli and Tom Lewis, based on a story by Larry Marcus.

A flashback shows how Ellen met George in a naval hospital during while she was dating his friend, Lieutenant Ranney Grahame (), a young military doctor whose busy schedule left little time for her. George was a pilot and Ellen swiftly fell in love with him, although the flashback strongly hints he had some capacity for arrogance and selfishness. Nevertheless, they soon married and after the war wound up in a leafy suburban neighbourhood.

Unhappily, George is now confined to his bed with heart problems, there is a heat wave and Ellen is spending most her time caring for him. George's doctor is their old friend Ranney, with whom George thinks his wife is having an affair. In response, Ranney suggests George may need psychological help. After Ellen tells her bedridden husband she dreams of having children, he becomes angry. Meanwhile George has written a letter to the district attorney in which he claims his wife and best friend are killing him with overdoses of medicine for his heart.

A little neighbour boy dressed as a movie cowboy and warding cap pistols () befriends the childless Ellen, who gives him cookies. He hands her a toy (fake) television set and asks Ellen to give it to George, which she does whilst serving her husband lunch in bed. He tells her an unsettling story about how as a child he had beaten a neighbour boy with a rake until he drew blood. Thinking the thick letter has something to do with insurance, Ellen gives it to the postman (), who sees George in the upstairs bedroom window. When Ellen rushes up to find out why he has gotten out of bed, George lets her know what the letter says and who it is addressed to. George pulls a gun and is about to kill her when he drops dead on the bed. In her narration she describes George's death as "one of those awful dreams."

Ellen panics over the letter and as noted by a reviewer over 50 years later, throughout the film's second half seems "much more concerned with absolving herself from the blame of his death than missing her spouse."

Ellen goes back up to the bedroom to change her clothes and sees the gun still in George's hand, narrating, "Somehow I knew I shouldn't leave it there." As she wrenches the pistol from his hand, it fires. Readying herself to leave the house, a polite but somewhat aggressive notary () rings the doorbell, telling her he has an appointment with George to go over some legal documents. She steadfastly says George is too sick to see anyone. Ellen desperately drives downtown to the post office to see the supervisor, who is friendly and gives her a form for George to sign but then, nettled by Ellen's unhinged and uncooperative behaviour, tells her he is going to allow the letter to be delivered. Defeated, she returns to the house and as she gets to the front door, a kindly neighbour woman () offers to help Ellen, since she has seemed so upset all day.

When Ranney shows up to check on George, Ellen has become hysterical. Ranney tells her to be calm and goes up to the bedroom. Showing no apparent emotion for his dead best friend, he sees the bullet hole in the floor, finds the gun in a dresser drawer, methodically repositions George's body in the bed and draws down the window shade. Back downstairs with Ellen, Ranney listens as she tells him what happened, saying "I did everything wrong, just like he said I would." The doorbell rings. She thinks the police have come to arrest her but Ranney urges Ellen to open the door. When she does, it is the postman, returning the letter for insufficient postage. Ranney shows a sigh of relief, Ellen takes back the envelope and is overcome after closing the door. Ranney wordlessly rips the letter into narrow strips and burns these shreds in an ashtray along with a matchbook bearing the embossed names "George and Ellen". The film ends with an underlying and unanswered question as to whether Ellen has been an .

Director thoroughly prepared both cast and crew and the film was shot in 14 days, a rather tight schedule for the era (Young reportedly used the same pre-production technique for her TV series a few years later). Some of the production involved location shooting on residential side streets near in . wrote the score.

"Cause for Alarm!" is among a few 1950s era films which apparently lapsed into the after their copyrights were not renewed in the 1970s.

* as Ellen Jones
* Barry Sullivan as George Z. Jones
* as Dr. Ranney Grahame
* as aunt Clara Edwards
* Bradley Mora as Hoppy (Billy)
* as Joe Carston, the postman
* as Mrs. Warren, the neighbor
* as Mr. Russell, the notary
* as the post office superintendent
* as the wounded sailor at a naval hospital

The film's producer Tom Lewis considered for the lead role before giving it to his wife Loretta Young. (a character actor who appeared in over 400 films during his career) was already widely known as the weary postman in the popular Blondie series of 28 films a decade earlier when he was cast as the postman chased by Ellen. [IMdB, " [http://us.imdb.com/name/nm0045784/bio Irving Bacon] , retrieved 11 February 2008.] Bradley Mora was a noted child actor on Broadway and had appeared in the 1950 filmed version of "". 's successful acting career on Broadway stretched back to the late teens and (the kindly neighbour gardening next door) had a small role in ' "" ten years before. went on to a long and successful career as a supporting actor on US television.

When the film was released in 1951, "New York Times" film critic , wrote, "Here a simple situation is turned into a thoroughly chilling business by highlighting the most humdrum staples of the everyday American scene... "Cause for Alarm" proves more than anything else that superior writing, directing and acting- and some imagination- can make a little go a long way... The suspense, under Director Tay Garnett, mounts steadily, almost unbearably, until a final plot twist so original that it's almost a swindle."

Although Crowther criticized the casting of "newcomer" as Ranney, calling his performance "wooden," he had only praise for Young, writing "...she does splendidly as the desperate housewife, avoiding all the pitfalls, even in her hysterical breakdown at the end." [Crowther, Bosley, " [http://movies.nytimes.com/movie/review?_r=1&res=9901E6D91E3EEF3BBC4850DFB566838A649EDE&oref=slogin The screen: three newcomers seen here] ", "New York Times", 30 March 1951, retrieved 1 February 2008.]

Time magazine characterized the film "as the year's first thriller with an honest quota of thrills. It pulls off the old Hitchcock trick of giving commonplace people, events and settings a sinister meaning, and it develops its simple, one-track idea with frightening logic." Time's review also noted the strong supporting performances of and along with the film's "quiet, sunny atmosphere of a pleasant residential street" in Los Angeles. [time.com, " [http://www.time.com/time/magazine/article/0,9171,814462,00.html The New Pictures] ", 26 February 1951, retrieved 10 February 2008.]

However, in later decades the film was widely ignored (falling into the ) and the few retrospective reviews were less flattering.

's short overview of "Cause for Alarm!" was kinder than many when he wrote, "But all those effects hit home, perfectly timed, and isn't that what counts?" 21st century reviews have tended towards Truffaut's take along with citing the film's suburban noir setting. "Rotten Tomatoes" notes, "Taut pacing, fine performances, and a great plot make this a classic thriller." [rottentomatoes.com, " [http://www.rottentomatoes.com/m/cause_for_alarm/#synopsis Cause for Alarm] ", retrieved 10 February 2008.]

The "All Movie Guide" also cites the performances of Gillmore and Bacon, along with describing the cinematography by and score by as "huge pluses." ["All Movie Guide", " [http://www.allmovie.com/cg/avg.dll?p=avg&sql=1:8672 Cause for Alarm] ", retrieved 10 February 2008.] Sean Axmaker calls "Cause for Alarm" "An unusual entry into the film noir school of paranoia" which "...trades the dark alleys and long shadows of urban menace for the sunny, tree-lined streets of middle-class domesticity" whilst noting, "Young's deadened narration adds an eerie mood of doom to the suburban setting." [Axmaker, Sean, " [http://www.amazon.com/Cause-Alarm-Loretta-Young/dp/155739623X Cause for Alarm - Editorial review] ", amazon.com, retrieved 10 February 2008.]