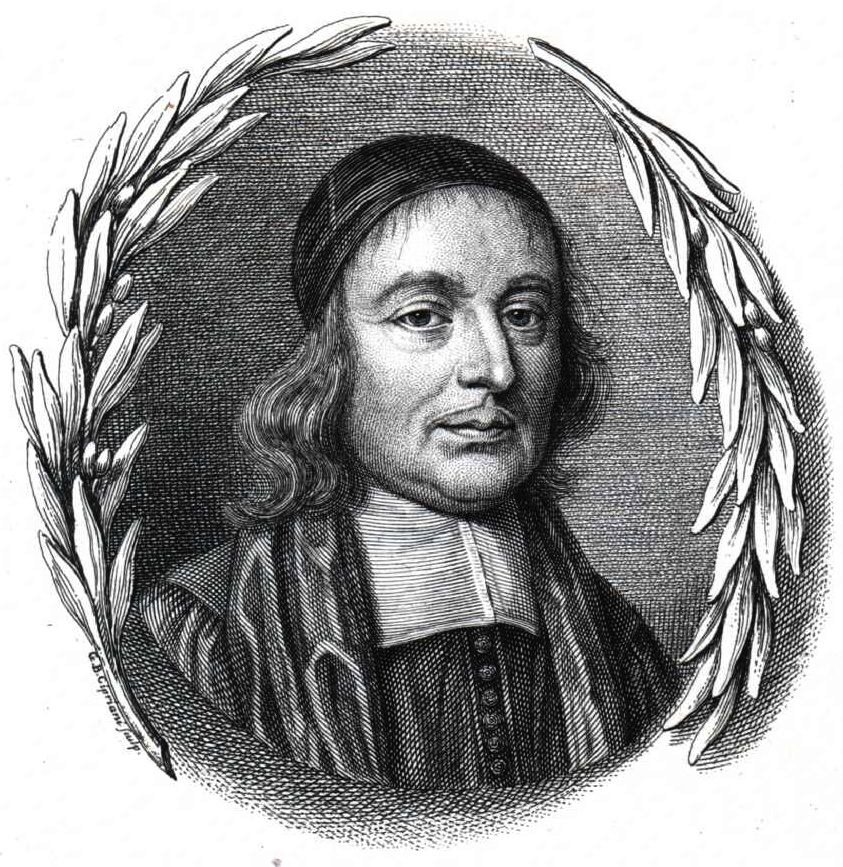 John Wallis (, - , ) was an English mathematician who is given partial credit for the development of modern . Between 1643 and 1689 he served as chief for Parliament and, later, the royal court. He is also credited with introducing the ∞ for . was named after him.

John Brehaut Wallis was born in , the third of five children of Reverend John Wallis and Joanna Chapman. Before..... Wallis was first exposed to mathematics in 1631, at Martin Holbeach's school in Felsted; he enjoyed maths, but his study was erratic, since: "mathematics, at that time with us, were scarce looked on as academical studies, but rather mechanical" (Scriba 1970).

As it was intended that he should be a doctor, he was sent in 1632 to . While there, he kept an "act" on the doctrine of the circulation of the blood; that was said to have been the first occasion in Europe on which this theory was publicly maintained in a disputation. His interests, however, centred on mathematics. He received his Bachelor of Arts degree in 1637, and a Master's in 1640, afterwards entering the priesthood. From 1643-49, he served as a non-voting scribe at the . Wallis was elected to a fellowship at in 1644, which he however had to resign following his marriage on 14 March 1645 to Susanna Glyde.

Throughout this time, Wallis had been close to the party, to whom he rendered great assistance in deciphering the royalist dispatches. The quality of cryptography at that time was mixed; despite the individual successes of mathematicians such as , the principles underlying cipher design and analysis were very poorly understood. Most ciphers were ad-hoc methods relying on a secret , as opposed to systems based on a variable key. Wallis realized that the latter were far more secure — even describing them as "unbreakable", though he was not confident enough in this assertion to encourage revealing cryptographic algorithms. He was also concerned about the use of ciphers by foreign powers; refusing, for example, 's request of 1697 to teach Hanoverian students about cryptography.

Returning to — he had been made at St Gabriel, Fenchurch Street, in 1643 — Wallis joined the group of scientists that was later to evolve into the . He was finally able to indulge his mathematical interests, mastering 's "Clavis Mathematicae" in a few weeks in 1647. He soon began to write his own treatises, dealing with a wide range of topics: throughout his life, Wallis made significant contributions to , , , and the analysis of .

Wallis joined the moderate Presbyterians in signing the remonstrance against the execution of Charles I, by which he incurred the lasting hostility of the Independents. In spite of their opposition he was appointed in 1649 to be the Savilian Chair of Geometry at Oxford University, where he lived until his death on October 28, 1703. Besides his mathematical works he wrote on , , and , and he was involved in devising a system for teaching deaf-mutes. Although had earlier taught a deaf man to speak ‘plainly and distinctly, and with a good and graceful tone’ [W. Holder, ‘Of an experiment, concerning deafness’,Philosophical Transactions of the Royal Society3 (1668), 665–8] . Wallis later claimed credit for this, leading Holder to accuse Wallis of 'rifling his Neighbours, and adorning himself with their spoyls’ [Holder,PTRS Supplement, 10] .

In 1655, Wallis published a treatise on in which they were defined analytically. This was the earliest book in which these curves are considered and defined as curves of the second degree. It helped to remove some of the perceived difficulty and obscurity of ' work on .

"Arithmetica Infinitorum", the most important of Wallis's works, was published in 1656. In this treatise the methods of analysis of Descartes and Cavalieri were systematised and extended, but some ideals were open to criticism. He begins, after a short tract on conic sections, by developing the standard notation for powers, extending them from to :

Leaving the numerous algebraic applications of this discovery, he next proceeds to find, by integration, the area enclosed between the curve "y" = "x""m", the axis of "x", and any ordinate "x" = "h", and he proves that the ratio of this area to that of the parallelogram on the same base and of the same height is 1/("m" + 1). He apparently assumed that the same result would be true also for the curve "y" = "ax""m", where "a" is any constant, and "m" any number positive or negative; but he only discusses the case of the parabola in which "m" = 2, and that of the hyperbola in which "m" = −1. In the latter case, his interpretation of the result is incorrect. He then shows that similar results might be written down for any curve of the form

He illustrates this by the parabola, in which case "m" = 2. He states, but does not prove, the corresponding result for a curve of the form "y" = "x"p/q.

Wallis showed considerable ingenuity in reducing the equations of curves to the forms given above, but, as he was unacquainted with the , he could not effect the , whose equation is , since he was unable to expand this in powers of "x". He laid down, however, the principle of . Thus, as the ordinate of the circle is the geometrical mean between the ordinates of the curves and , it might be suppose that, as an approximation, the area of the semicircle which is might be taken as the geometrical mean between the values of

that is, 1 and ; this is equivalent to taking or 3.26... as the value of π. But, Wallis argued, we have in fact a series ... and therefore the term interpolated between 1 and ought to be chosen so as to obey the law of this series. This, by an elaborate method, which is not described here in detail, leads to a value for the interpolated term which is equivalent to taking: (which is now known as the ).

In this work also the formation and properties of s are discussed, the subject having been brought into prominence by Brouncker's use of these fractions.

A few years later, in 1659, Wallis published a tract containing the solution of the problems on the which had been proposed by . In this he incidentally explained how the principles laid down in his "Arithmetica Infinitorum" could be used for the rectification of algebraic curves; and gave a solution of the problem to rectify (i.e. find the length of) the semi-cubical parabola "x"3 = "ay"2, which had been discovered in 1657 by his pupil . Since all attempts to rectify the ellipse and hyperbola had been (necessarily) ineffectual, it had been supposed that no curves could be rectified, as indeed Descartes had definitely asserted to be the case. The had been rectified by , and was the first curved line (other than the circle) whose length was determined, but the extension by Neil and Wallis to an algebraic curve was novel. The cycloid was the next curve rectified; this was done by Wren in 1658.

Early in 1658 a similar discovery, independent of that of Neil, was made by , and this was published by in his edition of Descartes's Geometria in 1659. Van Heuraët's method is as follows. He supposes the curve to be referred to rectangular axes; if this be so, and if ("x", "y") be the coordinates of any point on it, and "n" be the length of the normal, and if another point whose coordinates are ("x, η") be taken such that "η : h = n : y", where h is a constant; then, if "ds" be the element of the length of the required curve, we have by similar triangles "ds : dx = n : y". Therefore "h ds = η dx". Hence, if the area of the locus of the point ("x, η") can be found, the first curve can be rectified. In this way van Heuraët effected the rectification of the curve y3 = ax2 but added that the rectification of the parabola y2 = ax is impossible since it requires the quadrature of the hyperbola. The solutions given by Neil and Wallis are somewhat similar to that given by van Heuraët, though no general rule is enunciated, and the analysis is clumsy. A third method was suggested by Fermat in 1660, but it is inelegant and laborious.

The theory of the collision of bodies was propounded by the Royal Society in 1668 for the consideration of mathematicians. Wallis, Wren, and Huygens sent correct and similar solutions, all depending on what is now called the conservation of momentum; but, while Wren and Huygens confined their theory to perfectly elastic bodies, Wallis considered also imperfectly elastic bodies. This was followed in 1669 by a work on statics (centres of gravity), and in 1670 by one on dynamics: these provide a convenient synopsis of what was then known on the subject.

In 1685 Wallis published "Algebra", preceded by a historical account of the development of the subject, which contains a great deal of valuable information. The second edition, issued in 1693 and forming the second volume of his "Opera", was considerably enlarged. This algebra is noteworthy as containing the first systematic use of formulae. A given magnitude is here represented by the numerical ratio which it bears to the unit of the same kind of magnitude: thus, when Wallis wants to compare two lengths he regards each as containing so many units of length. This perhaps will be made clearer by noting that the relation between the space described in any time by a particle moving with a uniform velocity is denoted by Wallis by the formula "s" = "vt", where "s" is the number representing the ratio of the space described to the unit of length; while the previous writers would have denoted the same relation by stating what is equivalent to the proposition "s1 : s2 = v1t1 : v2t2". It is curious to note that Wallis rejected as absurd the now usual idea of a negative number as being less than nothing, but accepted the view that it is something greater than infinity — a viewpoint shared by Swiss mathematician . (The argument that negative numbers are greater than infinity involves the quotient and considering what happens as x approaches and then crosses the point x = 0 from the positive side.) Despite this he is generally credited as the originator of the idea of the number line where numbers are represented geometrically in a line with the positive numbers increasing to the right and negative numbers to the left.

One aspect of Wallis's mathematical skills has not yet been mentioned, namely his great ability to do mental calculations. He slept badly and often did mental calculations as he lay awake in his bed. One night he calculated the square root of a number with 53 digits in his head. In the morning he dictated the 27 digit square root of the number, still entirely from memory. It was a feat which was rightly considered remarkable, and Oldenburg, the Secretary of the Royal Society, sent a colleague to investigate how Wallis did it. It was considered important enough to merit discussion in the Philosophical Transactions of the Royal Society of 1685.

Wallis is portrayed as the villain of the historical mystery novel by .

The initial text of this article was taken from the resource:

, 1908." [http://www.maths.tcd.ie/pub/HistMath/People/Wallis/RouseBall/RB_Wallis.html A Short Account of the History of Mathematics,] " 4th ed.