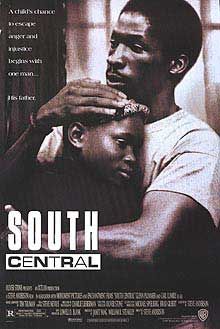 "South Central" is a 1992 , written and directed by Steve Anderson. This film is an adaptation of the novel by , a former high school teacher in . The film stars , , and .

Bobby () is a young black gang member of "", who gets convicted and jailed for a murder he committed. Just days before he kills a rival gang member, Bobby's girlfriend Carole () gives birth to his son Jimmie (). While in prison, he converts to Islam, matures and transforms himself, and decides he wants to live an honest life.

After serving a 10 year prison sentence, he returns to the neighborhood he once controlled, South Central Los Angeles, along with his former gang. His childhood friend Ray Ray () is now leading the "Deuces". Carole has become addicted to drugs, and works as a hooker to support her habit. And, he and Carole's 10-year old son Jimmie is now a junior member of his old gang (Hoover Deuce), with Ray Ray as his mentor. Bobby must use everything he has learned from prison to save his son from the violent future as a gang member.