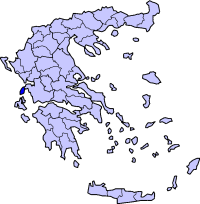 Lefkada, or Leucas ( _el. Λευκάδα, IPA2|le̞fˈkaða; and : Λευκάς, "Leukás"; _it. Santa Maura) is a Greek island in the on the west coast of Greece, connected to the mainland by a long and . The city of Lefkada, is at the north of the island, approximately 20 minutes by automobile away from . The Prefecture of Lefkada comprises Lefkada island plus the smaller nearby islands of , Kalamos, , , , and Sparti. It is the smallest prefecture of Greece in both land area and population (2001 census).

The myth about Sappho's suicide at Cape Lefkada is related to other myths linking the island to the ancient Greek goddess of love, , and to , the hero of 's Odyssey. The German archaeologist , having performed excavations at various locations of Lefkada, was able to obtain funding to do work on the island by suggesting that Lefkada was , and the of Odysseus was located west of off the south coast of Lefkada. There have been suggestions by local tourism officials that several passages in the point to Lefkada as a possible model for Homeric Ithaca. The most notable of these passages pushed by the local tourism board describes Ithaca as an island reachable on foot, which was the case for Lefkada since it is not really an island, that it was connected to the mainland by a narrow causeway.

The east coast section of the island has small of Lefkada, and , all north of the largest resort on the island—. It is set in a sheltered location with views across to —owned by , and other small islands, as well as the Greek mainland. The main coastal road from Lefkada to Vasiliki runs through the town, although a bypass is being built. There are regular car ferries to , and Meganissi.

20km south of Nidri is the resort of Vasiliki—a center. There are ferries here to Kefalonia and Ithaca. South of Vasiliki is , where the Greek female poet allegedly leapt to her death from the 100 foot (30m) high cliffs.

The West coast, facing the great expanse of the , has the famed beach of . Lefkada was attached to mainland Greece (see above about Homer's Ithaca being Lefkada). The ians dug a trench in the 7th century BC on its isthmus. [ 10.452]

The island has a typical Mediterranean climate: hot summers and cool winters, especially in the mountains.

Note: Meganisi, Kalamos, and Kastos are all on separate islands, whereas the rest of the above are actually on itself.

=Other= The fictional island Malden from the is based on Lefkada.