Donner Party timeline provides an almost day-to-day basic description of events directly associated with the 1840s Donner Party pioneers, covering the journey from Illinois to California—2,500 miles (4,023 kilometers), over the Great Plains, two mountain ranges, and the deserts of the Great Basin.

The timeline is based on:

Following the timeline is a chronological list of deaths. 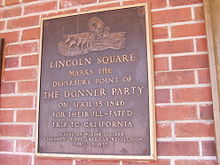 Plaque commemorating Donner Party in Springfield, Illinois. Placed by the Children of the American Revolution.

There were 87 emigrants in the Donner Party, plus Luis and Salvador, two California Indians who joined them in Nevada, for a total of 89 people. Of the 89, only 81 were trapped in the mountains because there had been additions to and subtractions from the group along the way.