The Poldark Novels
For the BBC television series, see Poldark.

The Poldark Novels are a historical fictional sequence by Winston Graham.

The main character, Ross Poldark, a British Army officer, returns to his home in Cornwall from the American Revolutionary War only to find that his fiancée, Elizabeth Chynoweth, having believed him dead, is about to marry his cousin, Francis Poldark. Ross attempts to restore his own fortunes by reopening one of the family's tin mines. After several years he marries Demelza Carne, a servant girl, and is gradually reconciled to the loss of Elizabeth's love. By then, Elizabeth has become a widow and marries George Warleggan, Ross's arch-enemy.

There are a total of twelve novels. The first seven novels are set in the 18th century, until Christmas 1799. The remaining five are concerned with the early years of the 19th century and the lives of the children of the main characters of the previous novels.

Winston Graham wrote the first four Poldark books during the 1940s and 1950s. Following a long hiatus, he decided to resume the series and The Black Moon was published in 1972. The first seven books formed the basis of the BBC television series Poldark (1975-77). 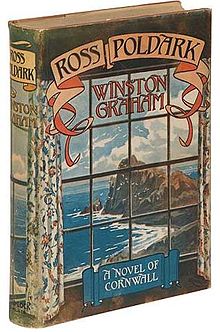 All of the novels were subtitled A Novel of Cornwall.[1] Graham explained his decision to revive the series in a preface to The Black Moon.

Ross Poldark is the main character of the series. In his autobiography, Graham states that the character of Ross was, in part, based upon a fighter pilot he met on a train during World War II. In the opening novel, Ross Poldark, he returns home from the American war. He learns that his fiancée, Elizabeth, has promised to marry his cousin, Francis. Brooding and introspective, life is bleak for Ross after his return.

She was Ross Poldark's first love. Elizabeth is delicate and beautiful. Her only passion is for her son, Geoffrey Charles, whose birth brings about the disintegration of her already bad marriage to Francis. After his death, she marries George Warleggan.

Ross's cousin Francis has a tendency to be flippant, but his feelings are strong and he can be very obstinate. The two cousins were friends as boys, but their relationship is tested severely by an impulsive act by Demelza, which has lasting repercussions on them all. He eventually becomes dissolute and debt-ridden, but is redeemed only to drown in a flooded mine shaft, having found a potential rich source of copper.

Ross's rival. George is one of a new class of industrialists and bankers. He is considered an upstart by the aristocracy, but he becomes increasingly powerful. He is impeccably behaved and dressed, and is sometimes ruthless. He is enamored of Elizabeth, who eventually marries him.

Francis's sister and Ross's cousin, Verity is described as plain, with fluffy hair and a mobile mouth. She is a dutiful unmarried daughter who looks after the affairs of her father, Charles Poldark, and his estate. She meets and falls in love with Andrew Blamey, a sea captain. Unfortunately he has a terrible secret that is soon revealed, and she seems to lose her chance of happiness.

A young doctor who comes to the area, he soon befriends Ross Poldark, and their friendship becomes very strong and enduring. He is a very conscientious doctor, and, like his friend Ross, a philanthropist, often not charging his poorest patients for his services. He becomes involved with a young miner's wife, with tragic results. He eventually marries a young heiress, Caroline Penvenen.

18 years old when she first meets Dwight Enys, Caroline is an orphan, taken in and raised by her rich uncle Ray. Strong-willed and independent, she begins a romance with Dwight against her uncle's wishes, culminating in a disastrous plan to elope. They eventually marry several years later when Dwight is released from a prison camp in France.

Taken home from Redruth Fair by Ross, 13-year-old miner's daughter Demelza and her dog Garrick have an unpromising start. However, she soon develops into a charming, amusing, and lovely young woman, eventually winning the love and affection of Ross. Dark and earthy, she is the total opposite of the fragile Elizabeth, and the two women heartily dislike each other. Demelza has courage and is fiercely loyal to Ross. However, she is somewhat impulsive, which causes trouble for both her and Ross.

Osborne Whitworth appears briefly in the first Poldark series of novels but comes to feature prominently in the second series when he marries Morwenna Chynoweth. Whitworth's main preoccupations are money and women. He is loud and arrogant and delivers sermons that do more to intimidate his parishioners than to inspire them. When deprived of his wife's sexual companionship during her pregnancy he begins an affair with her fifteen-year old sister, Rowella, which proves to be his undoing.

Themes within the books

Ross Poldark never really recovers from losing Elizabeth, although he finds himself liking her less over the years. She tells him early on that she should never have married Francis, implying that he, Ross, was the one for her. He has to know that for years. When Francis dies, the widowed Elizabeth promises to marry George, and she starts a sequence of events that will ultimately destroy her. Demelza is never less than sure about her feelings for Ross, even when his actions test her loyalties to the limit. She develops feelings for another man later in the 7th novel, and this relationship almost destroys what she has with Ross. Verity and Andrew are brought together by Demelza after a long separation. Ross must pay dearly for that happy ending. The theme of enduring love is a recurrent one throughout the novels, and Demelza's brother Drake endures a tragic love affair with Elizabeth's cousin Morwenna (which, after incredible misery, culminates in marriage).
Dwight and Caroline separate because of a misunderstanding and find each other when Dwight is near death after imprisonment in France. They separate again several times during the course of the books but always find each other again.

The rivalry between George and Ross is a recurring theme throughout the entire series of novels. The two men can be seen as opposites; and it is not just a case of good versus evil. Ross is a landowner with an ancient name, even in penury he associates easily with the aristocracy. Indeed on one occasion he is asked to give advice to the future King George IV on the progress of the war. He has a strong moral code, and a philanthropic tendency, helping his poorer neighbours and employees. He is well thought of by the local community. However Ross has a wild and lawless tendency, and he often finds himself performing criminal acts, breaking and entering being one of his favourites. He also tends to drink alcohol too much. George by comparison is almost abstinent; he wants to stay in control. More than money, George is driven by power. He has the ability to ruin people, and at one point he almost bankrupts Ross and Demelza, were it not for the assistance of a mysterious friend (whose identity is revealed later). He is very sensitive about his origins, being the grandson of an illiterate blacksmith. On more than one occasion Ross and George have an altercation. Their feud extends to their children, particularly the unlucky Valentine (whose parentage is often questioned).

Much of the drama is about the friction between the wealthy upper classes and the working poor. The revolutions in America and France cause the British working classes to question their extreme poverty, and the aristocracy to fear the loss of their wealth and privilege. England is struggling to recover from recent unsuccessful warfare, and economic conditions foster food riots, smuggling, poaching, and child labor among the miners. In contrast, Graham details the hours-long, lavish meals considered normal among the wealthy. Ross is often more comfortable with his impoverished tenants and employees than he is among his aristocratic peers. The two women he loves, Demelza and Elizabeth, epitomize the differences between the social classes from which they come. George Warleggan rises from humble roots to become wealthy and powerful, and he resents Ross for caring so little for the class privilege into which he was born.

This is provided, to a very large extent, by Ross Poldark's irascible old servant, Jud Paynter. Lazy, shifty and frequently drunk, he and his awful "wife" Prudie are superb comic inventions. Jud speaks in an almost incomprehensible Cornish dialect, using phrases repeatedly (for instance "ted'n right, ted'n proper"). He is an old rogue that Ross should have disposed of years ago but cannot bring himself to do so (although he does eventually). The comic element is often provided by the exchanges between the young Demelza and her teacher/husband Ross. In the first five books Aunt Agatha is still alive, an elderly relative living at Trenwith, the home of Francis Poldark. As she is almost completely deaf, she often commits faux pas by commenting rudely about people within their hearing. She does this often with George Warleggan, but one suspects this is deliberate.

The first seven books of the novel sequence were adapted by the BBC in a series broadcast between 1975 and 1977.

In 1996 an adaptation of "The Stranger From the Sea" in a controversial production by HTV, using a completely new cast featuring John Bowe as Ross Poldark and Mel Martin as Demelza. Fans protested and over 50 members of the Poldark Appreciation Society picketed HTV's headquarters in Bristol wearing 18th century costumes.[3] The pilot was not a success and no further episodes were made.