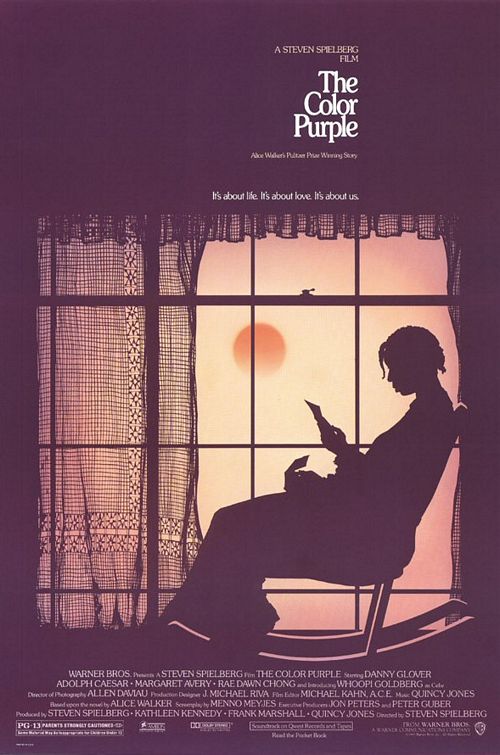 "The Color Purple" is a 1985 directed by . It is the eighth film directed by Spielberg and is based on the -winning novel of the same name by . The film tells the story of a young girl named Celie and shows the problems faced by African American women during the early 1900s; including , and . The character Celie is transformed as she finds her self-worth through the help of two strong female companions.

Taking place in the Southern United States during the early- to mid-1900s, the film follows the life of a poor girl, Celie Harris (), whose abuse begins when she is young. By the time she is fourteen, she has already had two children by her father (later discovered to be her stepfather), who takes them away from her at childbirth and forces Celie to marry a local widower whom she calls "Mister" (), but his name is Albert Johnson. Mister, who had his eyes on Celie's younger, more attractive sister Nettie (), treats Celie like a slave, making her clean up his disorderly household and take care of his unruly children. Mister beats and rapes her often, intimidating Celie into near silence and submission. Nettie comes to live with them, and there is a brief period of happiness as the sisters spend time together and Nettie begins to teach Celie how to read. This is short-lived, however; after Nettie refuses Mister's predatory affections once too often, he kicks her out.

Mister's old flame, the jazz singer Shug Avery (), for whom Mister has carried a torch for many years, comes to live with him and Celie. Delirious with sickness, Shug initially insults Celie by saying "you sure is ugly" on their first meeting, but they eventually become close friends and Shug helps Celie begin to see her worth as a human being. Shug and Celie also entertain a affair; this was more pronounced in the book, and is only hinted at in the film. Celie also finds strength in Sofia (), who marries Mister's son Harpo (). Sofia has also suffered abuse from the men in her family, but unlike Celie, she refuses to tolerate it. This high-spiritedness proves to be her downfall, however, as a rude remark to the town mayor's wife ends with Sofia in jail.

Nettie, meanwhile, has been living with missionaries in Africa and writing to Celie often. Unbeknownst to Celie, Mister confiscates Nettie's letters, telling Celie that she will never hear from her sister again. During a visit from Shug and her new husband, Celie and Shug discover many years' worth of Nettie's correspondence. Reconnecting with her sister and the assurance that she is still alive helps give Celie the strength to stand up to Mister, threatening his life and then leaving him permanently.

Celie opens up a selling "one size fits all" slacks. Upon the death of her father, she learns that he was, in fact, her stepfather, and that she has inherited a house from her real father. Meanwhile, Mister's fields languish as he slips into alcohol-fueled idleness. Years of guilt finally catch up to Mister, knowing he has been a horrible person most of his life, especially to Celie. In a sudden act of kindness unknown to Celie, Mister takes all the money he has saved over the years, goes down to the immigration office, and arranges for a family reunion for Celie. The film ends when Nettie and Celie's children, Adam and Olivia (raised in Africa), are reunited with Celie at last.

Though the film was nominated for eleven , including Best Picture, Best Actress for Goldberg and Best Supporting Actress for both Avery and Winfrey, it did not win any.

Other critics felt that the film had changed or eliminated much of the book's defense of .

Some civil rights leaders were upset that a film about a disadvantaged and abused black woman was being directed by Spielberg, who was better known for his fantasy and adventure films rather than a filmmaker of serious dramas even though Alice Walker herself insisted on him directing.fact|date=March 2008.

Spielberg was awarded the for best motion picture director, his first.

"The Color Purple" was also nominated for five Golden Globes, including Best Picture (Drama), Best Director for Spielberg, and Best Supporting Actress for Winfrey. Its only win went to Goldberg for Best Actress (Drama).

* "Mister" is not given a full name in the novel. In fact, a blank is in place where his name would be. However, in the book Shug refers to him as Albert and Celie writes that she didn't know that was his name. In the film, he is called "Albert" by Shug and others, and the "Johnson" surname is clearly seen on the mailbox and mail he receives.
* The scene where Mister separates Celie and Nettie, then throws Nettie off his farm, did not happen in the novel. Instead, Nettie runs away before Mister had the chance. The reason for her sudden departure is the same as it was in the movie (with Nettie hitting Mister), but it isn't revealed until later on in the novel when Celie is reading her letters
* The novel goes into more details concerning Nettie's time in Africa, including her subsequent marriage to the Reverend after Corrine dies.
* The novel also reveals that Corrine thought that Olivia and Adam were Nettie's children (not Celie's) because they look like her. This is the reason they allowed Nettie to join them for the missionary trip to Africa.
* The scene where Celie meets Corrine and Olivia in the store, Olivia is a baby. In the novel she is six years old.
* The novel details the relationship between Grady (Shug's husband) and Squeak (Harpo's girlfriend). They get together and move to Panama where he grows marijuana. Eventually Squeak leaves him and returns to the US.
* In the book Shug runs off with a young man named Germaine, then returns back to Celie.
* In the novel, Mister did not have anything to do with Nettie's return to the US.
* In the novel, Mister is actually with Celie and company when Celie is reunited with Nettie and her children, while in the movie, he watches the reunion from a distance, noticed only by Shug.
* In the novel, Mister's father only appears in the scene on the porch, whereas in the movie, he also appears in the Thanksgiving Dinner scene, and once more in the scene where Mister has fallen into an alcoholic haze after Celie leaves him.
* In the novel, Celie's sexual development towards and her lesbian relationship with Shug Avery are given much more prominence, whereas they are almost non-existent in the film.
* In the novel, Celie's religious development from a belief system to the more nature-oriented is given more prominence.