To Catch a Thief (film)

To Catch a Thief (film)

Infobox_Film
name = To Catch a Thief 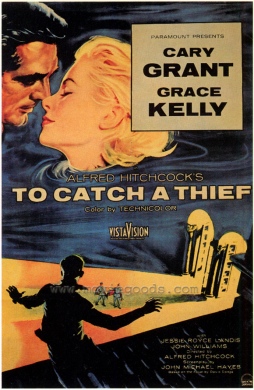 " To Catch a Thief" is a film directed by , starring , , and John Williams. The movie is set on the , and was based on the novel of the same name by David Dodge. The screenplay was written by . The film is a blend of intrigue, romance, and humor.

John Robie (Cary Grant) is a notorious but retired jewel thief or "cat ," nicknamed "The Cat," who now tends to his s in the South of . A series of robberies that closely resemble his style leads the police to believe that the Cat is up to his old tricks again. They come to arrest him, and he adeptly gives them the slip.

He immediately seeks refuge with his old gang from his days in the , a group of ex-cons whose patriotic work led to grants of parole that depend on keeping their noses clean. Bertani, Foussard, and the others are all under a cloud while the Cat is at large, and they blame Robie. Still, when the police arrive at Bertani’s restaurant, Foussard’s daughter Danielle () spirits her old flame to safety.

Robie enlists the aid of an insurance man of Bertani's acquaintance, H. H. Hughson (John Williams), in order to prove his innocence. Robie's plan is to catch the new cat burglar in the act. To do this, he obtains a list of the most expensive jewels on the Riviera from the reluctant Hughson. The first names on the list are Jessie Stevens (Jessie Royce Landis) and her daughter Francie (Grace Kelly). Robie strikes up acquaintance with them -- one met with delight by Jessie, a pretense of modesty with Francie, and claws-baring jealousy from Danielle.

Francie is not afraid of a little fun. Although she sees through Robie’s cover as an American industrialist, the considerable charms of this thief are worth catching. She dangles before him her jewels, teases him with steamy tales of rooftop escapades, exposes herself as a feline of a special breed: an accomplice who might share his passion and be available to his sordid desires. Fireworks fill the night and can even be seen in the sky.

That night, Jessie's jewels are stolen, and Francie suddenly feels that Robie has taken advantage of her. He narrowly evades the clutches of the police and goes back on the lam.

He stakes out a house where he believes the new burglar will strike and is violently attacked. In the ensuing struggle he kills the attacker. It’s Foussard, Bertani's wine steward.

The police chief is satisfied that Foussard was the jewel thief, but, as Robie points out to him in the presence of the abashed Hughson, this would have been impossible: Foussard had a prosthetic leg and couldn't possibly climb on rooftops.

After Robie is ejected from Foussard’s funeral, Francie apologizes and confesses her love for him. They agree to attend a masquerade ball the coming weekend.

At the ball, Francie is resplendent in a gold gown, Robie unrecognizable behind the mask of a Moor. The police hover nearby, ready to arrest Robie at the drop of a hat. When Jessie asks the Moor to go get her "heart pills," Robie’s voice tips off his identity to the authorities. Upon his return the police wait out Francie and the Moor as they dance the night away. Upstairs, the cat burglar strikes, cleaning out many a jewel box. Finally, Francie and the Moor go to her room, and the mask is removed: it’s Hughson, switched in to conceal Robie’s exit.

On the rooftop Robie lurks. His patience is finally rewarded when he is joined by another figure in black. But just as his pursuit begins, the police throw a spotlight on him. Again he flees and shots ring out, but he manages to corner his foe with jewels in hand. Unmasked, his nemesis turns out not to be a man after all. Danielle is "The Cat," and she confesses that she’s been working for her father and Bertani.

Robie speeds back to his vineyards, and Francie races after to convince him that he needs a woman around. He agrees but seems less than thrilled about including her mother.

This was Hitchcock's first of five films in the widescreen process . "To Catch a Thief" is unique in that it is the only Hitchcock film released by Paramount that is still owned and controlled by Paramount. All others were sold to Hitchcock in the early 60's (except "Psycho") and are currently distributed by (which bought "Psycho" outright in 1968), which also controls most of Paramount's pre-1950 sound library. [cite book
last = Spoto
first = Donald
authorlink =
title = The Dark Side of Genius: The Life of Alfred Hitchcock
publisher = Da Capo
date = 1999
pages = 344
doi =
isbn = 030680932X ]

The movie and its filming process are also heavily referred to in 's book "" (The Basil War).

In this film plays Cary Grant's potential mother-in-law. In "" she would play his character's mother. She was just seven years older than Grant.

This was Grace Kelly's final film for Hitchcock; she became Princess Grace of in 1956. designed Grace's clothes for the production, including a memorable golden ball gown. Hitchcock later tried to cast Princess Grace in "Marnie" (1964), but citizens of Monaco expressed disapproval in her acting in another film; she later served as a narrator for at least two films.

* Alfred Hitchcock's cameo is a signature occurrence in most of his films. In "To Catch a Thief" he can be seen (10 minutes into the film) as a bus passenger sitting next to Grant, whom Grant turns to look at.