Marbleizing or faux marbling is the preparation and finishing of a surface to imitate the appearance of polished marble. It is typically used in buildings where the cost or weight of genuine marble would be prohibitive. Faux marbling is a special case of faux painting used to create the distinctive and varied patterns of marble - the most imitated stone by far. 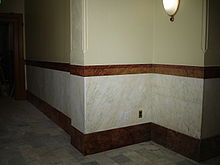 Faux painting by Andre' Martinez in the Colorado State Capitol 2005 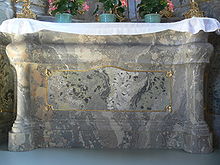 Faux stone painting was widely used in Pompeii, but it really took off in Europe during the Renaissance with two schools of faux painting developing. The Italian school was loose and artistic, the French school was formal and realistic. It typically took an apprentice ten years or more to fully master the art. The sophistication of the techniques are such that visitors are frequently unable to distinguish between false and real marble in many churches, palaces and public buildings in Europe. The techniques were perfected by the 17th century and have been used in all styles of construction well into the 20th century, including Baroque, palladian, neoclassical and historical revival styles as well as Art Nouveau and Art Deco buildings. Craftsmen who are able to replicate this work are still available, as evidenced, for example, by the extensive restorations of faux marble surfaces in important Eastern Europe buildings since 1990.

The art of marbling and graining reached its apogee in Britain between 1845 and 1870, and during this period the acknowledged master was Thomas Kershaw.[citation needed]

Kershaw was born in Standish, Lancashire England in April in 1819. At the age of twelve he was apprenticed to Mr. John Platt of Bolton who was paid the sum of Twenty Three Pounds by Kershaw’s father in order that his son could be instructed in the craft of house painting. He worked ten hours a day and six days a week. He completed his apprenticeship at the age of twenty one.

He achieved international fame, winning a number of the most prestigious awards at the major exhibitions of the age; The Great Exhibition, London, 1851 - a first prize medal; Exposition Universelle, Paris, 1855 - a first class medal; London Exhibition, 1862 - first prize.

His work was so good that it was often considered to be indiscernible from the original. He undertook work in many large, houses, mansions and stately homes throughout England and Wales and once declined an offer from the Russian Ambassador to imitate marbles on the interior of the Imperial Palace in St Petersburg. In 1858 he produced one of his important works in the Emperor’s Room in Buckingham Palace where all the pillars were done in imitation marble.

In modern times, William Holgate (1931-2002) from Clitheroe, Lancashire, was possibly the finest grainer & marbler in the world since Thomas Kershaw held the title 150 years ago.{cn} His achievements include the prestigious award known as the 'Freedom of the City and Guilds of London' and he was very proud to be made 'A Freeman of the Worshipful Company of Painter Stainers of Trinity Lane, London,' on March 14, 1995. He was also given the 'Lifetime Achievement Award' at the 2001 Paris Salon. His apprentice and protégé, Andrew Johnstone continues his tradition. 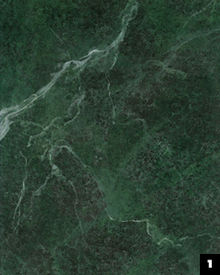 Example of a faux painting in antique verde marble

Other techniques for producing faux marble include Scagliola, a costly process which involves the use of specially pigmented plasters, and terrazzo, for flooring, in which marble chips are imbedded in cement, then ground and polished to expose the marble aggregate.

Modern professional faux finishers are very skilled and will use a variety of techniques to reproduce the colors, veining and luster of real marble or other building materials. However, many decorators will merely suggest the appearance of marble rather than accurately imitate a particular stone.