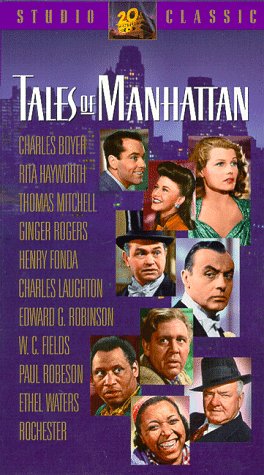 "Tales of Manhattan" is a 1942 directed by .Thirteen writers, including , , , , and worked on the six stories in this film.

The stories follow a black formal tailcoat that appears to be cursed.The first story is a love triangle between , Thomas Mitchell, and . Boyer plays an actor who gives his finest performance when he's shot while wearing the jacket.

The second tale is a comic story featuring who finds a romantic love letter in her future husband's jacket (the cursed jacket). The jacket was sold to him at a discount. Her boyfriend () enlists his best man () to help bail him out. Things don't go as suspected when Rogers becomes attracted to Fonda.

The third tale stars . He plays a poor but brilliant musician whose one big chance at fame and recognition is in jeopardy because of his wearing of the cursed tuxedo. While he attempts to conduct the small jacket rips and the audience erupts with laughter.

The fourth story stars as an alcoholic bum who takes a last shot at life by attending his 25th college reunion. The lawyer wears the jacket and cleans himself up in an attempt to convince his former classmates that he is successful.

The fifth story stars . This sequence was cut when the film was released to reduce running time. It was the easiest tale to cut without losing continuity, and ironically it was by far the funniest. and also appear. Some sources indicate the "running time" was a convenient excuse; others among the cast were not too crazy about the Fields sequence stealing more than its fair share of thunder. The cut sequence has since been restored, though it is apparently incomplete. Publicity stills indicate a "set up" scene wherein Fields is talking to Dumont (prior to getting the suit from Silvers' store), who is seated in the back of her limo. This evidently led to the lecture later at her home, and explained his need for the tux; the sequence picks up as the limo speeds off, with no rationale now for what follows. The ending is seemingly also truncated; how does the tux get back to Silvers' store in order for it to be stolen? This sequence was discovered in the Fox vaults in the mid-1990's seemingly intact and used in a special spotlighting cut sequences from the studio's films. It was later included as a supplement on the VHS release of the film, but not restored to its proper place in the film.

The final story emphasizes the second notion about the cursed jacket that what is bad for one person may be good for another. A thief steals the coat from a second-hand store and then commits a robbery at a fancy ball. When he attempts to escape by plane, the jacket and the money fall out . A poor African-American couple ( and ) in a deep South shanty community finds the jacket along with the over $40,000. They take it to their minister (Eddie Anderson) who gives out the "money from heaven" to people so that they can buy what they prayed for. After distributing the cash, the minister asks loner Christopher (George Reed) what his wish was. He says he prayed for a scarecrow for the fields. They take the now practically shredded jacket and make a scarecrow out of it. This section of the film, which featured what were considered crude black stereotypes even in 1942, came under severe criticism from both Edward G. Robinson, and especially, Paul Robeson, a champion of good film roles for blacks. Robeson was so incensed that he vowed never again to act in a Hollywood film. The sequence was, in the past, sometimes cut from television showings, giving the film a very abrupt ending.

* as Paul Orman
* as Ethel Halloway
* as Diane
* as George
* as Charles Smith
* as Avery 'Larry' L. Browne
* as Luke
* as Esther
* as Rev. Lazarus
* Thomas Mitchell as John Halloway
* as Luther
* as Harry Wilson
* as Ellen
* as Edgar
* as Squirrel
* as Elsa Smith
* as Arturo Bellini
* George Sanders as Williams
* as 'Father' Joe
* as Prof. Lyons
* as Costello