D.O.A. (1950), a film noir drama film directed by Rudolph Maté, is considered a classic of the genre. The frantically paced plot revolves around a doomed man's quest to find out who has poisoned him – and why – before he dies.[1]

Leo C. Popkin produced the film for his short-lived Cardinal Pictures, but failed to renew the copyright in 1977, so that it has fallen into the public domain. The Internet Movie Database shows that 22 companies offer the VHS or DVD versions, and the Internet Archive (see below) offers an online version.

The film begins with what a BBC reviewer called "perhaps one of cinema's most innovative opening sequences."[2] The scene is a long, behind-the-back tracking sequence featuring Frank Bigelow (Edmond O'Brien) walking through the hallway of a police station to report his own murder. Oddly, the police almost seem to have been expecting him and already know who he is. 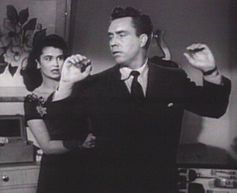 Marla Rakubian threatens Bigelow when he comes to her for information

A flashback begins with Bigelow in his hometown of Banning, California where he is an accountant and notary public. He decides to take a one-week vacation in San Francisco, but this does not sit well with Paula (Britton), his confidential secretary and girlfriend, since he is not taking her along.

Bigelow accompanies a group from a sales convention on a night on the town. At a "jive" nightclub called "The Fisherman", unnoticed by Bigelow, a stranger swaps his drink for another. The nightclub scene includes one of the earliest depictions of the Beat subculture. The next morning, Bigelow feels ill. He visits a doctor, where tests reveal he has unknowingly swallowed a "luminous toxin" for which there is no antidote. A second opinion confirms the grim diagnosis, and the other doctor implies that the poisoning must have been deliberate. Bigelow remembers his drink tasted strange.

With a few days to live at most, Bigelow sets out to untangle the events behind his impending death, interrupted occasionally by phone calls from Paula. She provides the first clue: a Eugene Philips had tried to contact him, but died the previous day. Bigelow travels to Philips' import-export company in Los Angeles, first meeting Miss Foster (Beverly Garland), the secretary, then Mr Halliday (William Ching), the comptroller, who tells him Eugene committed suicide. From there the trail leads to the widow, Mrs Philips (Lynn Baggett) and Eugene's brother Stanley (Henry Hart).

The key to the mystery is a bill of sale for what turns out to be stolen iridium. Bigelow had notarized the document for Eugene Philips six months earlier. He connects Eugene's mistress, Marla Rakubian (Laurette Luez), to gangsters led by Majak (Luther Adler). They capture Bigelow and, since he has learned too much about the theft, Majak orders his psychotic henchman Chester (Neville Brand) to kill him. However, Bigelow manages to escape.

Bigelow thinks Stanley and Miss Foster are his killers but when he confronts them, he finds Stanley has been poisoned too - after having dinner with Mrs. Phillips. In Stanley's case, prompt treatment may save his life. Stanley tells Bigelow that he found evidence that Halliday and Mrs. Philips were having an affair.

Bigelow then realizes that the theft was merely a diversion. Eugene discovered the affair and Halliday killed him. Halliday and Mrs. Phillips used the investigation of the iridium as a cover for their crime, making it seem that Eugene killed himself from shame. However, when they discovered that there was evidence of Eugene's innocence in the form of the notarized bill of sale, they realized no one would believe that Eugene killed himself over a false accusation that he could easily disprove. So Halliday systematically murdered anyone who had knowledge of the bill of sale and covered up its existence, including Bigelow. Bigelow tracks Halliday down and shoots him to death in an exchange of gunfire.

The flashback comes to an end. Bigelow finishes telling his story at the police station and dies, his last word being "Paula." The police detective taking down the report instructs that his file be marked "D.O.A." (dead on arrival).

The New York Times, in its May 1950 review, described it as a "fairly obvious and plodding recital, involving crime, passion, stolen iridium, gangland beatings and one man's innocent bewilderment upon being caught up in a web of circumstance that marks him for death." O'Brien's performance was said to have had a "good deal of drive", while Britton added a "pleasant touch of blonde attractiveness."[3] In 1981 Foster Hirsch carried on a trend of more positive reviews, calling Bigelow's search for his own killer noir irony at its blackest. He wrote, "One of the film's many ironies is that his last desperate search involves him in his life more forcefully than he has ever been before... Tracking down his killer just before he dies — discovering the reason for his death — turns out to be the triumph of his life."[4] Critic A. K. Rode notes Rudolph Maté's technical background, writing, "D.O.A. reflects the photographic roots of director Rudolph Maté. He compiled an impressive resume as a cinematographer in Hollywood from 1935 (Dantes Inferno, Stella Dallas, The Adventures of Marco Polo, Foreign Correspondent, Pride of the Yankees, Gilda among others) until turning to directing in 1947. The lighting, locations, and atmosphere of brooding darkness were captured expertly by Mate and director of photography Ernest Lazlo."[5] Michael Sragow, in a review of a DVD release of the film, characterized it as a "high-concept movie before its time."[6]

In 2004, D.O.A. was selected for preservation in the United States National Film Registry by the Library of Congress as being "culturally, historically, or aesthetically significant."

The shot of Edmond O'Brien running down Market Street (between 4th and 6th Streets) in San Francisco was a "stolen shot," taken without city permits, with some pedestrians visibly confused as O'Brien bumps into them.

After "The End" and before the listing of the cast, a credit states the medical aspects of this film are based on scientific fact, and that "luminous toxin is a descriptive term for an actual poison." (Most likely phosphorus.[citation needed])

The rhythm and blues/jazz band playing at the Fisherman's Club while O'Brien's glass is being spiked was filmed on a Los Angeles soundstage after principal photography was completed. According to Jim Dawson in his 1995 book Nervous Man Nervous: Big Jay McNeely and the Rise of the Honking Tenor Sax, the sweating tenor saxophone player was James Streeter, also known as James Von Streeter. Other bandmembers were Shifty Henry on bass, Al "Cake" Wichard on drums, Ray LaRue on piano, and Teddy Buckner on trumpet. However, rather than use the live performance, the music director went back and rerecorded the soundtrack with a band led by saxophonist Maxwell Davis.[7]

D.O.A. was dramatized as a half-hour radio play on the June 21, 1951 broadcast of Screen Director's Playhouse, starring Edmond O'Brien in his original role.

The film was remade in Australia in 1969 as Color Me Dead directed by Eddie Davis.[8] In 1988 it was filmed again as D.O.A. directed by Annabel Jankel and Rocky Morton, with Dennis Quaid as the protagonist.[1]

In 2011, the Overtime Theater staged a world-premiere musical based on the classic film noir. D.O.A. a Noir Musical was written and adapted by Jon Gillespie and Matthew Byron Cassi, directed by Cassi, with original jazz and blues music composed by Jaime Ramirez. The new musical played to sold-out audiences during its five-week run. [9].

All compositions by Dimitri Tiomkin.[10]