The L98A1 Cadet GP Rifle (GP - General Purpose) is the standard for British Army, Air and shooting. This weapon was introduced alongside the series from 1989 onwards for cadet use, as at the time cadets were not permitted to fire semi- or fully-automatic weapons.

The GP rifle strips for cleaning almost identically to the but without the gas parts. It consists of: barrel and receiver, trigger mechanism housing (TMH), cocking handle and extension rod, carrier assembly, and the recoil rod assembly, all of which can be removed and reassembled without tools. The sights and hand guard can also be detached with the aid of the combination tool.

The GP is a manually-operated, straight-pull rifle and cannot fire semi- or fully-automatically. The SA80 IW and LSW are cocked via a cocking handle attached directly to the bolt carrier. The GP rifle, however, has a cocking handle extension piece, and is cocked with the right hand as opposed to reaching across and cocking with the left.

Before using the weapon with either blank or ball ammunition, cadets receive training in the safe use of the weapon. These are assessed through weapon handling tests (WHTs) carried out as part of regular training, and at the discretion of the range staff as necessary. Drills that are taught include: 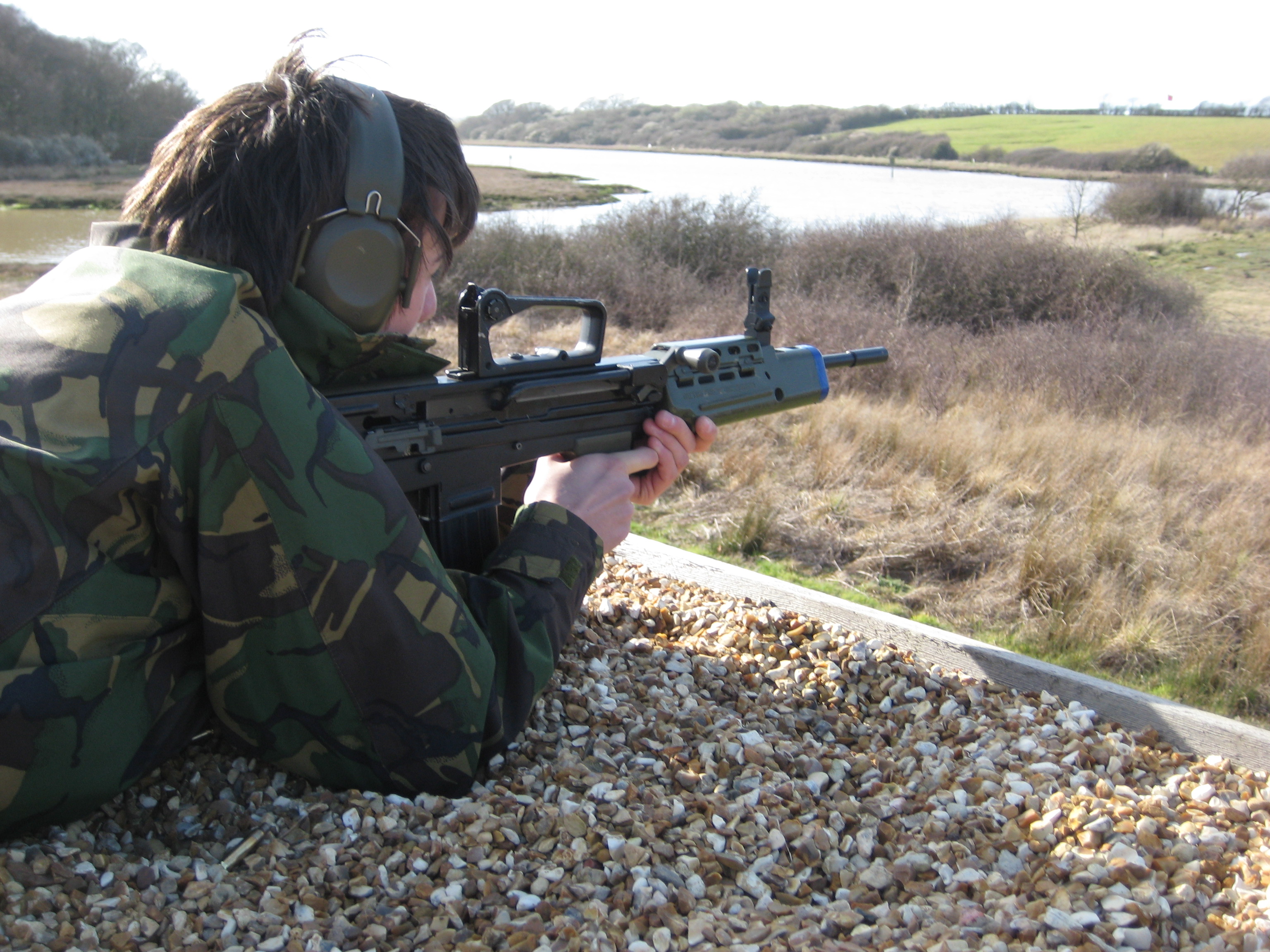 right|thumb|A Cadet affiliated to the Royal Signals fires the L98A1 Cadet GP RifleThe L98 is fitted with adjustable iron sights. It consists of a rear battle and leaf sight and a front blade sight. The front sight is mounted on a protrusion extending from the hand guard. The front sight assembly is clamped to the top of this and carries the front sight blade with protective fins either side.The foresight facilitates adjustment of elevation in increments of 2 minutes of angle. The rear sight is fitted to the rear of the carrying handle also adjustable in 2 minute increments .

The rear sight has an emergency battle sight, zeroed to 300 m, which flips over to reveal an adjustable leaf sight. By turning a range dial, ranges from 100 to 500 metres are available.

If available, the can be fitted to the GP though larger units such as the CWS night sight and the original SAWES laser training projector would foul the GP's larger cocking handle, whilst this does not prohibit their use on the weapon, it prohibits cocking the weapon, with them attached.

The L98 has a number of design features that cause problems when used by cadets, as well as problems inherent to the series.

Commonly, failing to pull the cocking handle fully to the rear results in a failed ejection of the previous round leading to a stoppage. Dirt and grit can foul the slide making the action harder to cycle further compounding this problem. Rain can also cause similar problems, as the rail along which the cocking handle slides is completely exposed to the elements, often causing the oil to wash off.

The pin securing the cocking handle to its connecting rod is also notoriously weak, often breaking during vigorous and prolonged use.

The removal of the flash suppressor on the L98 also prevents the fitting of the blank firing attachment for the L85A1 series or the use of the safe blank firing attachment (SBFA) for the A2 series. This increases the safety distance when firing from 1m to 50m and increases the opportunity for injury. The cadet GP is soon to be exchanged for a modified L85A2, this will be the same however it will have the benifit of "repetition" which means the rifle will not have to be cocked after every round. However it will still have an incorporated iron sight instead of a SUSATFact|date=October 2008.

Conversion kits exist which enable it to fire cartridges instead of the standard 5.56 mm NATO cartridge. This allows the weapon to be fired live on .22 ranges when full size military ranges are not available. The kit consists of a modified bolt carrier assembly, modified working parts (springs etc), a special magazine that is the same size and shape as the standard 5.56 mm magazine, and a special adapter, shaped like a 5.56 mm cartridge, which is fitted into the L98A1's breech and itself contains a smaller breech into which the modified bolt inserts the .22 cartridge. The modified magazine locks into the magazine housing exactly as a normal one would, the normal extended cocking handle is connected to the modified bolt carrier, and the method of operation is exactly the same as when using 5.56 mm ammunition. The conversion is not permanent and the kit can be fitted or removed from the weapon in as little time as it takes to normally strip and reassemble it.

The L98A1 is set to be replaced by the a version of the L85A2, being designated . The contracts were signed in Fact|date=August 2008. With the rifles being said to be issued between , and . As the Cadets will be receiving the A2, they will be able to participate in more active activities with the use of a BFA "()", thus enabling fieldcraft based activites such as FIBUA to be conducted.Fact|date=July 2008