Coalition forces of the Napoleonic Wars

Coalition forces of the Napoleonic Wars 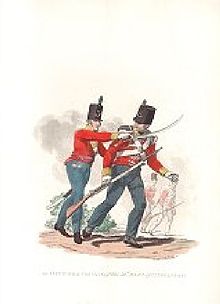 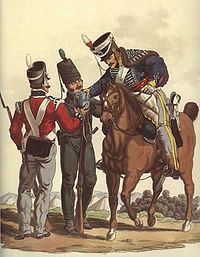 Soldiers of the King's German Legion

The Coalition Forces of the Napoleonic Wars were composed of Napoleon Bonaparte's enemies: the Austrian Empire, Kingdom of Prussia, Kingdom of Spain, Kingdom of Naples and Sicily, United Kingdom[1], Kingdom of Sardinia, Dutch Republic, Russian Empire, the Ottoman Empire, Kingdom of Portugal, Kingdom of Sweden, various Confederation of the Rhine and Italian states at differing times in the wars. Together at their height, the Coalition could field a formidable force of about 1,740,000 strong, a force the 1.1 million French soldiers would reckon with. These were the military manpower breakdowns of more active armies: Austria, 520,000; Britain, 320,000; Prussia, 300,000; and Russia, 600,000.

The British Army forces consisted of 320,000 troops at their height, a notable 2% of the entire British population at the time. Integral parts of the British army were the King's German Legion (18,000 men), the Brunswick troops and several other troops from France, Switzerland and the Netherlands.

Gaining experience under the Duke of Wellington in the Peninsular War and forged into a disciplined, honed weapon of war, they advanced to become a very prominent force in the Napoleonic Wars. The redcoats, as they were called, principally employed tactics such as disciplined platoon fire and (sometimes) bayonet charges and saw much success through these methods.

These foot soldiers were typically equipped with the Tower pattern musket, or 'Brown Bess', whose individual inaccuracy was compensated for by the technique of mass firing by platoons.

The British and German elite light infantry hold a distinct advantage over their counterparts on the battlefield as they were equipped with Baker rifles. However this rifle compromises loading speed, a fact that put Napoleon Bonaparte off using them, therefore were the French voltigeurs equipped only with muskets. The advantage of the rifles were the great accuracy of the weapon, due to the grooved barrels. The soldiers were able to shoot and hit the opponent at distances, where no musket would have an effect. Also the light battalions were deployed in pairs of 2 soldiers, forming a skirmish curtain, fighting quite independently and using all cover they could find. These were new tactics, frowned on by more conservative officers, but very effective against enemy officers, who were often the first targets of the skirmishers.

Mamluk cavalry charges French infantry square during the Battle of the Pyramids, painting by Wojciech Kossak .

The line, column and square formations were the most recognized tactical formations in use during the Napoleonic Era.[2] Each of these formations has its own unique purpose in attacking or counter-attacking the enemy and no doubt played a large role in battlefield tactics. The line formation was the most favored amongst the British infantry. The line formation offered the maximum firepower to any enemy, about 1000 to 1500 bullets per minute [3]. Unlike the French favored column formation, the line formation enabled all muskets available to fire at the enemy and it also forms a wider front, as in contrast, only the few soldiers in the first rows of the column (about 60) were able to fire.[4] While the line formation may have seemed to be the best against infantry, they were not protected from the rear. A leash of the enemy's cavalry would send the frail lines into chaos and horrendous casualties. Therefore it was necessary, to form the line into a square, as soon as possible, when cavalry was approaching. The square was the best protection against cavalry, as no horse would go near a row of bayonets three (or more) deep. Only on very rare occasions were these squares destroyed, e.g. at the Battle of Salamanca three French squares were destroyed by the cavalry of the King's German Legion. The bayonet was primarily used to finish an action, already virtually decided by musketry opposing regiments when formed in line and charging with fixed bayonets, 'never' meet a struggle hand to hand and foot to foot; and this for the best possible reason, that one side turns and runs away as soon as the other comes close enough to do mischief[5].Thus the fear of the bayonet, rather than the bayonet itself was the deciding factor. One of the few battles were the bayonet was used extensively was the Battle of Fuentes de Onoro.

The British infantry pay rates ranged from 22 shillings 6 pence per day for a colonel to as low as 1 shilling per day for a private.

Britain's war effort against France was always hampered by a shortage of cavalry. Its lack of numbers accompanied by poor leadership and indiscipline wasted not only good opportunities but also lives. The cavalry consisted of a few important ranks. Each played a different role in ensuring the army was an effective and formidable war machine.

The British cavalry had developed a few crucial tactics in which to out-do these opponents. Against infantry the British had an idea of planning a cavalry charge just after the enemy's infantry volley. This would minimize the number of muskets available to shoot at the cavalry as the infantry would be busy reloading. The infantry square formation was the best formation designed to outmaneuver the cavalry.

Britain had a small but highly effective artillery arm (the Royal Artillery) that was exceedingly well trained but suffered from light guns. British cannon barrels were brass, with the carriages, wheels, and timbers painted gray and metal pieces painted black. The basic guns were from three to six pounders, and the British found themselves at a distinct disadvantage against French cannons. In fact, the Duke of Wellington forbade his gunners to engage in counter-battery fire against the superior French weapons and ordered them to focus on firing at enemy troops. The artillery was divided in horse artillery and foot artillery. Each cannon was manned by five gunners.

The anti-personnel bias of British artillery was boosted by the invention of a fused spherical case-shot that was designed, by General Sir Henry Shrapnel, to explode over the heads of enemy troops and shower them with musketballs.

Another newfound British invention was the Congreve Rocket, which was intended to shoot a barrage of 12-pounder explosives in the general direction of the enemy.

Unfortunately, the rockets were not very accurate and although they did see action in Iberia, as well as in Germany, Battle of the Goerhde and Battle of Leipzig, they were not viewed as being particularly effective. Mostly they effected a terror in the enemy troops, who were unfamiliar with this kind of weapon. The French thought in the beginning, that the rocket troops were lancers, as the firing device seemed in the distance to be a lance.

The tactics of the allied forces were at the beginning of the wars different from the British tactics. They tried to use e.g. the column. But as they almost all lost against the French, they had to change and develop their systems. They became more and more similar to the British systems, although with differences, so was the Prussian line three men deep, in contrast to the two men line of the British army.

Kingdom of Naples and Sicily

The army of Portugal was in great need of modernization. Therefore quite a number of British officers joined the Portuguese army, rising in rank by that. They formed the army after the example of the British army and formed a force with great fighting spirit and skills. The caçadores were as effective as the British light infantry and fought side by side with their allies. The Portuguese units were attached to the British regiments, the Duke of Wellington being the commander of the joined forces. 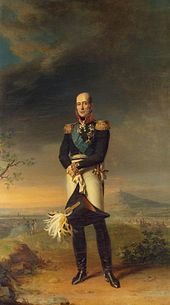 Portrait of Barclay de Tolly from the Military Gallery of the Winter Palace, by George Dawe.
Main article: French invasion of Russia

After the defeat of Spain and the deportation of the King and his family to France, the Spanish army in 1812 to 1814 was divided in several parts.

The Spanish troops in 1813 were about 160,000 men. Also very active were the Spanish guerilla troops, which were in 1812 the strongest forces Spanish forces.[8] They fought most of the time independently, but were also co-ordinated by the British. So was a guerilla force on the British right flank in the Battle of Fuentes de Onoro. 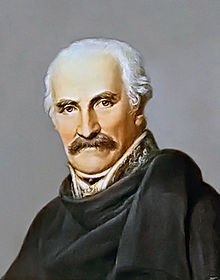