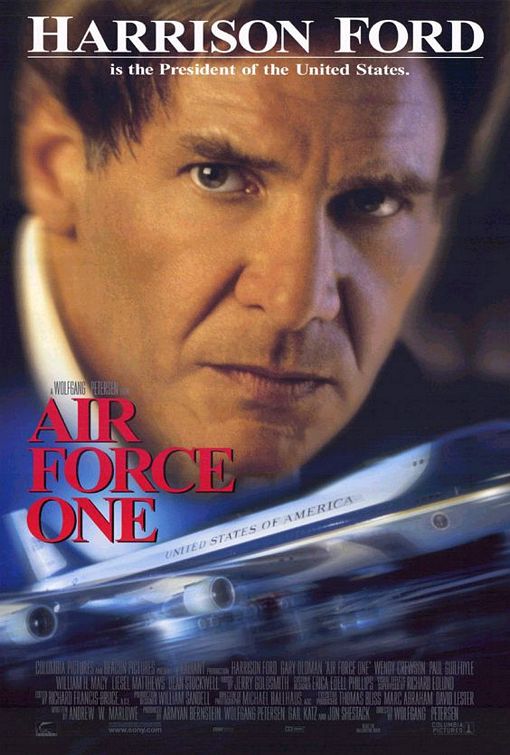 "Air Force One" is a 1997 action thriller film starring and , and featuring , and . It was directed by and written by .

While on a visit to , President James Marshall announces in a speech that the will not negotiate with terrorists, three weeks after an operation in which U.S. and n captured tyrannical leader of General Radek. With his visit to Moscow complete, the President is now on his way home to aboard . Unknown to security, Soviet neo-nationalists posing as a news crew have infiltrated the plane, and one of the President's Secret Service agents, Gibbs, is in league with the terrorists.

Once the plane is aloft, Gibbs kills three fellow agents before opening the on-board weapons locker. The terrorists, controlled by Ivan Korshunov frantically grab weapons and search the plane for Marshall, killing many passengers. They then take the remaining crew ( Lloyd Shepard, Military Advisor Major Caldwell, Jack Doherty, and Marshall's wife and daughter) . The flight crew declare an emergency and prepare to land at . The President is evacuated to an escape pod by numerous Secret Service agents, who are all gunned down. After inspecting terrorists assume he has escaped in the deployed pod, they all head to the cockpit. Surprisingly, Marshall comes out of hiding and retreats to the baggage deck. Meanwhile, the terrorists kill the pilots and take control of the plane, which takes off again to the surprise of the standby Ramstein ground crew and security forces.

In Washington, Vice President Kathryn Bennett arrives at the , assessing the situation alongside Walter Dean and other officials. They soon learn that Marshall did not board the escape pod and could be either dead, a hostage, or hiding somewhere onboard. The terrorists call the Vice President, demand the release of General Radek and threaten to begin executing hostages one by one every half an hour. This threat is soon realized when Security Advisor Doherty is executed after Bennett calls to report that Russian President Petrov will not release Radek, but tells Bennett he would do so only to save the President.

Still on the baggage deck and having already killed one terrorist, Marshall finds a . While Marshall is attempting to call the White House, a second terrorist finds and detains him. The call nevertheless reaches the . Marshall manages to covertly order an attack on Air Force One so he can subdue the terrorist, explaining that the airplane's countermeasures would sharply turn the plane (and knock his assailant off balance). The plan works, and Marshall attempts a to land the plane. Recognizing the presence of someone on the baggage deck (the terrorists assume him to be a Secret Service agent), Korshunov executes Melanie Mitchell in an effort to force Marshall's surrender. While two of the terrorists attempt to restore the fuel controls, Marshall slips by and subdues another terrorist, using his keys to free the hostages. Major Caldwell proposes a ruse whereby an aerial refueling tanker could force Air Force One to an altitude that permits parachuting from the rear of the plane. The idea is put into action and most of the hostages escape with parachutes, but the tanker explodes when the terrorists discover the evacuation at the rear of the plane, stranding Caldwell, Shepard and Gibbs (all of whom insisted on staying with the President after Marshall refused to leave without his family). President Marshall and his family are all then captured and taken to Korshunov.

Korshunov abuses the President and then convinces him to call Petrov to secure Radek's release by threatening his daughter. In Washington, Dean persuades the Cabinet to sign a letter declaring President Marshall incapacitated in accordance with the , but Bennett refuses to sign it. As Radek's release is prepared, Marshall and the hostages free themselves and kill the remaining terrorists, but Korshunov captures the First Lady and shoots at the President. Shepard saves him by blocking the bullets with his body while Korshunov flees to the parachute ramp. In a vicious fight, Marshall manages to eject Korshunov from the aircraft by deploying his parachute while a is wound around his neck, fatally breaking it. Marshall then calls Petrov moments before Radek's release, and the prison guards gun down the former general as he flees.

Kazakh MiG-29 fighter jets loyal to Radek soon reach Air Force One and inflict serious damage to its engines in retaliation. US F-15 fighters intercept and fend off the hostile aircraft, shooting down several. Although one of the US fighters sacrifices itself to save Air Force One from a missile, heavy damage is inflicted on the plane from enemy fire, rendering it unlandable. An air-to-air flying fox rescue from a C-130 is hastily arranged, but before the evacuation can be completed, the damaged plane begins a rapid descent with Marshall, Caldwell, and Gibbs still aboard. Marshall insists on rescuing his family and the wounded Shepard before he evacuates the plane. Once it is the President's turn to leave, Gibbs drops all pretense, killing Caldwell and the Air Force parajumper, and attempts to secure his exit at the President's expense. Marshall fights with Gibbs and escapes on the , leaving a despairing, screaming and crying Gibbs aboard the doomed VC-25 as it crashes into the . The C-130 announces that it is changing call signs to Air Force One (indicating the president is aboard), and the film ends with the plane flying towards safety with the aboard and the return of USAF jets.

President saw the film twice and gave it good reviews. He noted, however, that certain elements of the film's plane, such as the escape pod and the rear parachute ramp, did not reflect actual features of Air Force One. [http://www.garyoldman.twistedlogic.nl/item5b.html The Dark Side of Gary Oldman. "Air Force One (1997)" ] Because the exact details and features of the plane are highly , this cannot be confirmed.