Methylene blue (CI 52015) is a heterocyclic aromatic chemical compound with the molecular formula C16H18N3SCl. It has many uses in a range of different fields, such as biology and chemistry. At room temperature it appears as a solid, odorless, dark green powder, that yields a blue solution when dissolved in water. The hydrated form has 3 molecules of water per molecule of methylene blue.[1] Methylene blue should not be confused with methyl blue, another histology stain, new methylene blue, nor with the methyl violets often used as pH indicators. 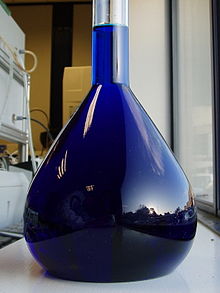 A volumetric flask of a methylene blue solution

Methylene blue is widely used as a redox indicator in analytical chemistry. Solutions of this substance are blue when in an oxidizing environment, but will turn colorless if exposed to a reducing agent. The redox properties can be seen in a classical demonstration of chemical kinetics in general chemistry, the "blue bottle" experiment. Typically, a solution is made of glucose (dextrose), methylene blue, and sodium hydroxide. Upon shaking the bottle, oxygen oxidizes methylene blue, and the solution turns blue. The dextrose will gradually reduce the methylene blue to its colorless, reduced form. Hence, when the dissolved dextrose is entirely consumed, the solution will turn blue again.

Methylene blue is also a photosensitizer used to create singlet oxygen when exposed to both oxygen and light. It is used in this regard to make organic peroxides by a Diels-Alder reaction which is spin forbidden with normal atmospheric triplet oxygen.

The formation of methylene blue after the reaction of hydrogen sulfide with dimethyl-p-phenylenediamine and iron(III) at pH 0.4 – 0.7 is used to determine by photometric measurements sulfide concentration in the range 0.020 to 1.50 mg/L (20 ppb to 1.5 ppm). The test is very sensitive and the blue coloration developing upon contact of the reagents with dissolved H2S is stable for 60 min. Ready-to-use kits such as the Spectroquant sulfide test[4] facilitate routine analyses. The methylene blue sulfide test is a convenient method often used in soil microbiology to quickly detect in water the metabolic activity of sulfate reducing bacteria (SRB). It should be observed that in this test, methylene blue is a product of reaction and not a reagent.

The addition of a strong reducing agent, such as ascorbic acid, to a sulfide-containing solution is sometimes used to prevent sulfide oxidation from atmospheric oxygen. Although it is certainly a sound precaution for the determination of sulfide with an ion selective electrode, it might however hamper the development of the blue color if the freshly formed methylene blue is also reduced, as described here above in the paragraph on redox indicator.

A color reaction in an acidified, aqueous methylene blue solution containing chloroform can detect anionic surfactants in a water sample. Such a test is known as an MBAS assay (methylene blue active substances assay).

The MBAS assay cannot distinguish between specific surfactants, however. Some examples of anionic surfactants are carboxylates, phosphates, sulfates, and sulfonates.

It can also be used as an indicator to determine if a cell such as yeast is alive or not. The blue indicator turns colorless indicating living cells. However, if it stays blue it doesn't mean that the cell is dead or there are no cells. Methylene blue can inhibit the respiration of the yeast as it picks up hydrogen ions made during the process and the yeast cell cannot then use those ions to release energy.

In neuroscience, methylene blue can also serve as a non-selective inhibitor of NO synthase.

Methylene blue is a component of a frequently prescribed urinary analgesic/anti-infective/anti-spasmodic known as "Prosed", which also contains methanamine, hyoscyamine sulfate, and salicylate. A similar, more popular combination medication known as "Urised" (and its generic counterparts) was discontinued in 2007, quite possibly because of the way in which methanamine was included into the formulation (and its ease of separation from the other components of the medication), and the fact that methanamine is a precursor to methamphetamine, making it a target for clandestine use. The new formulation ("Prosed") sequesters the methanamine using a method which makes its separation nearly impossible.

Methylene blue was identified by Paul Ehrlich about 1891 as a successful treatment for malaria. It disappeared as an anti-malarial during the Pacific War in the tropics, since American and Allied soldiers disliked its two prominent, but reversible side effects: turning the urine green, and the sclera (the whites of the eyes) blue. Interest in its use as an anti-malarial has recently been revived,[8] especially due to its low price. Several clinical trials are in progress, trying to find a suitable drug combination. Initial attempts to combine methylene blue with chloroquine were disappointing;[9] however, more recent attempts have appeared more promising.

Methylene blue combined with light has been used to treat resistant plaque psoriasis,[12] AIDS-related Kaposi's sarcoma,[13] West Nile virus,[14] and to inactivate staphylococcus aureus,[15] HIV-1,[16] Duck hepatitis B,[17] adenovirus vectors,[18] and hepatitis C.[19] Phenothiazine dyes and light have been known to have virucidal properties for over 80 years.[20] In some circumstances, the combination can cause DNA damage that may lead to cancer.[21][22]

Methylene blue also blocks accumulation of cyclic guanosine monophosphate (cGMP) by inhibiting the enzyme guanylate cyclase: this action results in reduced responsiveness of vessels to cGMP-dependent vasodilators like nitric oxide and carbon monoxide. Cardiac surgical teams have found this very useful in the treatment of extremely low blood pressure (hypotension)which may occur during heart surgery requiring cardiac bypass.[24] Similar use is noted in the treatment of hypotension associated with overwhelming infections (sepsis).[25]

Since its reduction potential is similar to that of oxygen and can be reduced by components of the electron transport chain, large doses of methylene blue are sometimes used as an antidote to potassium cyanide poisoning, a method first successfully tested in 1933 by Dr. Matilda Moldenhauer Brooks in San Francisco.[26]

Methylene blue was also used in the mid-twentieth century in the treatment of carbon monoxide poisoning.[26]

Methylene blue is used in endoscopic polypectomy as an adjunct to saline or epinephrine, and is used for injection into the submucosa around the polyp to be removed. This allows the submucosal tissue plane to be identified after the polyp is removed, which is useful in determining if more tissue needs to be removed, or if there has been a high risk for perforation. Methylene blue is also used as a dye in chromoendoscopy, and is sprayed onto the mucosa of the gastrointestinal tract in order to identify dysplasia, or pre-cancerous lesions. Intravenously injected methylene blue is readily released into the urine and thus can be used to test the urinary tract for leaks or fistulas.

In surgeries such as sentinel lymph node dissections, methylene blue can be used to visually trace the lymphatic drainage of pertinent tissues. Similarly, methylene blue is added to bone cement in orthopedic operations to provide easy discrimination between native bone and cement. Additionally, methylene blue accelerates the hardening of bone cement, increasing the speed at which bone cement can be effectively applied.

It can also be used to stain lymph nodes.

Methylene blue has been used as a placebo; physicians would tell their patients to expect their urine to change color and view this as a sign that their condition had improved.[27] This same side effect makes methylene blue difficult to test in traditional placebo-controlled clinical studies.[28]

TauRx Therapeutics has reported that methylene blue (methylthioninium chloride), under the tradename Rember, may provide a way of halting or slowing the progression of Alzheimer's dementia.[33] However, the formulation used was different from that commonly available as a medicine and caution has been expressed about use of methylene blue as a treatment for Alzheimer's.[34] TauRx Therapeutics has suggested that the mechanism by which methylene blue might delay or reverse neurodegeneration in Alzheimer's disease is as an inhibitor of Tau protein aggregation. While methylene blue arguably has an effect on Tau aggregation, it also has an effect on mitochondrial function which is likely to play an important role. In vitro studies suggest that methylene blue might be an effective remedy for both Alzheimer's and Parkinson's disease by enhancing key mitochondrial biochemical pathways. It can disinhibit and increase complex IV, whose inhibition correlates with Alzheimer's disease.

Methylene blue might also delay senescence as one study has shown that it extended the lifespan of IMR90 fibroblasts by more than 20 population doublings.[35]

These findings are highly controversial,[citation needed] and a clear dosage response curve has not been found.

Methylene blue is used in aquaculture and by tropical fish hobbyists as a treatment for fungal infections. It can also be effective in treating fish infected with ich, the parasitic protozoa Ichthyophthirius multifiliis. It is usually used to protect newly laid fish eggs from being infected by fungus or bacteria. This is useful when the hobbyist wants to artificially hatch the fish eggs. Methylene Blue is also very effective when used as part of a "medicated fish bath" for treatment of ammonia, nitrite, and cyanide poisoning as well as for topical and internal treatment of injured or sick fish as a "first response".[36]

It is, or was at one time, a common prank among college students in biomedical fields to spike someone's drink with methylene blue, thus creating amusement at the victim's expense when he reacts with alarm to his urine turning blue. With concern over date rape drugs, spiking someone's drink is considered far more serious than it used to be, and the prank has somewhat gone out of fashion.[37]

As a plot device

An episode of M*A*S*H, "Sons and Bowlers", showed Major Winchester using a dose of methylene blue to take down a rival camp's bowling champion—who had been a high-ranked professional bowler in civilian life—during a contest. The champ panics when his urine turns blue, and listens to Winchester's advice to refrain from all exercise – including bowling, which allows the 4077th to win.

In the 1946 film noir, Decoy, the chemical is portrayed in an entirely different manner - as having resuscitation qualities – in that it is used successfully to bring a criminal back to life after execution by hydrocyanic gas.[38][39]