Chicanismo is a cultural movement begun in the 1960s in the Southwestern United States by Mexican Americans to recapture their Mexican, Native American culture.

The four major themes of Chicanismo are generally considered to be: (1) the power of the creative earth and labor upon it; (2) political transformation through collective efforts; (3) strong familial ties extending back into Mesoamerican pre-history; and (4) spiritually-influenced creative artistic imagination as reflected in the visual ARTS.

Origins of the phrase

According to San Francisco State University professor José B. Cuéllar, the first documented use of "chicamo" (not "Chicano") was around 1900, when "American Mexicans" in Texas used the phrase chicao as a derogatory term for more recently arrived mexicanos.[1].

The East Palo Alto, California Association states "the most likely source of the word is traced to the 1930 and 1940s period, when poor, rural Mexicans, often native Americans, were imported to the US to provide cheap field labor, under an agreement of the governments of both countries." [2]

Professor Cuellar opines that during the late 1950s the meaning of "Chicano" largely transformed from a negative signifier of "Mexican immigrant" into a positive self-identifier of "U.S. natives of mexicano descent." By 1959, high school students of Mexican descent identified themselves proudly as "Chicano". He notes that in the 1990s, other Latino groups began to use the phrase "Chicano" to describe themselves. 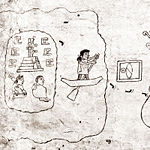 Our Lady of Guadalupe