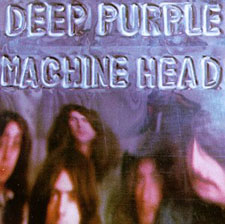 "Machine Head" is the sixth studio album. It was recorded at the Grand Hotel Montreux, Switzerland in December 1971 with the Rolling Stones Mobile Studio, and released in March 1972.

The album is often cited as being very influential in the development of the heavy metal music genre. It is Deep Purple's most successful recording, topping the charts in several countries following its release. In 2001 "Q" magazine named it as one of the 50 Heaviest Albums of All Time.

"Machine Head" is the subject of one of the "" series of documentaries about the making of famous albums. "Machine Head" was released on the multichannel formats (2003) and (2001).

The conditions in which the original recordings were made are quite outstanding. Hiring the Rolling Stones Mobile One equipment and studios, the band recorded the entirety of the tracks in a Montreaux hotel facilities, with no overdubs. The "Smoke On The Water" lyrics' citation "Frank Zappa and the Mothers" indicates Zappa's show at a casino that was burned down a few days earlier from the start of scheduled start of "Machine Head"s recording sessions.